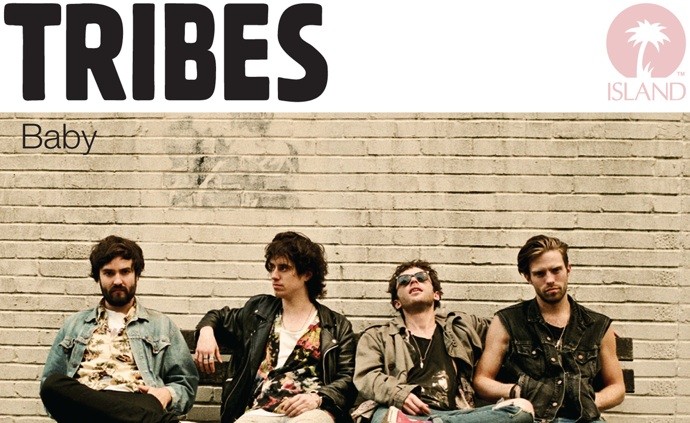 Louder Than War offer our sincerest apologies. We’re a little late off the mark with Tribes’ debut album review,(but not with a live review, we were one of the first to review them last June) but Tribes are a little late on the 90s grunge bandwagon, so it’s only fitting.

The guitar-wielding London cohort offer; no-frills, no strings attached melodic rock and roll. They don’t offer high levels of personal hygiene or band members you could take to your gran’s for Sunday dinner. Their debut album. Baby (out now), is an 11 track relentlessly hormonal lust story of adultery, aspirations and slackery. Debut single ”ËœSappho’ attempts to recycle the tried and tested formula of ”Ëœshe’s a bit of a femme fatale but she’s a keeper’ lyrical topic you may have noticed from the repertoire of any self-respecting male musician ever to have picked up a guitar. However, it’s so good you almost forgive them. The album kicks off on a high with the anthemically raucous ”ËœWhenever’, a song about as sunshine and optimism laced as grunge ever gets. But it’s impossible to accuse Tribes of just making a racket, ”ËœCorner of An English Field’ (a tribute to Charlie Haddon of Ou Est Le Swimming Pool) is an altogether gentler giant.

Tribes don’t even attempt to deny their influences. The nostalgia-saturated ”ËœWe Were Children’ unashamedly declares “we were children in the mid-nineties“… I’m not quite sure what this is supposed to prove. As a product of the nineties myself, I have been instilled me with an inherent knowledge of Spice Girls trivia and the rap from ”ËœThe Fresh Prince of Bel Air’. It’s not really something worth shouting about, but it highlights the fact that the album is essentially diluted microcosm of the Britpop genre, compressed for the Radio 1 masses. Yet by the looks of this years’ BRIT nominations, old is the new ”Ëœnew’; Blur and the Gallaghi have a scheduled lap of honour. (Please suspend disbelief that the BRIT Awards are even relevant in the grand scheme of things, for the moment. I’m trying to make a point).

That’s not to say Tribes don’t have a few things going for them. Unlike fellow Britpop compatriots Viva Brother, they don’t make you want to tear out your eardrums and bury them in a time capsule until the music industry grows up a bit. Baby the soundtrack to teenage air-guitar playing and fist pumping in bedrooms across the land, and if they’d released a noughties-influenced album called ”ËœAdolescent’, we’d much rather mindlessly chant and jump about to Baby any day.