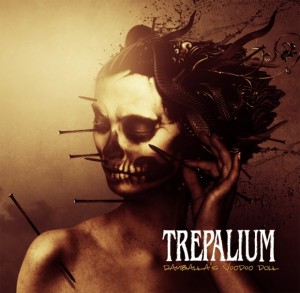 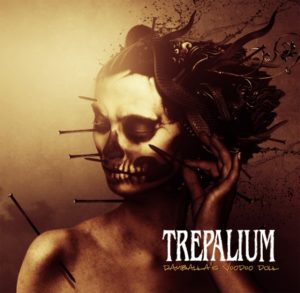 The first thing I thought when I finished listening to Trepalium’s Damballa’s Voodoo Doll, an honest to God “swing metal” album, was “Are they serious?”

You have to understand, I’m not sheltered musically. I’ve heard some truly bizarre things in my time, ranging from music made from randomly generating machines to 1-bit symphonies, but swing-metal threw me for a loop. I wondered what group of people could ever be exposed to both At The Gates and Bennie Moten at the same time and enjoy them both equally.

I assumed that the members of Trepalium must have been relatively young people that grew up in the information age. I couldn’t imagine a genre like this being created without the help of the internet.

Doing a little bit of research, I learned that Trepalium have been a band for 15 years and have amassed a decent following in their home country of France.

What a time to be alive!

You know what? I’m glad Trepalium exists and have eked out some success for themselves. It just means that we’re one step closer to stepping away from the kvlt, frostbitten boredom that has ensnared metal for several decades now. ‘Bout time!

Unfortunately, the music doesn’t quite live up to the high concept. It’s not bad by any means, but it never pushes itself into “great” territory.

The first track on the album, Moonshine Limbo, begins with crowd noise and broken bottles before jumping into sampled big-band horns and melodeath chugging. Think Dark Tranquility if they paid even more attention to the low E string.

This track then segues into a rather extended big band section. Perfect for flappers, dewdroppers, and wise-guys.

It’s a great song, the problem is that almost every other song follows it’s formula. Besides a couple of standouts, every song starts with a swing intro, goes into a heavy part, returns to swing, and then ends in a heavy part. As instrumentally impressive as these songs are, they become a little bit boring.

Possessed By The Nightlife is a highlight. Although it maintains the formula, a vocal guest appearance by Joe Duplantier of Gojira and an excellent guitar solo bring a sense of life that is not really present on a lot of these songs.

The EP breaks from the swing formula with Fire On The Skin, a track that is full on melodeath in the vein of Amon Amarth. It’s refreshing, if a little generic.

Damballa’s Voodoo Doll is certainly a fun, unique EP, but it is not varied enough to be truly great. With that said, any band dedicated to breaking down musical genres is worth a listen.