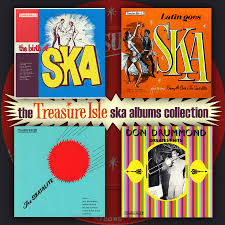 Twofer including the Treasure Isle 60s albums, The Birth Of Ska, Latin Goes Ska, The Skatalite! and Don Drummond Greatest Hits, plus a raft of extras recorded around the same time for Duke Reid’s label. LTW’s Ian Canty hears the results of the ever-resourceful Jamaican music scene when the US R&B well ran dry.

As the 1950s drew to a close, the men who ran the sound systems which drove Jamaica’s music scene were faced with a conundrum. The raucous jump blues and R&B boogie that set the lawns dancing on the island were in decline in the US. The vast majority of discs that drove the systems came from there, and new material was always needed to keep the system’s operator ahead of the game. The demand was still there, but the supply was running out with the change of fashion. For Duke Reid, it was doubly important that a resolution was found, as he had to keep his dances fresh with new dance smashers. He also ran his own radio show into the bargain. His and others’ actions to remedy this situation would set in motion a course of events which would furnish the island with its first international popular music successes and build thousands of careers along the way.

It was simple really; the best ideas always are. When you can’t get new recordings from the USA, do it yourself. At first there was a resistance from some dance patrons and even system operators to the home-grown sounds, but steadily the Jamaican musicians’ offerings took over the lawn dances. A natural heavy blues influence was present and it is easy to hear that boogie-woogie and (what would soon become) ska shared similar traits.

The musical set-up of the bands that took these faltering steps to the future were largely in the jazz mode where they learnt their chops, with full horn sections, piano and the warm sound of an upright bass. Added to that, through design or error, motifs of more local musical forms began to show up. The vocal lines and song lyrics, on occasion, showed their debt to calypso, the sometimes satirical music form that had first been established on nearby Trinidad and Tobago a century earlier, when a more exotic rhythm base was the in thing. Local indigenous drumming that Rastafarian groups played added a different beat and as all these things combined, a new musical form was born.

Soon this local phenomenon was given the name ska. There seems to be no definitive answer on why the moniker was arrived at, with one theory stating the guitar on these early recordings made a sound like the word ‘skat’ and it was further abbreviated from that. Reid was initially not a fan of ska, branding it simplistic and sticking with a slow flow of US imports more to his taste. But he soon came around and when he moved onto Bond Street and his new premises (complete with the Treasure Isle recording studio), his label swiftly became a byword for quality ska.

He called on a raft of expert musicians including the Skatalites to provide a winning beat and with a lot of early ska being purely instrumental, the trombone of the ill-starred Don Drummond and saxophones of Roland Alphonso, Lester Sterling and Tommy McCook floated into the place normally occupied by vocals. When it came to singers, he also had aces of the likes of Justin Hinds and the Dominoes and Stranger Cole to turn to.

Of course these early Ska recordings were purely designed as seven-inch singles, fodder for the dances that drove Jamaican music at the time. As the 60s wore on, though, the Duke among others saw that the album format provided a lucrative second life for the single cuts that had become played out at the lawns, particularly overseas where ska was making a mark. Compilations of his work began to emerge, with the young modernists in the UK, digging that driving beat at clubs like The Scene in Ham Yard, soon looking to have a bundle of these sounds on one disc. One of the first of these collections was aptly entitled the Birth Of Ska. Released way back in 1962, the record kicks off this new collection.

Bookended by Justin Hind’s classics, Carry Go Bring Home and Corner Stone, in between we have a mainly instrumental selection from the Treasure Isle archives, but a stellar example of the form. Eric Morris’ Strong Like Sampson is very catchy and harks a little back to calypso in its storytelling structure. Baba Brooks and his Band cut loose in fine style on River Bank Part 2 and Roland Alphonso scores with the lazy, loping vibe of Feeling Fine. Two duets between Stranger Cole and Patsy (Todd) sail close to the type of R&B that was a key ingredient in ska, but they do so with a great deal of charm. The Birth Of Ska is a winning combination of great tunes, excellent playing and good vocal cuts.

Next comes Latin Goes Ska, which kicks of with Lester Sterling’s woozy and wonderful title track. There’s a bit of gospel influence on Dotty and Bonny’s Sun Rises and Roland Alphonso’s classy and brassy Yard Broom is a real treat. Street Corner finds the Skatalites at their peak, with Don Drummond’s trombone finesse much in evidence and Open The Door is a great duet by Clive Wilson and Naomi Campbell, with a musical drive that recalls Prince Buster’s Madness. Duke Reid himself gets in on the act with Night Food that has some great guitar on it and Dotty and Bonny are back to close out the album with the excellent lurching rhythm of Foul Play.

In addition to these two full LPs we get another 6 bonus tracks with Baba Brooks’ first part of River Bank, which completes the picture started by the track on The Birth Of Ska and the smart and speedy Penny Reel (which also provided a name for the late, great reggae writer from the NME) by Eric Morris being stand outs. We also have the bawdy I Want My Cock by Owen and Leon Silvera showing the ribald side that was always present on the Jamaican music scene.

Moving over to disc two, The Skatalite! and Don Drummond Greatest Hits are somewhat shorter selections, given their crossover with the previous two albums. The Skatalite! only has a scant seven tracks, however it does benefit from the inclusion of Stranger Cole’s Rough And Tough – a classic that raised the bar for vocal ska. Of the others, Dan De Lion captures the Skatalites at their breakneck best. The Don Drummond selection features eight tracks with his trombone contemporary, Rico featuring on Let George Do It, fussy drums out front and led by a sonorous bass line. Silver Dollar though, was the ill-starred Drummond’s calling card, is a fine piece of instrumental ska. Sadly, by the time this album emerged in 1969, Drummond was dead, having languished in Bellevue Asylum for four years after killing his girlfriend in 1965.

Because of the truncated nature of these two albums, there is room for 13 bonus tunes on this disc and thankfully these tracks have many sure-fire winners among them. Eric Morris again shows his worth on Solomon Grundy; the nursery rhyme is given a solid ska setting and the Richards Brothers’ appealing vocal group sound on their I Shall Wear The Crown makes for good listening too. We Two Happy People shows the genuine joy that ska vocals could muster, with Stranger and Patsy putting in great performances as always. Rude Boy by Roland Alphonso is a bluesy stomp and the title one of the first references to Rudies way back in 1963. The sound of Watermelon Man by Baba Brooks is a tight near R&B rhythm with a focus on the horn section – a real winner and very danceable. There’s lots to love here.

The creators of these tunes could never have foreseen their longevity, but they come up fresh even after all the years since they were put on tape. People say certain things are dated, but to me it is all in the mind. Yes, if you only know ska from the Specials or ska-punk, it is going to take a bit of adjustment. These grooves were purely built for the dances, by musicians mainly schooled in jazz and/or blues, but their appeal has endured and there’s a whole bundle of excellence present in the 58 tracks of The Treasure Isle Ska Albums Collection. It is the true feel-good music for me. I found it impossible to remain in a grump whilst listening to this and if that isn’t something to treasure in 2019, I don’t know what is.