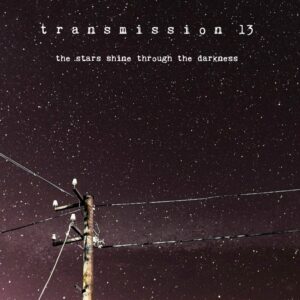 Transmission 13 – The Stars Shine Through The Darkness

Set against a backdrop of the universe and space travel, the album transcends ambient and drone to great effect with added soundbytes and vocals making it a very complete affair. Indeed, when the stillness is broken and heavier sounds come into place, the atmosphere is simply intensified.

If there is a trademark sound to Transmission 13 then is maybe comes on Ignition Sequence Start! a track with percussion from guest and previous collaborator Antonio de Braga over a delicate piano and sounds of astronauts speaking from space.

The Stars Shine Through The Darkness is possibly the natural accompaniment to Public Service Broadcastings Race For Space and it calms and caresses in equal amounts with the interspersion of tracks like Nebula that break the calm with incredible bursts of sound and power. This is no ordinary ambient album, Transmission 13 may well be breaking a mould here and creating something very special.

Perhaps unfolding the journey to space around the planets and back to Earth, the mood of the twelve tracks swings superbly and the thought and attention to detail that has gone into it is clear to see. The beautiful Showdown shimmers like a twinkling star before 6am/Heligoland creates a gentle pulsating beat.

Under The Volcano maybe introduces the possibility of alien life as screeches and echoes reverb around a timeless cavern, and the title track, present in two parts, which begin and end the album wrap the collection in a warm, comforting eternity.

Yet another fine album by an artist that never fails to impress.

The Transmission 13 Soundcloud page is here: soundcloud.com/transmission-13. T13 can be followed on Twitter as @transmission13 and liked on Facebook.