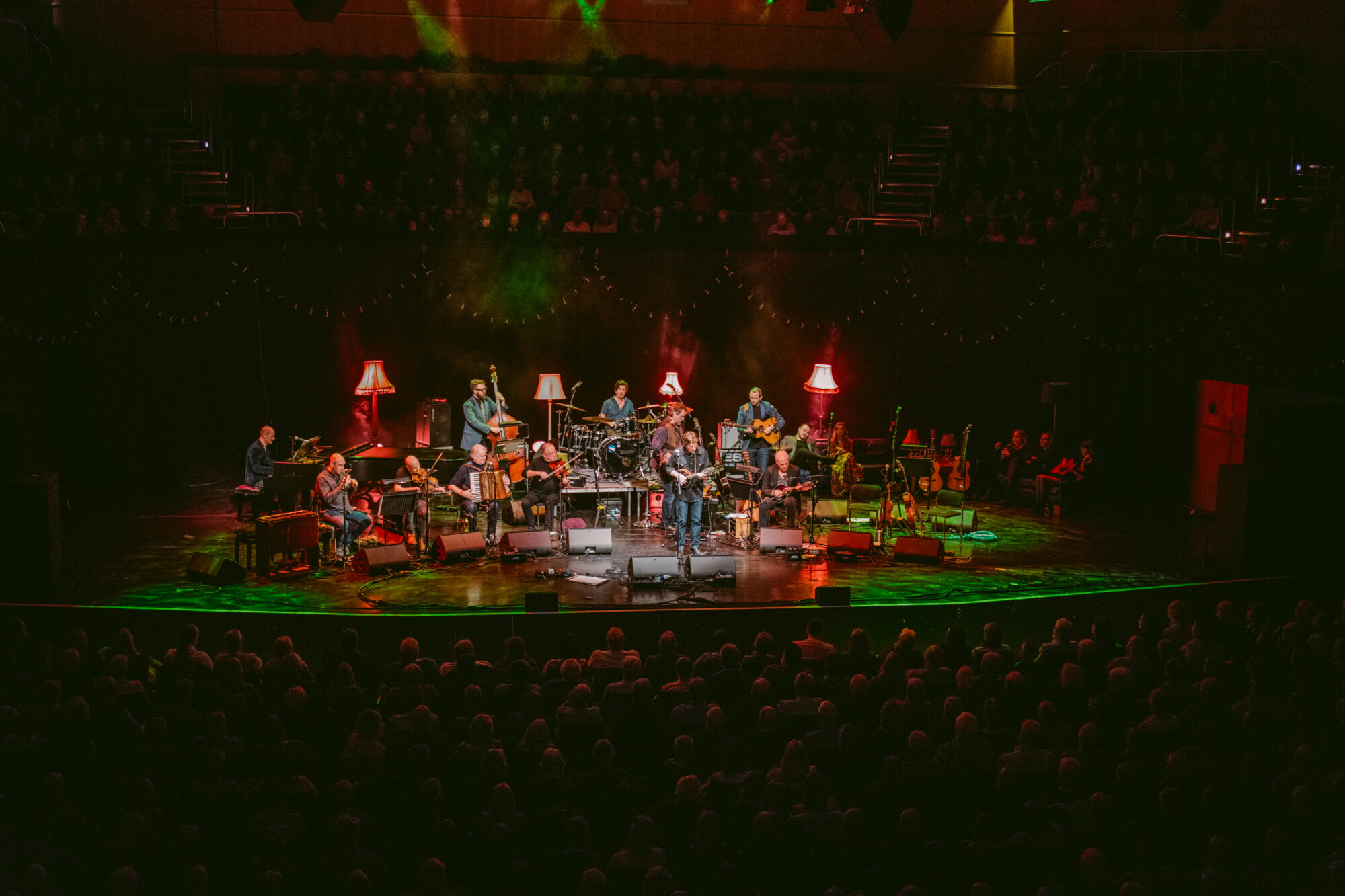 Sublime cross-Atlantic Celtic airs fill The Forum in Bath as Transatlantic Sessions ends its UK tour with a flourish.

‘It’s the last night of the tour, we know what we’re doing now, says American dobro and lap-steel guitar genius Jerry Douglas with unabashed modesty as this big ensemble open tonight with the jigging Irish barn dance of Waiting For The Federals.

These musicians and vocalists would undoubtedly know what they’re doing blindfold and with their hands tied behind their backs, they’re that good. This latest mix of North Atlantic folk, country and bluegrass luminaries – American, Irish and Scottish –  to the Transatlantic project, which started off 27 years ago, make their art look simply effortless.

It’s astounding stuff. Thirteen bodies on stage in total brewing up an intoxicating blend of beautifully evocative music, with the five main vocalists taking it in turn to front the band in real session style.

First up is Irish legend Paul Brady with a couple of low-key country-tinged numbers, Money To Burn and Harvest Time, and then Scottish singer Siobhan Miller ups the mood with a jaunty tune followed by the haunting May Morning Dew featured on her last album All Is Not Forgotten.

Flitting from the mists of Scotland to the creole blues of Haiti, Haitian-American singer Leyla McCalla (formerly of Carolina Chocolate Drops and Our Native Daughters) gives us a sublimely soulful ballad Ain’t No Use, a ‘Haitian-Celtic collaboration’ to use her own words, while playing the cello. She returns later for her stunning A Day For the Hunter, A Day For The Prey a song about the Haitian refugee crisis of a few years ago resonating with current day refugee crises globally. Building up the rhythm of the song by striking the strings of her cello with a bow it builds up with Irish influences seeping in marvellously.

Stunning is a word that can be used freely about all of the performances on show here without fear of over-statement really. From Lafayette, Louisiana, Cajun supremo Dirk Powell (who apparently rustles up a mean gumbo dish) steps forward with the soaring The Bright Light Of Day and the Irish-tinged country of Walking Through Clay, a song about his great-great-grandmother’s 100-mile trek to escape Confederate soldiers in the American Civil War, pregnant with his great grandfather!

Stories abound in these songs and music. After Irish guitarist John Doyle has regaled us with the gruesome subject of his False Lady, featuring some great duelling between his guitar and the flute of John McCusker, it’s the phenomenal vocals of Texan singer-songwriter Sarah Jarosz that notch things up even more with Blue Heron from her Blues Heron Suite album of last year and her absolutely gorgeous rendition of Bob Dylan’s Ring Them Bells.

Jarosz begins the second half of the concert after the interval with a boldly beautiful experimental piece between herself and Douglas’s steel slide. Just vocal sounds and instruments in a lovely jazzy exercise.

The eclecticism continues with Dirk Powell’s Waterbound, a slow-burner of exquisite quality about his grandfather, a hero to him as a child, the pipes and violin of Michael McGoldrick and John McCusker embellishing the mood, and then big Phil Cunningham, Scottish accordion master, introduces a classic mournful air with a story about how he’d played it at countless ‘burials’ over the years and how it had always gone down well. “They dug a lot of septic tanks back then”.

The humour and the dexterity, the connectivity, influences, and simple joy of these musicians is infectious.

Siobhan Miller plays on the connectivity theme with While The Whole World Sleeps, Paul Brady joins her for the traditional The Cocks Are Crowing, written by County Derry singer Eddie Butcher (he had “an abattoir of songs” according to Phil Cunningham).

The house band’s reels, airs and jigs fill the ornate insides of The Forum once more as they did before the interval. Sarah Jarosz performs the plaintive lushness of Hometown, McCalla does her immense Haitian/Celtic groove, and Brady plays a country holler.

The encore has to come and does. Celtic connections soar again as the band play on…