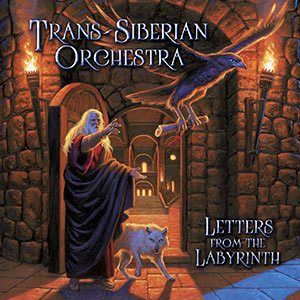 Trans-Siberian Orchestra: Letters From The Labyrinth

The brainchild of Paul O’Neill – producer/composer being just a couple of the hats he wears – the first new Trans-Siberian Orchestra studio album for five years sees a slight shift in direction with what O’Neill has labelled the band’s “first  hybrid album.”  Maintaining his original vision for a band  which was both theatrical and conceptual,  he’s once again brought his high concept musicality to the masses.

Produced at O’Neill’s Night Castle Studio in Florida ‘From The Labyrinth’ comes  released on Decca Records – a well established, nay legendary,  name from the early days of recorded music. You can probably even picture the famous label and paper sleeve which held those 7” singles by the likes of The Stones, The Who and Engelbert Humperdink.  Their maxim has always been to release music by “artists that stand out”. TSO certainly fit the bill.

Known for their spectacular and dynamic stage productions, they fill  the American arenas regularly yet never really seem like  catching on in the UK –reviews from their most recent UK shows reported disappointingly attended theatre venues yet at present, they are out in the US playing a major, ie MAJOR 100 date tour. And that says it all about TSO really – simply no holds barred; big, bold and an attitude that if something’s worth doing it’s worth over-doing.

As far as musicians go, TSO has always been a cast of thousands. With as many electric violinists as guitarists and a list of vocalists which runs to the several dozen who’ve can add TSO to their CV, the band really does run like a musical theatre venture – understudies, additions and one offs littering their history. But ultimately, what does this so called ‘hybrid album’ look and sound like? For starters, it’s a record which doesn’t tread the usual path of being built around a complete story. Instead, it’s a collection of completed songs  from which the story will  allegedly emerge “from their combined journeys.”  Maybe regular TSO fans will be drooling at the thought but casual listeners might be lost at his point. Especially when the overall notion is explained as  being about a dialogue between the wisdom of the past and the hopes for the future via correspondence between a child and an old friend of his/her (gender unspecified) grandfather.

However, galloping over the hill to the rescue come fourteen songs, naturally there’s the tendency toward musical theatre but then with their history of working in the field of rock opera, that aspect comes as standard. From the theatricality of ‘Time & Distance (The Dash)’ making its operatic stance clear in the first ten seconds and ‘Madness Of Men’ – a spirited instrumental – there are moments which range from the almost metallic stomp and visually evocative riffing of ‘Mountain Labyrinth’ to less bombastic moments

‘Prince Igor’ will have you running to check out which classic it evokes at the start before evolving into a Wakeman like keyboard instrumental passage.  Elsewhere, ‘The Night Conceives’ is a concession to a standard hard rock number, cut from the same cloth as Zep’s ‘Black Dog’ in terms of its structure and  followed by the contrast of  TSO going acoustic based power ballad on ‘Forget About The Blame (Sun Version)’  –  Lzzy Hale from Halestorm features on an alternative version  ‘Forget About The Blame (Moon Version)’ which appears as a bonus track although unusually has been used as an album teaser.  While the album comes to a close with the clutch of more gentle and understated piano based ballads which includes ‘Past Tomorrow’, ‘Lullaby Night’ and ‘Not The Same’, it’s a shift  aside from what you might expect from TSO and their tendency towards bigger productions. Ultimately thought,  these are the tracks which work best and confirm or at least offer an indication of the appeal and popularity of  TSO  in the US marketplace.

Lyrically dealing with humanity’s journey through the ages, the fall of the Berlin Wall, banking controversies and bullying, you can’t say that the subject matter isn’t varied.  Plus there’s the fact that the album remains true to its promise of being a collection of songs. There’s nothing too lengthy or unnecessarily  extended – which is possibly a shame given the grandeur under which TSO generally operate, yet makes for a more straightforward listening experience and confirmation that  even for a band like TSO, sometimes  less is more.

Listen to TSO performing ‘Forget About The Blame’ from the album, featuring Halestorm’s Lzzy Hale:

You can find the Trans-Siberian Orchestra website at : https://www.trans-siberian.com/