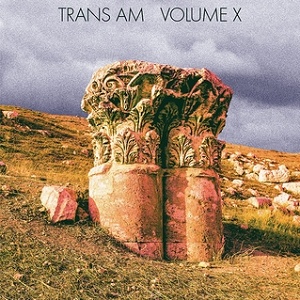 You’d almost be forgiven for thinking that Volume X is a compilation of ten different artists each presenting one track each. Trans Am clearly defy definition and are fresh and entertaining for it.

Formed in Washington DC in 1990 they are known for releasing a string of styles from Krautrock to metal, from synthpop to folk, mainly instrumentals with dance overtones. Their eponymously titled debut album was based around improvised instrumental versions of 70s M.O.R. sounding rock efforts.

From the almost doom metal beginning of opener Anthropocene to the almost OMD like I’ll Never, Trans Am seem happy to follow any style which they feel comfortable with which sees some tracks including the dreaded vocoder (will that thing ever go away?)

As slight, whimsical tracks like I’ll Never fade away, mammoth ones like Megastorm emerge begging to be played at, ironically volume 10 and no doubt in the process rupturing an eardrum or two. Night Shift could almost be Kraftwerk and Backlash is just plain mad, frenzied thrash metal.

The mixed up styles aren’t limited to single tracks either as K Street demonstrates 80s pre-programmed rhythms, uncontrollable guitars and the line “what’s your fucking problem?” all in less than ninety seconds. Wonderful stuff.

The opening riff to Insufficiently Breathless maybe unintentionally steals from John Lennon’s Woman but it’s a wonderful sweeping almost mystical end to a truly enjoyable album. Even the prog-rock style of Night Shift becomes acceptable after a couple of listens, although trimming a minute off the running time wouldn’t have gone amiss.

Like label mates White Hills, their ability to mix and thrash differing styles can only be applauded, and if this is the sort of stuff that Trans Am can put out after a quarter of a century together then let’s look forward to the next twenty-five years.