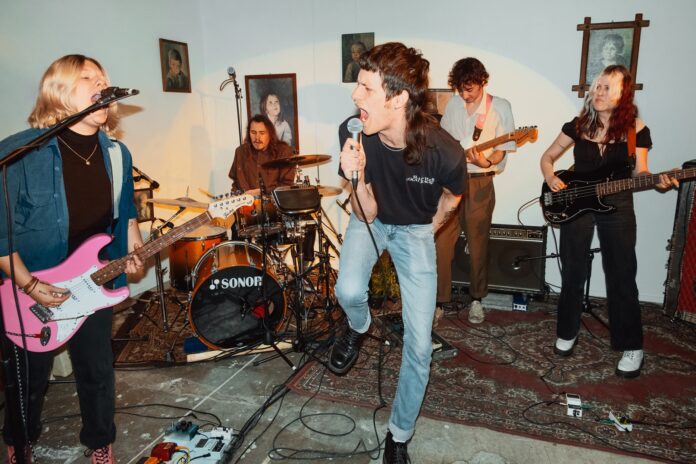 One of Rotterdam’s worst kept secrets is how tremendous a live band Tramhaus is. Revelations have been mostly confined to the live stage – the five piece is adept at burning up venues in western Europe. Their collective message is often channeled through the magnetic stage presence of singer Lukas Pasman.

An unfortunate Dutch musical trait is for bands and critics to over-analyse style and “genre” to the point of no return, in a manner you’d normally see with the way tulips are graded in the bulb industry here. Luckily the Tramhaus crew describe themselves as a “Rotterdam-based post-punk band”, though conversely this doesn’t really capture that much about what makes the band’s sound so interesting. Maybe it’s the balance and tension they are able to capture on this “restrained” debut single. Despite the cut-back nature of the sound there is a pent-up antagonism and impatience that isn’t fully explained, but left to the listener’s imagination. Whatever, the band is adept at keeping things simple. The single’s subject matter is about being cool as a hip and happening Rotterdam arty type, about not committing, or being seen to commit, in case anyone else steals a march. The smiling but cruel bronze mask of modern media.

Some shots in the video are reminiscent  of Captain Beefheart’s Safe as Milk cover which must be deliberate given the background and fish eye lens used… Oh please, let it be deliberate.