Home Music Bands Trainspotting: Twenty Year On At Edinburgh Fringe, Plus An Interview With Irvine... 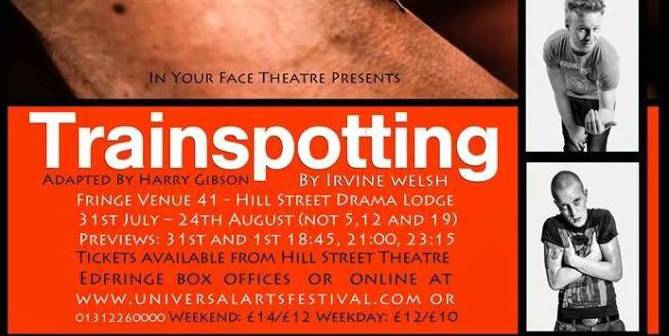 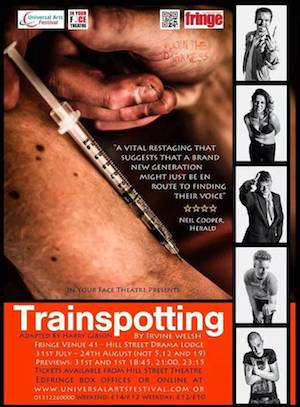 With Trainspotting, the first novel by Irvine Welsh, now being twenty years old, In Your Face Theatre have been running a production of the play based on the book at this season’s Edinburgh festival, billing it as “…the story like you’ve never seen it before.” Harry Mulligan reports back from the play itself where he managed to grab a few words with the great, uncompromising author himself about both the play itself and his current plans.

It was once suggested that if Alan McGee, the Creation Records boss provided the soundtrack to Britpop, then Irvine Welsh wrote the narrative. It’s been twenty years since Irvine gave us Trainspotting, at approximately the same time that Alan offered Noel Gallagher and Oasis a deal at Glasgow’s King Tut venue. The rest is history.

There is a distinct feeling of ‘We’ll meet again, don’t know where, don’t know when’, as a group of us navigate our way down the Royal Mile. We’re heading towards Hill Street, where In Your Face Theatre has produced an interactive production of Irvine’s Trainspotting.

The years feel like they have folded in on themselves. Is it really twenty years? When I asked Irvine what he thought about Trainspotting now, he is brief, succinct and to the point:

‘I don’t like watching or reading old material I’ve done, I’m proud of Trainspotting now, but it was so long ago it feels like somebody else’s work to me.”

Similarly, when asked about the new production of his work being performed at 2014 Edinburgh Fringe, he said:

‘Funny, I just saw it last night! I thought it was a great show. It really breathed new life into the old dog…’

It’s difficult not to laugh, when Irvine Welsh refers to Trainspotting as ‘…the old dog!’ It made me think ‘Wow, what can the book he’s promoting now be like, if Trainspotting’s the ‘old dog?’

Irvine is here in Edinburgh from his adopted home in Florida. He is here to promote a new book and film, to experience the world beating Edinburgh Fringe, and to spend time with close friends and family here on the ‘auld sod.’

‘Breathing new life into the old dog’ conjures up images of a deflated, flat and lifeless carcass, and it’s definitely not that. Add an In Your Face approach to production, and all of a sudden it’s up close and personal. The interactivity between audience and performers see to that. There’s a cast who are much more congruent with the original script than even the film was, there’s excellent use of chiaroscuro, lighting & makeshift sets, a dance troupe caught in the throes of a withdrawal induced seizure – in staccato bursts.

Renton, (played by Gavin Ross), turns to me at one point. He ad-libs, launching into a diatribe, winks at me and blows a kiss while mock drying his hands on my sweater like it was a roll of towel in a train station toilet. Fabulous; – Hollyweird, Eat Your Heart Out!

There is a cornucopia of laugh out loud moments:- Renton waking in the morning having crapped the bed, theatrical shit smeared all around his balls and up his crack and back. Its so authentic, I could almost smell and taste it. I even looked at the woman next to me suspiciously, thinking ‘you need to brush your teeth and have a shower Hen.’

There are sobering moments; Tommy (Greg Esplin) is on the floor, clucking like a chicken from feigned withdrawals, naked as a skeleton in a skin graft. Renton reaches into a back pocket and pulls out the heroin cooker and the smack. There are great sobs emanating from his chest. It’s very evocative and brings up feelings of grief and despair in myself. His friend is suffering horrendous, monumental pain and in a fetal position. At different points in the play, I realize that Trainspotting is as relevant and as timeless today as the day it was written.

When Rentons’ mother (Jessica Innes) addresses his prone body on the floor at the end, she cries out in anguish: ‘I’ve lost one son, I’m not losing another!’, or words to that effect. Then suddenly the cast are giving their Bows, it’s over and we’re leaving. Walking down the stairs to the exit, I’m in a daze. I’m lost in my own reflexive process – thinking about my own mother, and what I put her through when she was alive. Wow ! One of my friends who accompanied me is a recovering addict like myself. He’s cowering, hands on his knees, taking deep breaths behind a van on Hill St.

I turn to leave, reluctantly.

Postscript; I asked Irvine: ‘What are you doing now?’ and ‘ What are your hopes and fears for the future? He responded too wit:

‘I’m working on a new book and movie … My hopes are for Scottish Independence and an extension of democracy in Britain. The only thing I fear is the status quo…’

‘I thought it was a great show. They really breathed new life into the old dog.’

All words by Harry Mulligan. In Your Face Theatre Company can be found online here: inyourfacetheatre.com.