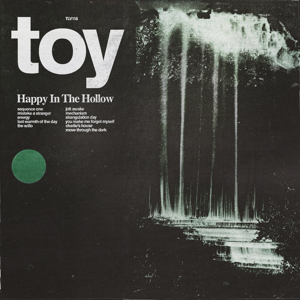 Happy In The Hollow

If someone told you Happy In The Hollow was a recently discovered tape of an obscure British band from 1968, who broke up after a bad acid trip left their singer confined to a mental institution for the rest of his life, you’d probably believe them.

There are times – plenty of times – when TOY sound like a blast from a wistful English past of long hair, loon pants, Red Leb and dodgy ‘taches. And music like this. Then you realise there’s much more to them than that. For all their 1960s retro-psych trappings, TOY also exhibit a strictly 21st century dedication to digital technology: behind the cascading guitars and phased vocals there’s a rumbling undercurrent of machinery, as illustrated by song titles like Mechanism, Energy and Jolt Awake, though they have their pastoral side too.

After three albums ploughing a very similar furrow of relentlessly propulsive krautrock with psychedelic shoegazey trappings, they are finally expanding their horizons and, following the tune-averse grooves of their last effort Clear Shot in 2016, focusing on proper songs, though it takes a while to get there. Opening tune Sequence One throbs and pulses with Tom Dougal’s characteristically listless, disconcertingly fey vocals submerged deep in the mix while Dominic O’Dair’s abrasive guitars slash through the murk created by Max Oscarnold’s burbling keyboards and the metronomic rhythms of drummer Charlie Selvidge and bassist Maxim Barron.

So far, so similar: this is TOY’s first self-produced album and they’ve initially stuck to the sinister sound of the previous three – essentially an impenetrable sludge that cloaks the whole affair in an atmospheric post-punk darkness. But where once there was nothing but unremitting gloom (albeit a very fine gloom), now shafts of sunlight are occasionally permitted to shine through. For example, the unsettling mood of the spooky keyboards underpinning Mistake A Stranger – owing a debt to Delia Derbyshire’s BBC Radiophonic Workshop, and how often can you say that? – contrast with a Beatley acoustic guitar motif that provides a curiously incongruous finale.

Energy does exactly what it says on the tin, its propulsive motorik rhythm a vehicle for another submerged spoken vocal, while Last Warmth of the Day is the musical equivalent of someone opening a window. It wraps you in its warm embrace, its gentle melody underpinned by an insistent bass and military drumbeat before a big chorus that appropriates – rather wonderfully – the gorgeous guitar riff of Urge Overkill’s Girl You’ll Be A Woman Soon from Pulp Fiction.

Album centrepiece The Willo provides a pastoral interlude, spinning off into pastures weird and wonderful, while Jolt Awake continues the sonic experimentation, its synth sounds shuttling from speaker to speaker like some sort of trans-Europe express. Things change again (and change has not exactly been the watchword of TOY’s career so far, aside from their collaboration with Natasha Khan on the Sexwitch project) with Strangulation Day, featuring drum machines and drones and a vocal by bassist Barron that’s a bit Syd Barrett both aurally and lyrically and not necessarily to the record’s advantage: “I live in a box inside your mind” is something the madcap Floydian might have penned following a dose of his favourite drug.

The contrasts continue with You Make Me Forget Myself, offering us slide guitar and gentle rhythms, while Charlie’s House, another acid-folk experiment, finds acoustic guitars intertwining over strange squeaks in the background, a tranquil interlude before the uncompromisingly propulsive finale of Move Through The Dark returns to what TOY have always done best.