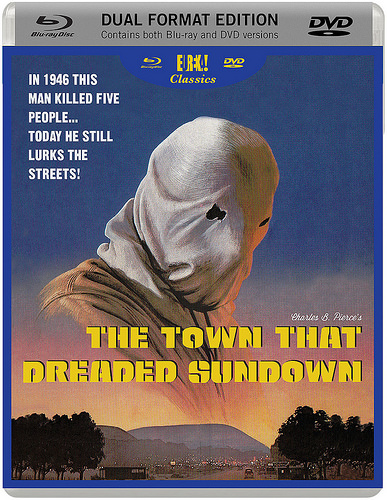 Jamie Havlin reviews a horror movie from the 1970s, claimed by many to have been influential on the slasher subgenre. Is its cult reputation deserved?

Based on a true story and shot in four weeks on a budget of less than $400,000, this movie proved popular with horror fans when paired on a double bill with Quentin Tarantino favourite Rolling Thunder. It also inspired the film of the same name released last year.

Set in the small town of Texarkana on the Texas/Arkansas border in the 1940s, the movie is something of an oddity.

In addition to being presented in a pseudo documentary format, interspersed with a newsreel style narration from Vern Stierman, The Town That Dreaded Sundown also sets itself apart from other slasher movies of the period with some ill-judged attempts at humour usually involving the director himself in the relatively minor role of ‘Spark Plug’ Benson, an inept and foul tempered police patrolman, whose antics could be said to provide some comic relief but in a genre where comic relief is far from necessary – and here the cross dressing decoy scene and madcap car chase only dissipates any tension built up in previous scenes.

The film’s good points, though, far outweigh its flaws and the best thing about it is the actual man who made the town dread sundown, a silent psycho who specialises in attacking young couples late at night, his face always covered in a burlap sack, with holes crudely cut so only fleeting glimpses of his eyes are ever visible.

The first time this maniac strikes, his victims are beaten savagely though both survive. When he strikes a second time, brutally slaying a couple of local youngsters, the local Deputy Norman Ramsey enlists the help of legendary Texas Ranger and criminal investigator, J.D. Morales (Ben Johnson of The Last Picture Show and The Wild Bunch) to help them in the search for the man who becomes known around the country as ‘the Phantom Killer’.

Ben Johnson gives an exceptional performance here and also in the film’s favour are two very tense and memorable scenes, one featuring a girl being chased through a cornfield (before this kind of thing became a slasher cliché); the other involving a very unconventional and disturbing use of a trombone. Yep, a trombone. 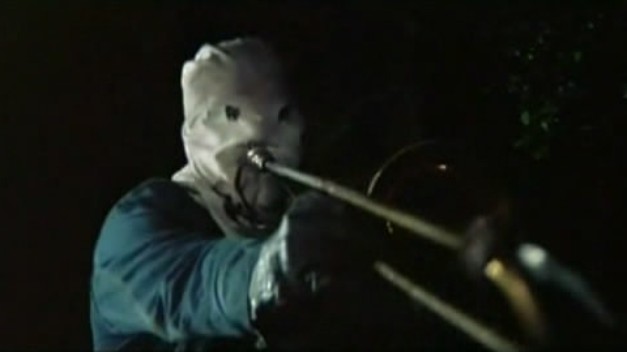 The Town That Dreaded Sundown is a flawed but highly watchable movie that does deserve its cult status and which will undoubtedly enhance the DVD/Blu-ray library of any horror fan.

Extras include trailers for both the film and last year’s meta-remake; interviews with cast and crew members; a feature-length audio commentary which is good on the historical facts of the case and a limited edition collector’s booklet.

For more on the film, visit Eureka’s Masters of Cinema site here.