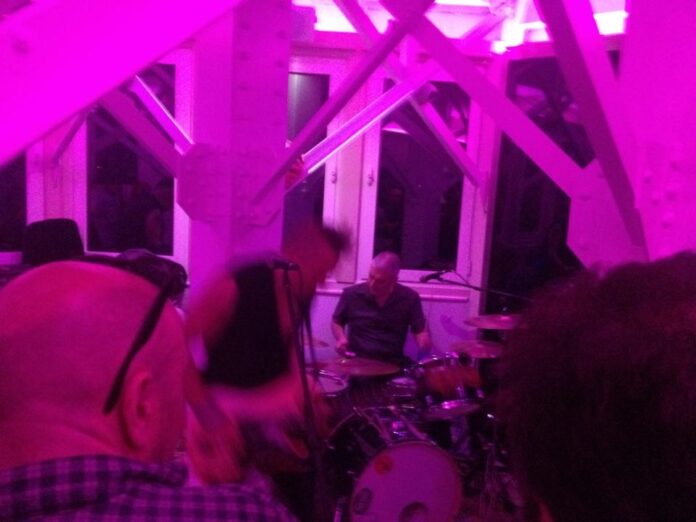 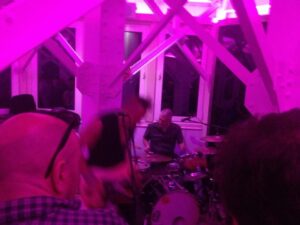 The Membranes are on stage, it’s getting fairly hot, I can feel the sweat pour down my back but thr jagged riffs are driving me insane. I’m zigzagging across the stage electric charged by the music, my bass is pumping dirty raw power and the dislocated dance is going on all around us. I look down through the glass floor to the street 158 metres below. I can see the comedy carpet and piers and the people look like ants as they stagger along the promenade like alcohol charged ants high on booze, adrenaline and the sweet, sinking smell of sex.

It’s the top of Blackpool tower high above the ground where even the seagulls don’t dare and finally the gig is happening. The gig that I’ve pit together with Neil the manager of the local HMV shop which, despite months of planning nearly collapsed at the last minute due to someone at the tower giving us the wrong capacity for the venue. This meant we had to email every single ticket buyer and ask them to come to a newly put on second show if they could so we could split the audience into two- thankfully people go with the flow- and they have come from all over the world to the gig.

With a great bill of bands playing a couple of songs each due to the suddenly thrust upon us tight time schedule, with gig one ending at 10.30 and the second starting at 11, we make it by the skin of our teeth. The bands all do their part by carefully keeping their sets to a minimum to make sure the whole night works- it’s stressful enough having a gig cut into two by the circumstances without any prima dona behaviour.

The Jeckylls are a young, local post punk band and the brief snippet of their music sounds great, Dysphonia are a local punk band who make a good impression, Crackous Rock n Roll played their first gig with the Membranes 31 years ago and have somehow kept their spirt with their Crampsy rock n roll and EVil Blizzard are as mind blowing as ever in a blur of rubber masks and Pil meets Hawkwind freak rock.

The Membranes are now in the middle of the second set, we have kicked the high octane with ‘The Universe Explodes Into a Billion Particles of Pure White’, a poignant Tatty Seaside Town with its lyrics about the frustrations of growing in in Blackpool,fitting perfectly, ‘Do The Supa Nova’, ‘Space Junk’ In The Graveyard’ ‘Spike Milligans Tape Recorder ‘ and ‘Myths and Legends’ resounding around the metallic infrastructure of the top of the tower.

The audience may have been initially reticent about moving on the floor so high up but they have thrown caution to the wind or the breezy ozone and everyone is locked into the pulse of the Membranes dislocated beats and cranked post punk thunder where every song has to be different but somehow links together in the spirit of the band which we formed out of our (mis) understanding of punk rock. This was our version- a homegrown version- we loved heavy dark bass lines and shrapnel guitars, we liked things that were not obvious, we liked stuff that did its own thing but we also liked energy and noise and, despite what some people might think, we liked melody but not the conventional stuff- we liked it distorted, unconventional and breaking the rules. 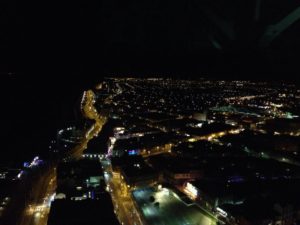 After the gig some people come up and say the night has cured them of vertigo which is perhaps the highest (ha!) compliment of them all.

The worst crime in music is to be boring- run of the mill is a crime and doing the unexpected is pure gold.

I’ve played a lot of gigs in my time- I’ve played in lunatic asylums, old boats, cow sheds, in shops and in fields but I’ve never played at the top of tower. Being a seasider Blackpool tower is part of my DNA, part of my fabric- looming large over me physically and mentally and spiritually- it defined the whole town and you could see it for miles around. Built in 1875 as a seaside attraction version of the newly built Eiffel Tower in Paris it was a classic example of deranged daring do Victorian thinking – those far flung days when everything was possible in the UK and building the big stuff was normal- Blackpool is a great example of Victorian thinking- building a whole town from scratch so people can breath in the ozone blowing in from the dark and foreboding Irish sea, swiftly it became the biggest holiday resort on Europe as stern loking men with wrought
iron Victorian names like Eugenius Birch and John Bickerstaffe drove through their plans to build a holiday town on windswept sand dunes.

The only thing wrong with Blackpool Tower was that is was never built taller than the Eiffel Tower- that would have been funny- the Parisians who, initially hated their new tower, would have had to have had the ignominy of having the second tallest version.

Blackpool Tower is somehow more beautiful than the Eiffel Tower as it defiantly faces the sea and is an iconic presence, not only in Blackpool but in the UK- it was the tallest building in Britain for 80 years and is the perfect place for a gig for a band that was born and bred in the seaside town before leaving for worldwide underground cult noisiness.

The night is intense and insane- a blur of trying to sort out the ticket mess, standing on the door downstairs to make sure everyone gets in, trying to talk people down from their fear of heights and buzzing off running around the top of the tower.

Blackpool looks stunning from this height and when the night comes down it twinkles and glows in the distance like some kind of superior Vegas- I feel a mist of sentimentality for the old place- the place where this strange adventure began all those years ago in 1977 and if it always felt like a disadvantage coming from here, unlike- lets say some of our contemporaries like Sonic Youth coming from New York City, Big Black from Chicago, Einsterzende Neubautaun from Berlin, the Fall and Joy Division from Manchester- romantic places full of filth and stories. We felt trapped by geographical circumstance offering candy floss to their Berlin Wall when we were equals stuck in a seaside town.

Tonight, though, musically, visually and spiritually it kinda felt perfect- despite everything we had pulled off this perfect gig that kind of told the whole story in one go and our music stood up to our fellow travellers and our location had its own fascination that was the equal of New York or Berlin or anywhere…