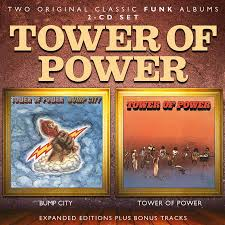 The second and third albums by multi-racial, brassy Bay Area Soul/Funk aggregation the Tower Of Power….Ian Canty asks “What is hip?” and finds out it isn’t him whatever the case…..

The Tower Of Power officially came into being when band founders Emilio Castillo and Stephen Kupka, both saxophonists, were urged to join forces by Emilio’s father, who could see the natural spark the two had. So was formed a long, long working relationship with much success into the bargain too. Though the band (who are still very much in existence and playing live today) would have many line up changes over the years they would always be marked out by their distinctive and large brass section which was called into perk up the works of many other artists over the years. They are probably the only people who recorded with the Monkees, the Grateful Dead and KMFMD (though I will be happy to be proved wrong on this point).

The influence of James Brown and the JBs is evident in the work of the Tower Of Power and for their two most successful albums which are featured here they employed the kind of tough Funk workouts that Brown had pioneered in the late 60s. Added to that they wore their own R n B roots with pride, plus were more than capable of knocking out some smooth floating Jazz/Soul ballads. Put that all together and you had a tempting recipe which paid off well for the T.O.P. in the early 70s.

It was with their second LP “Bump City” that Tower Of Power really came into their own (Rick Stevens replacing Rufus Miller as vocalist for this one, he sported a good James Brown style holler, but even so, he didn’t last long!) and started to see themselves becoming a fixture on the R n B and Billboard charts in the United States. Though there were a host of bands working in a similar field at the time as Funk exploded across the USA, T.O.P. managed to mark out some space of their own there with hot and heavy tracks like “You Got To Funkifize” (though I have no idea what that means) and “You Strike My Main Nerve” competing with slick love songs like the Jazz-inflected “Gone” and “You’re Still A Young Man” (which was their first big hit and also one of their most enduring songs). This one-two punch was leavened by tracks that picked up on their Soul background such as “Skating On Thin Ice” and the more Blues-themed “Flash In The Pan”. To be honest they were not quite the cutting edge of Funk and more in tune with the 60s big band Soul outfits, though reviewing them in 2016, the classification doesn’t seem to matter much.

It worked as a decent enough record in itself but the Tower Of Power would be defined by their next album, the one where all the elements came together, the estimable, self-titled “Tower Of Power”. The revolving door policy went on and Stevens was out, succeeded by the longer serving, smoother-voiced Lenny Williams (who managed to stay on-board for the next three albums). Though sporting the standard “hot dancer followed by slick ballad” track-listing that was the basis for many a Funk/Soul album of the same year, Tower of Power managed to cook up more hits than misses and the ballads at least packed some punch. This LP got to number 15 in the US national charts, contained 3 hit singles and was the home to some of their very best work. Ensuing with the brilliant Proto-Funker “What Is Hip?” (possibly the basis for hipster Perry Haines’ New Romantic cash-in “What’s Funk?”). They even managed to put a little twist of Southern Soul (or even, dare I say it, Country Funk?) on the big hit, the delightfully creamy slowie “So Very Hard To Go”. “Get Yo’ Feet Back On The Ground” provides the bite, classic early 70s Funk, an intense, uptight groove with some wild guitar belying the looping gait of the rhythm. The horn section dominates throughout of course, but one shouldn’t discount the formidable drumming of David Garibaldi (note to self: don’t say “as a drummer, he takes the biscuit”)

Though their best and most successful record, Tower Of Power would remain remarkably resilient and their LPs would usually see good sales, though they tending to be looked at as a bit of a muso outfit as time went on. They were all excellent players obviously, but these two records have a spark and energy about them. Early on, they were more immediate, full-on powerful and fiery, keeping the groove constant, but also able to pull out a top quality Soul lurve song as well. Over these two records may have appeared a little behind the times back then, but they rarely put a foot wrong with their Blues background and Soul chops seeing them through to some thoroughly agreeable sounds.