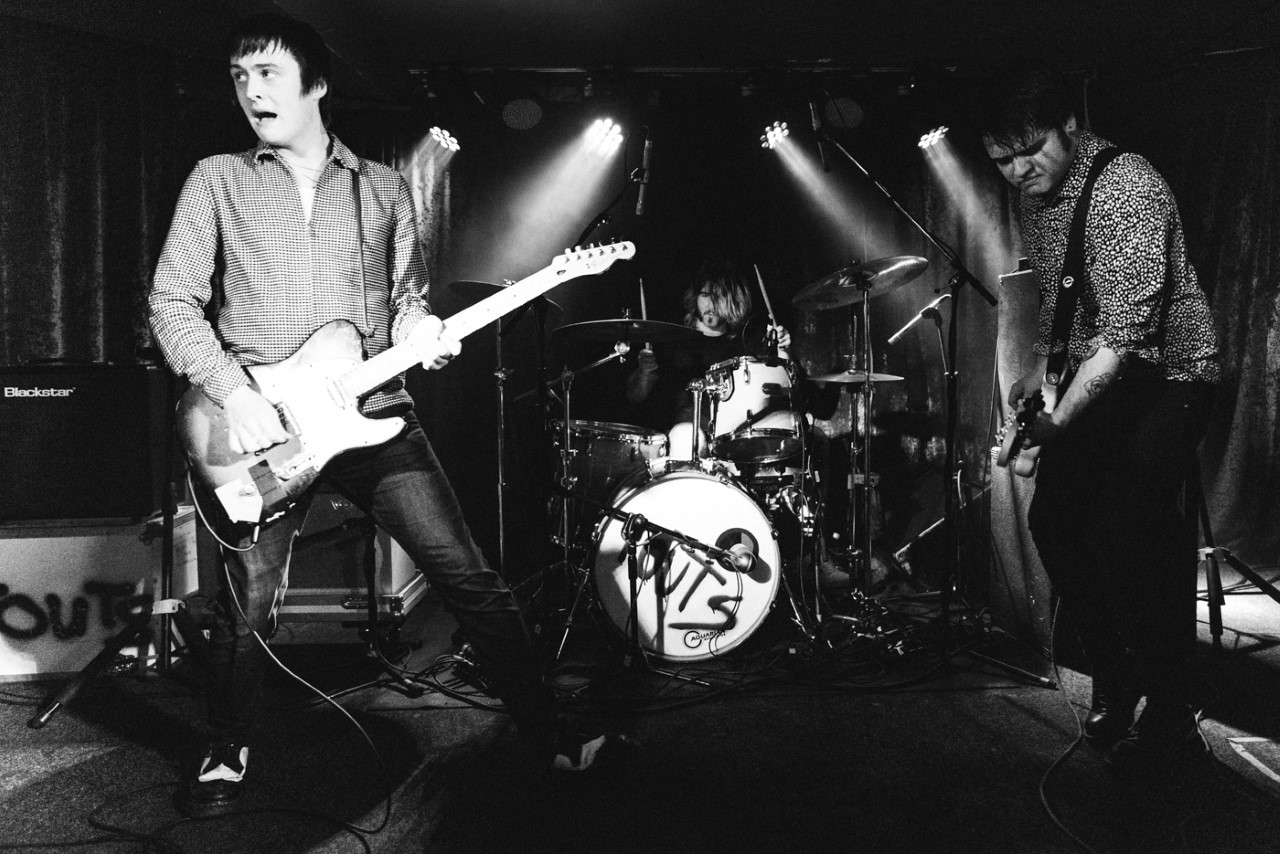 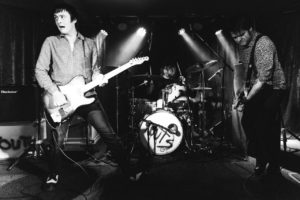 The Guinness is flowing, the tiny Voodoo venue is packed to the rafters and the temperature is rising to boiling point as three teenagers (well, two…) take to the stage to a mighty roar. Immediately all hell breaks loose.

Within seconds, sweat is spraying, pints are flying and a crowd of youngsters barely older than the band themselves are pogoing like it’s 1977.

Touts are the most incendiary young band to come out of Derry since The Undertones more than 40 years earlier, as our own John Robb spotted in his New Band of the Day post exactly two years ago. If you don’t believe John, just ask Paul Weller, who was at their London gig a few days after this one – after getting lost and being directed there by our Keith Goldhanger – and is producing their debut album.

Guitarist and lead vocalist Matthew Crossan, just 18, has more than a touch of the young angry Weller about him in the way he prowls the stage, in the way he slashes his guitar and growls into the microphone, and, until recently, the mod feathercut to match. They look and sound a lot like The Jam in 1977, as well as drawing inspiration from The Clash and channelling more obvious influences from their own backyard.

They may come from the same town as The Undertones but their songs – and the hoarse rasp of Crossan – are more like Belfast’s punk heroes Stiff Little Fingers. Unlike Feargal’s preference for singing about soft subjects such as Subbuteo and the vicissitudes of teenage romance, Touts tackle today’s Troubles – as well as those historical ones – head on in songs like Bombscare, Cease And Resist and Political People.

Then there’s their name. In Northern Ireland, touts are not those dodgy middle-aged geezers who fleece gig-goers by selling concert tickets at rip-off prices. The word has a more sinister meaning there, referring to police informers who grassup  paramilitaries: this young trio chose to reclaim the name for the Alternative Ulster that Jake Burns so famously sang about before they were born.

Not that all Touts’ songs are openly political; others are fuelled as much by the frustrations of school life (Crosan only left last year) as the failures of politicians, paramilitaries and priests. Crowd favourite Go Fuck Yourself speaks for itself, while Chicken Fried Rice speaks for us all in its singalong chorus “Too much shite on the radio,” and Pretentious Revolutionarist – an assault on keyboard warriors spreading their ill-informed prejudices in bedrooms all over the land – succinctly sums up their pointless activities: “It’s all a load of shite”

Onstage there’s not only a shared exuberance but a tension between Crossan and bass player Luke McLaughlin, who takes lead vocals on songs including early single Can’t Blame Me, as well as bellowing out the aforementioned anthemic choruses with aplomb, and seems intent on stealing the limelight as much as he can.

The show’s best moments are when the pair of them come together at the centre of the stage like duellists, their evident camaraderie teetering on the brink of rivalry. It’s no bad thing: it only fuels the energy coming from the stage, and there’s no shortage of that in a set filled with short, sharp songs that generally come in around (and under) the two-minute mark.

Behind them, a newly hirsute Jason Feenan, 19, his long blond hair flailing as he batters his kit into submission, provides far more than a foundation for the frenzy in front of him, his percussive skills providing perhaps the greatest element of invention in their fiery, furious sound.

Together the trio make the perfect combination. I’d like to tell you more about their banter but their accents are so thick that I haven’t got a clue what they were on about most of the time: they even joked about how the Belfast audience would probably struggle to understand them (that much I did get). As the correspondent from Irish site Hot Press put it, they make the cast of Derry Girls sound as if they’re auditioning for Downton Abbey.

Listen out for their latest release, a cover of a ‘lost’ Joe Strummer track from 1984 called Before We Go Forward, which they are putting out – to their credit – to raise money for the Joe Strummer Foundation.

Touts have come a long way since their anthemic debut single Sold Out, with a series of high-profile support slots with Liam Gallagher and Kasabian, Blossoms and Cabbage – and Weller himself – and strong radio support from Zane Lowe, Annie Mac, Steve Lamacq, Daniel P. Carter and Huw Stephens, with the latter inviting the band in for a live session on his Radio 1 show.