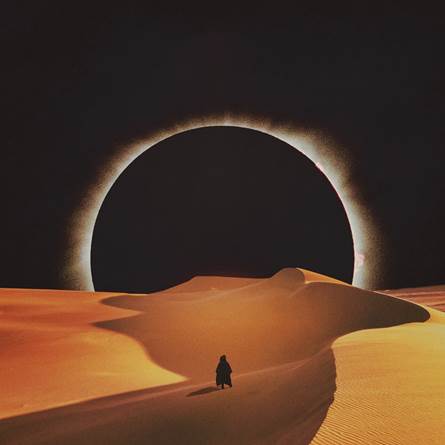 Madrid based rock band Toundra have just hit the milestone of their first decade in existence and celebrate with what must be their strongest work to date in a barrage of post rock gluttony.

Taking a leaf from the Peter Gabriel school of album titles, their fifth album finds them not only conceding finally to an album title following a series of I, II, III and, erm IV, but also in earth shattering, colossus building form. Maybe taking further inspiration from fellow label mates and European post rock outfit Long Distance Calling whose Boundless album saw an impressive return to showing their instrumental prowess, Vortex finds Toundra similarly flexing their muscles.  The challenges of writing and recording and album with no vocals is undertaken with aplomb to produce a work of  magnitude, hugely cinematic with few bouts of respite. It’s also an album where both the album name song titles offer an expectancy – Vortex the perfect description for the contents while Cobra sways and readies to pounce, the element of danger, the edge of the seat anticipation never far away. A track that rides on a shrill and penetrating drill of guitars is matched by the eleven  minute  centrepiece;  the  roaming and dense call of the vast expanse of  Mojave offers a strange sense of the absurd with the typewriter clacking that pervade its opening passage. An arrangement that shifts and sways while maintaining an established penchant for high intensity from which there’s little respite.

The gold star for best riff is reserved for the central core of Tuareg that unleashes an almighty stomping passage that’s just missing the kitchen sink or alternatively some sweeping strings – it’s the Toundra ‘Kashmir’ moment, to which the response is a brief and atmospheric, dream-like Cartavio; typical of the moments of restraint that dot the flow of the album. Roay Neary is similar; the sort of almost throwaway little diversion that the seventies Prog giants used to throw in to break up or add a little relief from the intensity of longform compositions (Genesis’ For Absent Friends or Harlequin and ELP’s Benny The Bouncer spring to mind).

Final track, Cruce Oeste track offers a touch of both faces of Toundra: brooding and threatening yet not quite spilling over, remaining in control with a sense of ‘will they won’t they?’ melodrama, it completes a voyage of discovery in an enthralling album. Never heard of what the Spanish have to offer in terms of cutting edge rock before? Sit back, relax and turn it up loud.

Watch the video for Kingston Falls from the album:

Toundra have several UK dates as part of a European tour: