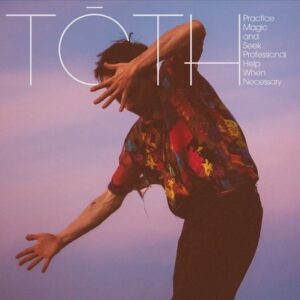 Louder Than War’s Ioan Humphreys gets blown away by the graceful and fragile vocals of Tōth’s latest single.

In July 2016, Alex Toth was recovering from a broken foot and a broken heart, stuck in his fourth-floor apartment in Brooklyn with cast and crutches. This is where Tōth’s debut album, Practice Magic And Seek Professional Help When Necessary was born. A few months earlier, Alex and his Rubblebucket co-founder and love of more than eleven years had “consciously uncoupled,” after a period of helping each other through devastating challenges — ovarian cancer and alcoholism, depression and crippling anxiety. It was a separation rooted in profound respect, marked by matching stick-and-poke tattoos, and followed by a continuing, fruitful creative partnership. In the wake of the breakup, Alex started writing and recording what would be Practice Magic and Seek Professional Help When Necessary. The album is a self-described self-help guide unlike any other — a breakup album before wholeness, but after anger. This makes absolute sense.

The second single to be released from the album is Picture of You. A gentle trumpet intro starts this achingly sensitive track. The beginning of the video sees the message “This is a metaphor for grief and acceptance” come up and this speaks volumes for what is to come. The instrumentation is approached with a tenderness and stripped-back feel with the bass, guitar and drums playing second fiddle to the unbelievably affecting vocals. Tōth has probably THE most understated and impressive vocal range of any artist I’ve come across of late.

Combined with the gorgeous trumpet interludes and gentle instrumentation, the overall effect is one of joy, acceptance and a blissful experience that comes when you feel like you’ve somehow connected with Tōth. And surely this is what music should be about?

Having listened to snippets of the album, I can confirm that Picture of You is not a one-off either.  The whole album has a genuinely ‘feel good’ feel to it simply because of the vocals by Tōth which are measured and dignified. There may be some serious issues addressed across the LP, but there is an overwhelming feeling of optimism running throughout Tōth‘s work. He is an incredible talent that needs to be heard now.