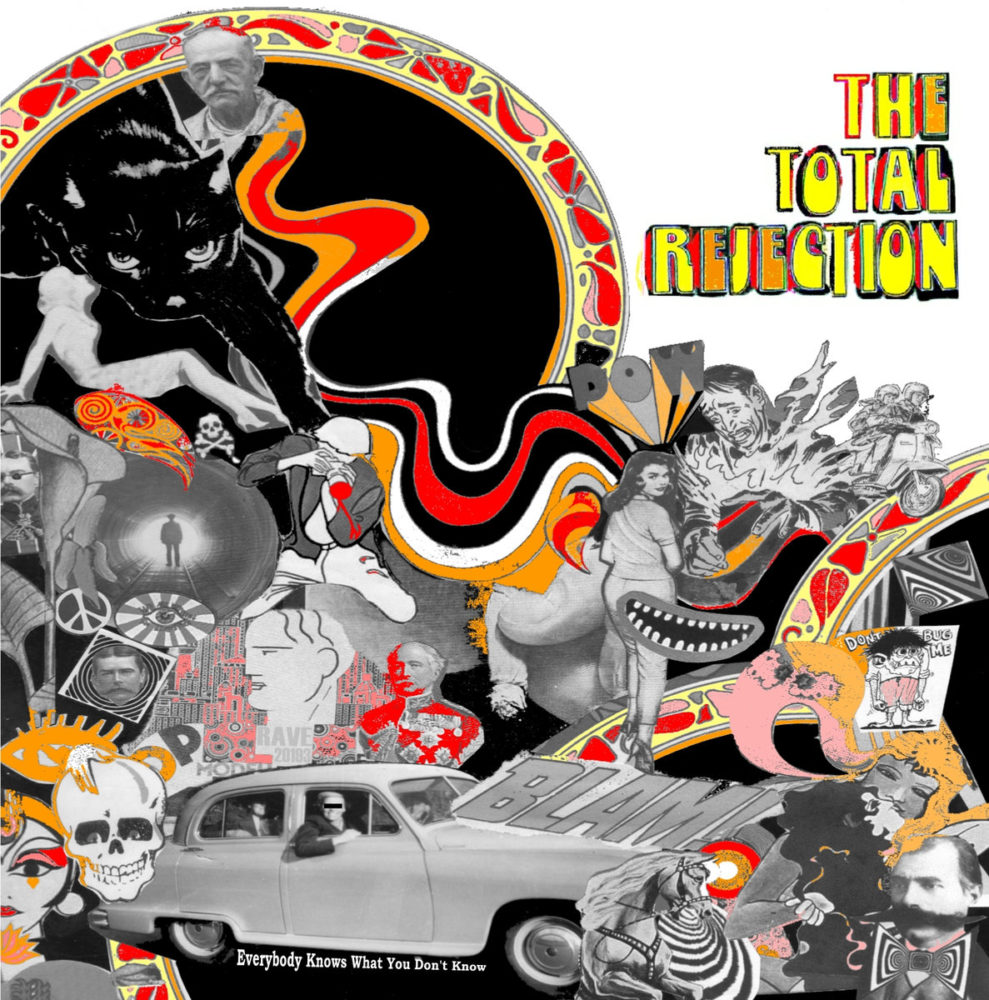 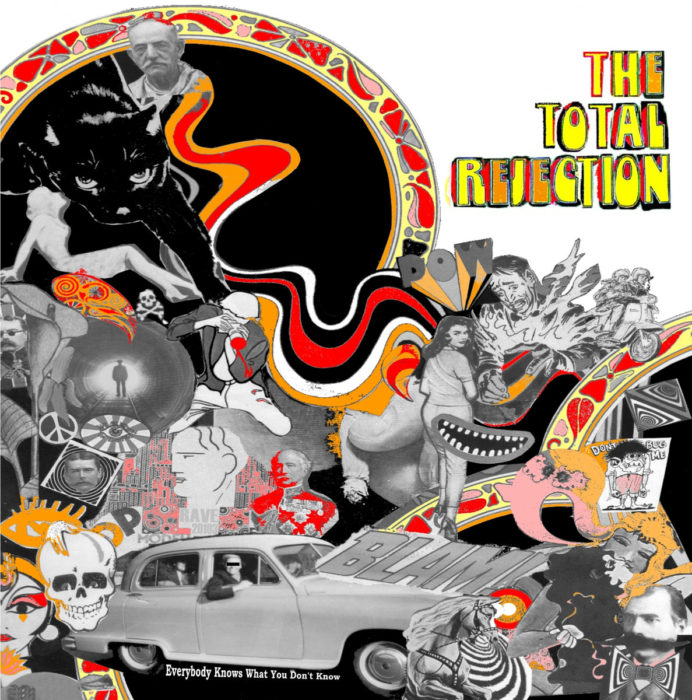 The Total Rejection: Everybody Knows What You Don’t Know (Raving Pop Blast)

Out now /available for pre-order

We introduced you to Arthur Andrew Jarrett and friends in April – an inspirational, irascible West Country Garage-Punk Outsider hero who turns rejection into musical triumph with his band of groovy fuckers.  An album against which all Psychedelic Garage Punk albums should be measured says Ged Babey. Groovy As Fuck, he adds…

This is Ancient and Modern.   Retro-sounds for Future-daze.  Vintage aesthetics for the Outsiders of Today….just feast your glazzies on the cover-Pop-Art. If that doesn’t gives you all the clues you need, then nothing will.

Glenn Airey, a mutual friend of the band and I, on Facebook, described the album as “Highly recommended for the mod in your life who’s started taking acid and growing their hair out a bit and dancing kind of weird.” Which is a fine description indeed.  I imagine a spiritual bonding of the Televison Personalities and Billy Childish whilst tripping their nuts off and after several days listening to Nuggets, Pebbles and bam-bam, into the studio they go….

There is such a fresh, energetic, positive vibe of one-take, who-gives-a-fuckery about The Total Rejection, which belies the fact that basically they are rewriting, re-making and adapting all their favourite old psych records and songs to amuse themselves and to anaesthetise themselves from the slog and drudgery of real-life.

The Total Rejection are the band who will make you smile – and dance -whilst you appreciate their whole aesthetic:  Playing their songs with heart and soul, with fire and passion. /  No dressing up! No pretending it’s 1966. This is the sound of NOW! This is the sound of laughter! The sound of memories! /Raw, colourful and trem-splattered rock n roll…. (their own words).  Which doesn’t  mean to say they have no depth…. their very name is a abbreviated manifesto in itself. They are The Total Rejection of the government, the Way Things Are, the media, the Business, Giving Up, Getting Old… and the Total Acceptance of that they can make records as cool as the ones they listened to as teenagers and sell enough by social-mediated word-of-mouth to break even without any businessmen,  squares and bullshit.

The most critically-acclaimed and worthy music is often the most dour, melancholy and painful … Music can be a way of ‘exorcising your demons’. All the rage and pain and negativity artistically thrust into the world for your listening pleasure: New Dawn Fades,  Frankie Teardrop, Hurt – are all monumental pieces of art.  But man, they can bring you down.  Sometimes you need music which is just a pure joy to listen to.  Music That Makes You Smile! The Total Rejection bring you joy and are the smile division.

The guitar-solo in Bridget (Song For Billy Childish) always makes me laugh or at least smile. It is one note played a couple dozen times in a slipshod, haphazard fashion. Yet it is fits perfectly and is awe-inspiring. Imperfect wild and funny. It sounds like Pete Shelley trying to play like Ted Nugent during the Spiral Scratch sessions

There is a couplet in Circles in The Sky which goes If you don’t want the world to see your failings / You better not leave your head between the railings which also brings a smile to my face every time.

In Shook Up the action is set in a club and a bruiser threatens to rearrange our hero’s teeth because ‘All night long you’ve  been staring at me.   His defence, sung between rhythmic undulations : I wasn’t staring –  I’m just very short sighted.  Followed by a wah-wah explosion of a guitar solo.

I love the way that ‘dirtythoughts‘ is sung as if it is just one word in ‘Slip It To Me’. From henceforth it should be included in the dictionary that way … defined as ‘lust which arises at inopportune moments’.

Entitling a song ‘Maureen, Maureen, Maureen’ is a genius move – the name being totally redolent of the Sixties and beehived, mascara’d girls from the time – she’d be 85 now of course -but still a glamourpuss (like my late Auntie Maureen).

Take A Step Outside is an epic full-on Spacemen 3 type trip-out.  There are  songs which are new but familiar, a sound that is classic yet fresh, the Kinks, the Who and the Seeds have riffs stolen, welded and  re-sprayed and a new set of plates put on them but after a few listens overall it is unmistakably the sound of the Total Rejection and their mood-altering sound-world.

Whilst I really liked the bands previous album -the wonderfully entitled Wrapping Yourself In Silver Foil Won’t Save You From The Blast, it wasn’t quite as fully-formed and unrestrained and joyous as this album on which the band have really hit their stride and made a work of absolute pop-art.

Destined to be a ‘favourite album of the year’,  along with the Magical Record of Blue Orchids and forthcoming Fallen Leaves Live album.