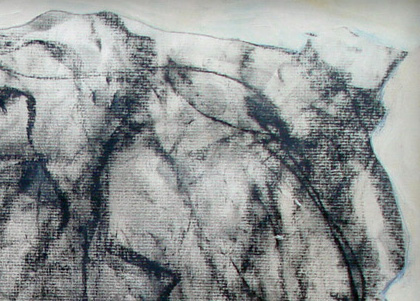 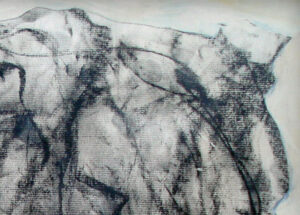 Another review which has been lost in the ether so provided to you late but with brilliance from Barry Lanigan as usual.

Since my last visit to this venue it has recently become West Germany/North Europe. I’m not sure if a transition is in place, but either way one name is as obvious and meaningless as the other. We are in Northern Europe and in the former West Germany, now all happily united as one. Kind of.

This venue is always a safe bet for something interesting and innovative going on and tonight it hosts two acts straight out of New York City, USA: Torn Hawk preceded by Jahiliyya Fields, neither of whom I had heard of before today.

Punters can choose to pay between €8/€10 for entry – a fair offer. I choose the latter so it’s a 50/50 split between each act. Back in Ireland the same rules apply, but it’s worded slightly differently – ‘waged/unwaged’. One of the few times in life you’ll lie about being unemployed.

I come in just as Jahiliyya Fields is starting his set and am immediately drawn to the front. Fields, if it’s not his surname it is now, cuts a priest-like figure behind a desk laden with hardware and electric wiring. Half Puerto Rican, half Irish, dressed darkly with a Manchu queue hanging over his shoulder, he’s extracting and injecting grating electronic sounds from the desk with what initially looks like a giant hypodermic needle. It’s not. It’s a piece of grass, wired to a contact mike and and he’s playing it with a child-size violin bow.

Everyone in the audience is intrigued and it’s hard not to be. He’s producing trouncing repetitive beats, bleeps, zoobs and atmospherics with the concentration of a cup engraver while obviously enjoying what he’s creating. There are some mind altering vocals as he sings into what looks like a flipped open smart phone all hooked up.

It’s very danceable, organised chaos and it has a lot of the audience pre-23.00 hours, which is tea time in Berlin, in the mood for a long night. If you’re getting tired of trainspotting and watching overpaid double act DJ’s grinning across at one another from their Macs, go and see Jahiliyya Fields at work. He’s a genuine talent to behold.

I delved into the music of Torn Hawk before heading to the gig and immediately loved it. So within the space of three hours I was already looking forward to the gig with some familiar songs in mind. Torn Hawk is the alias of Brooklyn based visual artist Luke Wyatt. Wyatt has produced self-described ‘video mulch’ for artists such as Mi Ami, Autre ne Veut and Steve Summers.

He’s an instrumental one man show, backed by rolling collage visuals that cross between snips of teasing nudity, pornography, horror and the bizarre. He plays an electric guitar with some effects and a drum machine with samples. The beats range from early industrial to Madchester grooves to pumping dirty arsed disco with beautiful lush guitar riffs and solos that ascend and descend into one another.

Always erratic and always contrasting. It’s a joy to watch live and a nightmare to describe. Again, probably best to see for yourselves.

You can get details on all of Torn Hawks’ release here.