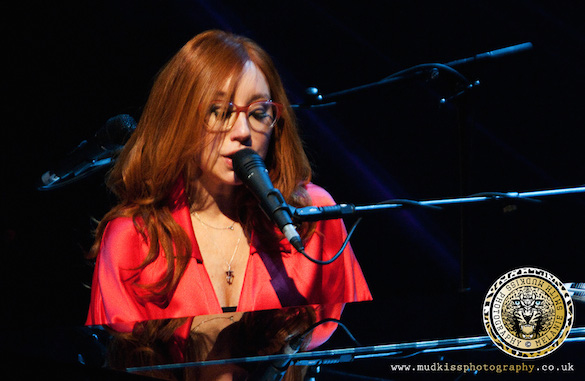 A grand affair…Tori Amos brings her uniquely brave yet vulnerable qualities to Manchester. Mary O’Meara marvels at the special talent.

Tori Amos needs no props, no special effects, no costume changes to blow your mind – no, it’s just one woman and a few different keyboards against a non-distracting backdrop that tells you you’ve landed in the Lizard Lounge.  There are crowds of devoted fans here in the Apollo tonight and just before the legend herself takes to the stage I hear somebody gasp in absolute awe, “There she is!” as Tori appears, a striking, (if small) figure draped in a scarlet satin outfit, elegant, sexy and ready to serenade our souls with the aid of that imposing grand piano as well as an electric keyboard and even an organ when required.

From the moment she opens her mouth and that voice (which she uses as an instrument as deftly as she choreographs those keys) – as soon as the first breath is taken and she begins to sing I’m entranced and it feels as though the entire audience are in the palms of her swiftly moving hands.

The first song tonight is Parasol – each word, each phrase is etched with so much emotion that it’s as if there’s some kind of collective heart opening happening and we are suddenly given permission to feel. This happens over and over throughout the performance. With all these sensitively charged songs – Pancake, Taxi Ride, not to mention a powerful rendition of Silent All these Years,  Amos opens up a space for vulnerability to be an acceptable emotional state – which, of course, it is – but there aren’t many places where most of us feel safe to allow this. For her ability to create this space, I applaud her. It’s not just music to entertain us, it’s truly liberating, highly courageous and deeply touching. The other thing that makes Tori so appealing is it’s not ALL angst and passion. We get frequent soft, subtle touches and an attractive sense of humour and ability to improvise at the drop of a hat. Yep, she’s got it all and it’s easy to see why she’s got such a faithful following and enduring career.

I know that at other times, Tori has toured with a full band but having never seen that show I don’t have any comparisons to make in terms of the effect of the entire concert being just herself and her piano(s).  What I would say, is that the stripped down set-up possibly accentuated the beauty of her voice and the slightly sparse stage (although I’m not sure a stage can be really be sparse with a Bosendorfer piano standing on it) keeps things focused, pure and real. There’s nowhere to hide and no reason to hide. That is the general, freed-up feeling of the entire performance.

Did I mention that Tori can play two pianos at once? – one hand behind her back on the grand and the other on the other keyboard or vice versa….no clumsiness, no beat ever skipped – as though the two hemispheres of her brain are waltzing together in absolute sympathy and poise. I loved Northern Lad – where her voice literally rushes  like a golden shower of raindrops down your spine, “You’re only wet because of all the rain”, and what a mean, moody kick-ass cover of Moby’s Extreme Ways she performed as a request from somebody, saying she’d never played it before. Wow! She batters that piano like the a raging wind against a cliff, and they stand together in rain or shine, knowing each other intimately – they are bonded for life, Tori and her piano. It’s obvious.

Although she has a new album, Unrepentant Geraldines, out this month, typically Tori chooses to be non-typical and plays nothing from it (as far as I noticed) but with a back catalogue as enormous as hers there’s never enough room to display all her jewels. I’ll remember this night. It was special and reminded me that the human spirit has strength and beauty even in its fragility.

Tori Amos’s website is here: toriamos.com She can also be found on Facebook and she tweets as @therealtoriamos.