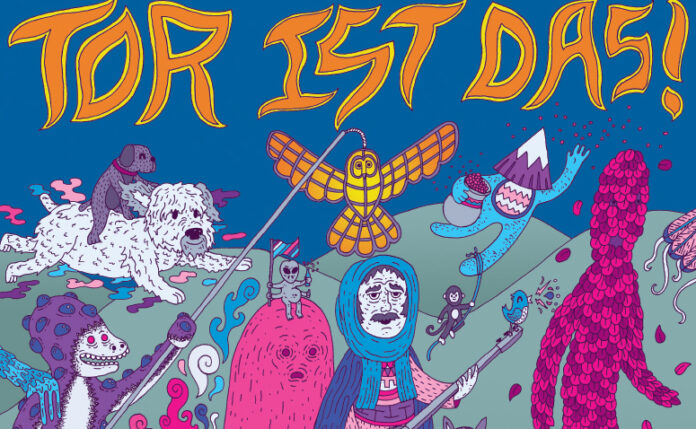 Based just 17 miles due(ish) east of Manchester, the town of Todmorden – one stop on the train away from Hebden Bridge and with a similar bohemian, avant-garde reputation – is set to be blown a new one on the weekend of 14 – 16th August 2015 by TOR IST DAS! music festival, which has the laudable intent to bring psychedelia, experimental, drone, metal and noise musics to the gentle folk dwelling in this W Yorkshire market town – and those of us prepared to travel to it.

Check out how some of the bands sound via the embedded widget above, and look at lineup details in the poster directly below, underneath which is some spiel from the festival organisers, “…a songwriter from Stoke, an illustrator / drone musician from The Hope Valley and a website editor from Huddersfield”.

Tickets are only £20 for the whole weekend or £12 per day. Find them at their website: wasistdas.co.uk/toristdas. 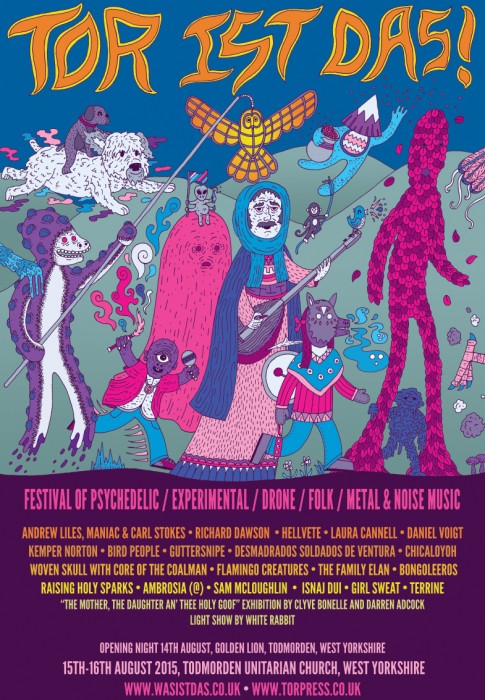 What do you get when you take a songwriter from Stoke, an illustrator/drone musician from The Hope Valley and a website editor from Huddersfield and ask them to make a festival together? You end up with Tor Ist Das!, a 3 day festival in the scenic market town of Todmorden in West Yorkshire, 17 miles from Manchester.

Todmorden in German means “death murder” so its apt that a trio making their world debut at the festival features Andrew Liles of Nurse With Wound, Maniac of Mayhem and Carl Stokes of Cancer. Also bringing the noise are crypto-punk terrorists, Guttersnipe and Manchester noise rock orchestra Desmadrados Soldados De Ventura. We’ve got two different one-person noise assaults from Stockton’s relentless psychedelic noise tornado Girl Sweat and France’s no-wave riot Terrine. We also have the extraordinary music of Flamingo Creatures who take improvised sound and imbue it with the spirit of joyful anarchy.

However, you can’t stereotype the festival as metal and noise rock. Hellvete from Belgium (and a member of Sylvester Anfang II) plays drone minimalism using instruments and effect pedals. European new synth guru Daniel Voight (aka Hering Und Seine Sieben Sachen) will be working his ethereal magic and Isnaj Dui (Katie English of The Owl Service and The Sly and Unseen) with her beautiful blend of laptop and classical instruments. French artist Chicaloyoh will be performing her breathless haunting music. Ambrosia(@) are an electronic duo who blend beats, noise, field recordings and experimental sounds.

We also have some of the leading artists redefining the boundaries of folk music on the bill. We are thrilled to have Newcastle’s favourite troubadour, the one and only Richard Dawson, Vienna’s Bird People and virtuoso violinist Laura Cannell. We have musical instrument inventor Sam McCloughlin of Samandtheplants and N.Racker who has recorded for Twisted Nerve and Folklore Tapes. Irish-based band Woven Skull play hypnotic drone folk with a strong Eastern influence and are playing a set with American composer Core Of The Coalman. Kemper Norton constructs a futurist vision of English folk traditions. Not to mention workshops, DJ sets and craft beer. It’s two full days of live music in the landmark Todmorden Unitarian Chruch, a grade 1 listed building from 1865 in the gothic revival style.

There’s also a Friday night warm up gig with Stoke party mentalists The Bongoleeros and Bradford explorers of Eastern European musical traditions The Family Elan at the nearby Golden Lion Hotel. This will be topped up by a minimal wave DJ set from Rough Fields.

The Golden Lion Hotel, nearest pub to the main venue, is also hosting our two after parties on Saturday and Sunday. The Saturday night afterparty involves valley legends Duende and White Rabbit teaming up to explore the dark side of electronic music and change the function room of the Golden Lion into something very strange. Sunday night will see Was Ist Das? Soundsystem playing cutting edge underground music with classic rock.

A reminder, tickets are only £20 for the whole weekend or £12 per day. Find them at their website: wasistdas.co.uk/toristdas.