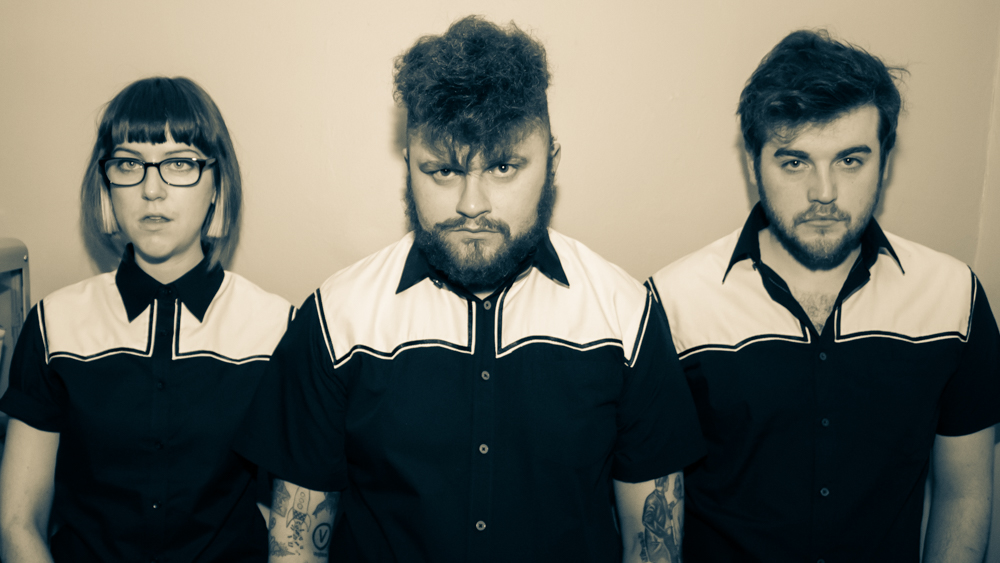 In the current issue of Louder Than War magazine (March 2016) our editor Sarah Lay explores the York music scene and introduces some of the bands from the city that you need to hear right now.

Amongst them was The Franceens. Dan and Naomi from the band also run Behind the White Door, a DIY night in the city, so we got Dan to give us his top ten York bands.

Sorry everyone, but I have to put my own band first. This is serious. It’s going in a magazine and everything. I do genuinely love my own band too. I wouldn’t be in it if I didn’t. We play blistering rock and roll trash. Our live shows are dynamic and out of control. We play a lot of gigs and I can’t think of any other band that I would rather be in.
FFO – The Monsters, The Hives, Rocket From The Crypt.

Back after a recent hiatus, this ear-shattering York trio are one of the best bands on the local scene at the moment. They are also very high in demand, as they play very regularly around York. They are also now starting to head out into parts unknown (places outside our York walls!) Their music is ferocious hardcore punk, with a gritty garage undertone.
FFO – New Bomb Turks, The Offspring, Amen.

A talented young group who are pretty new to the York scene. They play a really unusual mix of power rock and blues/rock type stuff. The songs they have are crisp and fresh-sounding. I honestly think they’ve stumbled onto a sound that is new and all their own. They had drummer problems a while ago, but now they are sorted and a real pleasure to watch.
FFO – Led Zepplin, Rolling Stones, The Jimmy Hendrix Experience.

A wonderful noisy ensemble of some of York’s longest-serving musicians. Their chosen music is dronerock. Moody and a pure sonic wall of effect-washed noise, each time I see this band, their emphatic displays of musical prowess completely blow me away. It’s 5 dudes all working in perfect harmony and that are all totally on the same page.
FFO – Velvet Underground, Can, Spacemen 3.

In the same vien as Soma Crew, but much much darker. John Tuffen and his dark forces have been known to completely terrify audiences in York, with his disturbing take on krautrock/post-punk. They are also one of the loudest bands I have ever heard. John is an absolute audiophile and his band is evidence of his love for multi-layered noise planning.
FFO – Faust, Joy Division, Boards Of Canada.

I have recently joined this band on drums, which is a massive honor for me, as they’ve been playing since 1999. They were the first band I ever saw as a young musical nipper and to be in them now feels like i’ve really achieved something. The music is ass-shaking surf rock mixed with raw proto-punk. It basically sounds like my record collection. It’s some of the best music I have ever put drums to and it makes a very satisfying side project when i’m not Franceening.
FFO – Status Quo, The Beach Boys, The Preachers.

Noisy grungy garage rock. Really well executed and full of mindless fuzz assaults. Right up my street and very inspiring to watch. Elliot is an absolute lunatic on stage and frequntly finishes gigs with bloodied fingers or some other type of injury. It’s punk, but not as we know it. I expect big things for these guys in the future.
FFO – Television, Nirvana, Fugazi.

Two young dudes with appetites for destruction. Their tunes are twisted, shattered blasts of two or three minute noise-romps. Just a guitarist and drummer who both take vocal duties, this is a band born out of love for live music. Their live sets are stunning, both in a musical and a performance perspective. They are another York band that are firmly on the rise.
FFO – Pulled Apart By Horses, Heck, Wet Nuns.

An unusual cross of post-punk and garage, that has a distinct laid back feel to it’s sound. Seeing them live is always a treat, as their songs become more and more familiar and well-drilled. Even some new songs that they come up with feel familiar on first hearing. That takes some skill and shows that this band truly know what their sound is.
FFO – Weezer, Minutemen, Pixies.

Sam is better known for his exploits with Nine Black Alps, but his solo work has recently gained my attention. I had him play a show and it was just him and a drummer (he tells me a bass player is on the way). His music is simple, easy-going and somewhat melancholic, but it manages to charm those who hear it. Never before have I seen a whole Behind The White Door audience in complete slience, listening intently. But Sam managed to make that happen. Simplistic songs from a highly skilled songwriter.
FFO – Smashing Pumpkins, Radiohead, Silverchair.

You can find out about Behind the White Door here.

Louder Than War issue three is available now from WHSmith, independent newsagents or to order online.