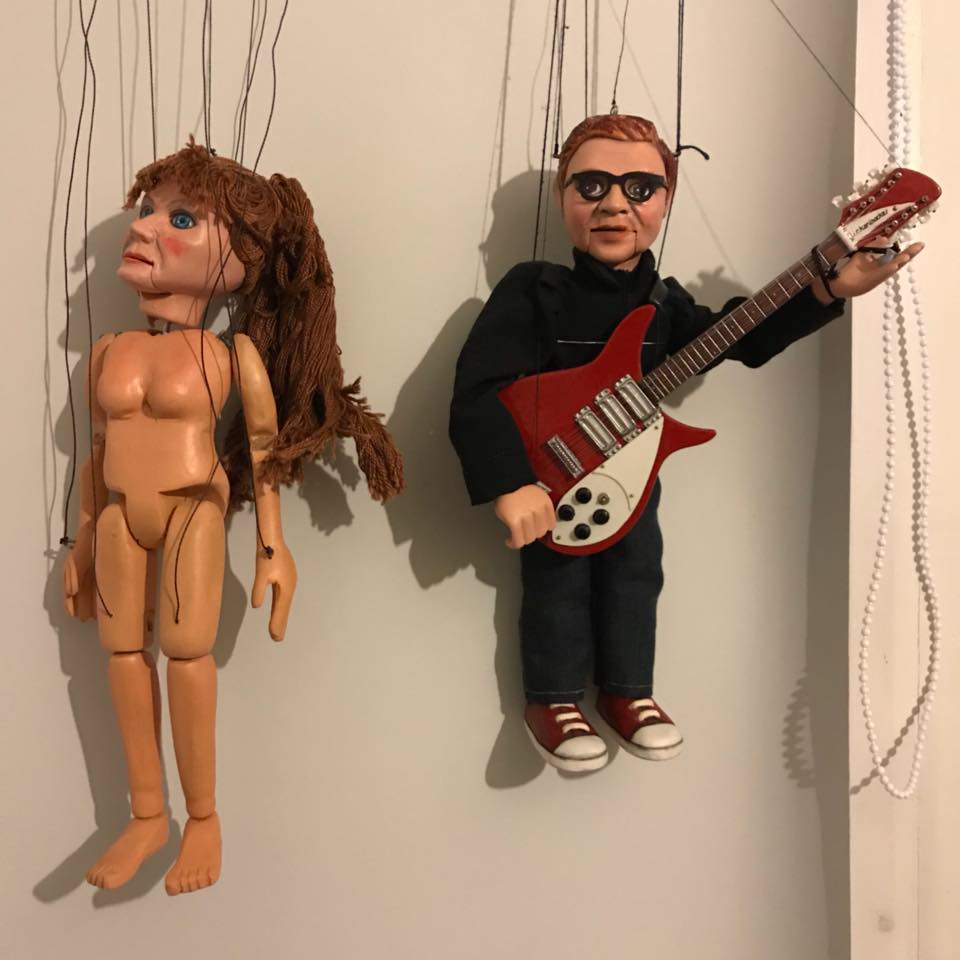 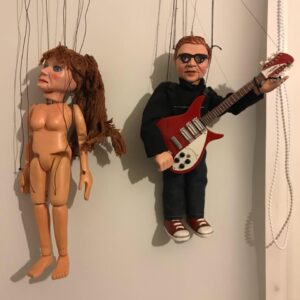 Flux Capacitors -the Bristol surf-punk, blues/ poetry, vegan rock’n’roll band have got some gigs lined-up with heroes of theirs Half Man Half Biscuit – who in turn are admirers of Flux Capacitors.

So to celebrate the fact and shout it from the proverbial rooftops of this here website, I asked the band for a Top Ten.  Seeing as both they and HMHB are both “lyrics-focused” bands, Top  Ten Favourite Song Lyrics…was  decided upon as the subject…. and their choices are cool, idiosyncratic and heavily favour the Biscuit.

Courtney is a wonder. I enjoy so much how she can write about very mundane and normal things in such a tender and mournful manner, and Depreston is her magnum opus. It’s subtly political in that she’s essentially complaining about high living costs, but she does so in such a way that is personal and vulnerable, which in many ways makes the issues even more accessible and engaging. She very neatly and effortlessly touches on the disconnect between classes – the estate agent telling her “if you’ve got a spare half million, you could knock it down and start rebuilding”, as if… I saw her play this at the o2 last summer & it was the crowd favourite for sure – everyone sang along because they all had one thing in common: no one there could hope to afford a house.

The way she can sum up so much just with one line; “Put on a shirt that his mother made and he went on the air”

3.   When The Evening Sun Goes Down – Half Man Half Biscuit
Chosen by Michael McNeil.

Makes the list on the sheer audacity of “I’m off to see the Bootleg Beatles as the bootleg Mark Chapman”. This is my go-to song if I’m introducing someone to HMHB. It’s their quintessential track – Nigel in his zone teeing off about what ires him, the band providing a jaunty yet driving, powerful tune, and utterly dark topics explored through impossibly sharp wordplay & superb turns of phrase. We as a nation do not deserve this group in our lives.

“I said to Hank Williams, how lonely does it get? Hank Williams hasn’t answered yet But I hear him coughing all night long Oh, a hundred floors above me in the Tower of Song” – No words to even pass comment on this one .except I’m Not Worthy. None of us are

It’s awfully easy to succumb to feelings of hopelessness in the face of things like an increasing wealth divide, rampant slum landlords, rising discrimination in the UK… BUT it’s also completely crucial to know these things can be stopped (easily) when resisted. Thankfully we have a ton of empowering union anthems to remind us of that, and remind us exactly what we can do when organised. Solidarity Forever is my favourite union song – it’s mighty simple & mighty inspiring. Singing about class solidarity is nowhere near as cool as demonstrating it though. My union of choice is ACORN, but if you’re not fortunate enough to live in an ACORN city then The Wobblies will do, get signed up. In Bristol a few weeks ago a young guy was threatened with a revenge eviction and bodily mutilation by his landlord. A group of ACORN members stopped what they were doing at a moment’s notice and put their bodies in the way of these threats of violence. This practical class solidarity saw the landlord take one look and run, and the lad kept his home – albeit in awful disrepair. The only way conditions will improve for tenants, workers, and the non-ruling classes is through organisation, direct action, and shoe leather. Listen to Pete & Peggy Seeger, then sign up to ACORN immediately!

6.   Terminus – Half Man Half Biscuit
Chosen by Michael McNeil.

Terminus is deeply sorrowful and completely stunning, and comes as an utter sucker punch to those who think HMHB just do jokes.

Only Nigel Blackwell could turn in his masterpiece 34 years into what he might fight shy of calling a career. It explores themes of loneliness, ageing, grief etc, all illustrated through a simply story following a protagonist we all recognise – the old man who sits at the front of the bus.

The opening lines describe an active and challenging hill climb (a common theme in Biscs lore) as a fond memory from the man’s past, before suddenly and shockingly taking a turn into the poignant and profound: “then time creeps up unseen, and it’s put me back at the front of the bus, hands I once held no longer there // grey falls on the green as I try & get used to me and not us, where I’m going I’m not sure that I care…”

Fucking hell. The subtlety of “grey falls on the green” passed me by the first few listens but once I realised its significance it hit like a train (bus?). Likewise in verse two (which explores attempting and failing to maintain an active and sociable life under the shadow of grief) the imagery of “Inter’s end on derby day” when describing an injured shin is truly remarkable. The salient point being there are doors in the protagonists life which have closed and won’t be opening again – It’s utterly hopeless and depressive and I love it. Even for such an achingly poignant and gorgeous song, in true Biscuits form it still ends with an absolutely majestic gag, and a lewd one at that, plus some brilliant wordplay re: busses on the way to their final destination… This is by far and away my favourite Biscuits song and possibly my favourite song ever.

7. (I’m Not Coming To Your) BBQ – Colour Me Wednesday
Chosen by Michael McNeil.

When I first heard this I was thrilled to discover that we’re not the only band with a vegan anthem! The song is about trying to navigate your veganism in non-vegan social groups, and illustrates the difficulty in expressing yourself and standing up for your values, only to find yourself ostracised for doing so. What impresses and inspires me about this song is the economy of the lyrics. They touch on a ton of themes and relatable scenarios without compromising on emotion or the groove of the song – It’s great. Something I struggle with in terms of lyrics is tautology and clarity, so I consider this track a peak to aspire to. I also love the call of “don’t you realise how much power you have?” about being able to make positive change and reduce harm – on point.

Everyone knows Rich T(ea) is an irritatingly skilled guitarist. And since he’s such a flash bastard his writing can be overlooked – he’s also an incredibly insightful, measured, and gifted story-teller. The pace that the plot of this song unfolds is just perfect, it builds and crescendos so delicately. My rendition of this track isn’t bad even though I probably only play about 3% of the notes that the original has, because the true weight of the song comes from how deftly RT paints his gorgeous picture of a love triangle between a boy, and girl, and a motorbike. It makes me want to learn to ride one, whipping about in my Ford Mondeo doesn’t quite have the same vibe… though I have got air-con and Bluetooth and an enormous boot. We’d struggle to get our backline to a gig using a Vincent…

9.   Look Dad No Tunes – Half Man Half Biscuit
Chosen by Michael McNeil.

Bands which are grave & edgy or perhaps might describe themselves as “sleazy” are not to my tastes… Nick Cave did all that better than anyone else could hope to and has done so for decades, so groups attempting to emulate that aura really don’t do it for me. Especially when it’s obviously, painfully contrived. Imagine my DELIGHT then, upon hearing the opening line of Look Dad No Tunes for the first time – “My life is comfortable, but I don’t want that image for my band”. I must’ve cackled like a goblin for a good minute or so. Nigel then proceeds to absolutely nail all of my feelings on most grunge, most metal, angsty indie, and basically any group which might have the words “raw” or “brutal” in their press release. If we’re out watching a gig and a band is committing such crimes as above, Hazel & I might lean into one another & quietly sing “my liiiife….” in order to convey our feeling. This song also has some very acrobatic rhymes which are drop dead funny – “I feel cursed and sore like I’m Thurston Moore” and “In my bedroom in Nantwich, I stamp my foot down on the angst switch”… The repeated refrain as the outro is also exceptional but is better discovered first hand.

Exquisite. Many years since this I first saw this. Reduced to helpless tears.

Flux Capacitors support Half Man Half Biscuit on the following dates;