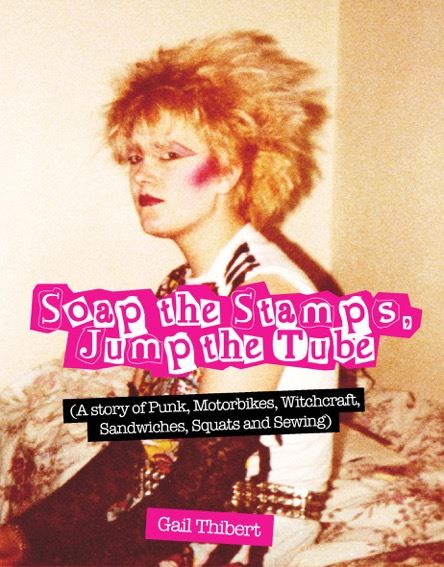 With the Cherry Red 5 CD boxed set, Silhouettes and Statues (reviewed here)  due any day and John Robbs book on Goth, (provisionally entitled) The Art Of Darkness due out soon, the era and its early days are coming under the retro-cultural spotlight again….

By 1983 Punk in the UK was ‘dead’ according to many – but in reality it had splintered into lots of different factions; Anarcho, Oi!, psychobilly and a loosely affiliated ‘scene’ based around the squats of London which journalist Richard North labelled Positive Punk for an infamous NME feature…   Someone who was there is Gail Thibert who in 1983 was a 19 year old, blue-haired escapee from suburban drudgery (and later a member of the band theLost Cherees)

Gail is crowd-funding her autobiography, entitled ‘Soap the Stamps, Jump The Tube: A Story of Punk, Motorbikes, Witchcraft, Sandwiches, Squats & Sewing’ ..  Which follows her journey through the 80’s underground music and squatting scene in London. Along the way, Gail meets the good, the bad and the just plain crazy while riding the crest of the anarcho and post-punk wave of music which defined the early 80s underground.

To help give a flavour of the times I asked her to pick ten tracks which soundtracked the days when ‘anarcho’ and punk were gradually evolving into … Goth!

(Gail) This is my all-time favourite record. there is something so ethereal about it! I want it played at my funeral. I used to go to sleep to this track. It’s the Heineken of songs  – it reaches the parts other music can’t reach. (oeer!)

From In The Flat Field (1980)  The importance of  Bauhaus cannot be overstated; in many ways the band which defined the early 80’s as far as dark, sexy, serious rock was concerned.

(Gail)  Another band I adored, saw them live at the Lyceum, Had (and still have) all their albums.

Should have been massive.  Over ambitious maybe and ahead of their time.  1983

(Gail) I used to see Sex Gang Children a lot- my friend Dave changed his name to Sebastian because of them… it’s all in the book!

‘Positive Punk’ Figureheads. The term was a necessary invention to distinguish it from the Exploited / Discharge type bands.perhaps… then again, you could hear the difference

(Gail) Southern Death Cult were just gigging in the early eighties and I had an invite to go to the filming of their video in Brixton (I think it was there- memory is a bit rusty). I’d never heard of them so didn’t go. Kicking myself now though of course. Still a big fan of the Cult.

Blood and Roses – I Spit Upon Your Grave

One of the great ‘lost’ bands from the era – try and locate a copy of the now deleted compilation album Same As It Never Was .

(Gail)  I loved, loved, loved this band . I saw them at Merlins Cave in Clerkenwell (among other places) and then ended up moving in across the road when it closed down. I bought what I thought was a Blood and Roses test pressing from my local record dealers and was disgusted when it turned out to be a Rolling Stones test pressing instead. I took it back. the dealer bought a mansion. This was defiantly when punk crossed over into goth and we started painting skulls on our clothing- well, I did anyway!

(Gail)  The first band I shared a stage with, that I had actually heard of. I was too shy to talk to Sid and Zillah at the time but proud to now call them mates. I loved that they were different and had their own style. I used the word Rubella for a business and was over the moon that someone else was using the word. It seemed like a beautiful word! Always used to dance at RB gigs.

Another brilliant band who should have got a lot more recognition.  Michelle runs Sexy Hooligans Clothing nowadays.

(Gail) OK I admit it- I only chose it cos the drummer here is my boyfriend!  I wasn’t that keen on Brigandage at the time but met Michelle over the years and get on well. Another friend (Marina, who is in the book, as is Des ) joined them on bass for a while and Des rejoined them on drums. I think they are a band that grow on you, cos I can remember seeing them a few times and eventually liking them.

Penetration – Come into the Open

From an earlier era but a huge influence on many female-fronted Gothic acts: Skeletal Family, All About Eve as well as Brigandage.

(Gail)  Pauline Murray just mesmerized me! her voice still does. I can’t believe I sat next to her about a year ago (or two) and didn’t recognize her! Sarah Pink told me and by the time I was ready to do the  ‘I’m not worthy’ bow,  she had already scarpered.  What a voice!

Workaholic Kirk is constantly on tour as you know I’m sure.

(Gail)  OMG! This band was the nuts! I have an interesting story about Kirk Brandon and psychic gifts, but you’ll have to wait for the next book to find out about it. Another powerful voice that moved me. Saw them recently and was blown away.

P.I.L- The Flowers of Romance.

(Gail)  I’ve got binoculars on top of Box Hill! Who hasn’t? Used to go there as a kid. My flatmate had her PIL Metal Box stolen by a ghost!  You’ll have to buy the book for the full story!

Here is Gails ‘Unbound’ Pledge Page and a short film about the project….

This looks like it is going to be a really great autobiography…. well worth supporting if you lived through the era and feel a bit of kinship with the lady who “is still in love with punk music and playing in bands and currently sings with Sarah Pink’s Gravediggers and Flowers in the Dustbin, and works as a clairvoyant medium.

Cherry Red have released Silhouettes & Statues: A Gothic Revolution which is  available from here and features many of the tracks above.

Words (except where specified)  Ged Babey