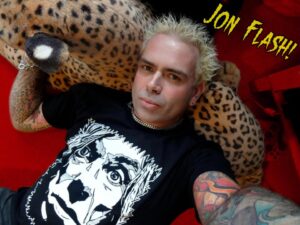 Jon Flash – My Top Ten Glam Punk Songs Ever ; on the event of his 50th

Jon Flash, from Pompey, a former chef, postman, cyclist, sex symbol and lover of Glam Punk Rock’n’Roll is a well known face and scenster in the South, London and at Rebellion.  He’s a ligger with attitude and promoter of cheap and drunken gigs at the Barn, (Milford Arms, Fratton Portsmouth with his comrade Jon Lamb (the Human Jukebox)

On the event of his 50th Birthday ( no, he doesn’t look it!) Louder Than War asked him to pick his Top Ten  Glam-Punk tunes, which he did, with some scrawled comments underneath …. here they are.  Happy Birthday Flash and many more  xx

Gary Glitter – I Love You Love Me
C’mon, we all loved him at the time. First single I ever bought. A vile, horrible man as we all know now, but the music is still awesome.

Generation X – Paradise West One
…or anything else they ever did…

Slade – Squeeze Me Please Me
I really wanted to see Slade In Flame when it came out but my mum wouldn’t let me!

Hollywood Brats Chez Maxines
I just love it! ( no video available and this is the only Brats song ever filmed albeit six years after they split)

The Sweet -Teenage Rampage
The first song that gave me an identity… (writing gets indescipherable..)

Great choices Jon… and a here’s a bonus track – The Bermondsey Joyriders – who play with full supporting cast the Featherz, Mid Age Rampage, Archive 45 and Sweet Jonny at Flash’s birthday gig at the Barn, Milton Arms, Portsmouth this Saturday the 11th October.