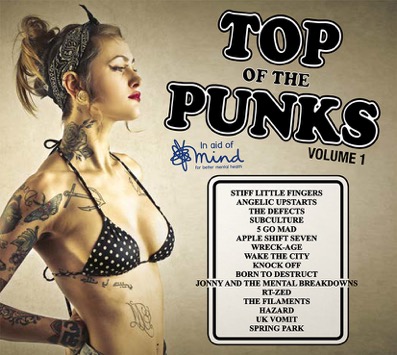 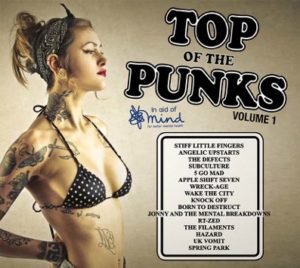 As a long time sufferer of depression, Top Of The Punks organiser Simon Turner felt it was time to do something to help other people with similar conditions; from this desire Top Of The Punks was born – Simon had a simple plan to pull together a compilation album, perhaps get a couple of small prizes together for a charity auction to be held on launch night…what Simon didn’t realise was that he had clearly struck a chord! Having asked a few artists to contribute he was then approached by some major names all keen to lend their support.

After a huge personal effort the ‘Top Of The Punks’ album is ready for launch; a 16 track compilation album featuring artists such as Stiff Little Fingers, The Filaments, Angelic Upstarts and The Defects as well as other established bands and grass roots acts. All proceeds will be directed to the mental health charity Mind.

Not only have the artists contributed tracks, Marshall Amplification have donated one of their brand new CODE25 digital modelling amplifiers to Top Of The Punks. This will be auctioned over 30 days on Ebay from Thursday 16th March as part of Top Of The Punks fundraising efforts again in aid of the metal health charity Mind.

Only this particular amplifier, signed by all members of Stiff Little Fingers, comes exclusively pre-set with SLF front-man Jakes Burns guitar tone, as set by the man himself!

Simon went on to say; “I am extremely grateful for Marshall and to Jake for supporting the project and helping raise much needed funds for this amazing charity.”…“Mental health issues are all around us. I don’t know single person who hasn’t been touched by its effects. Top Of The Punks is my modest way of supporting an amazing charity that helps those who need it and to have the added support of Marshall, Jake and all the other contributors, well its just blown me away.”

Released on Friday 16th June, just 400 limited edition cd’s will be produced, made available from selected independent record stores, contributing artists and the Top Of The Punks website.

Pre-orders of the album, Tee shirts and other merchandise can be made now at Top Of The Punks – The release will be available to download and stream from the usual services.

To support the release, an all-day launch event will be held at The Bear, Northampton, the towns dedicated punk venue on Saturday 17th June 2017 and many of the contributing acts to
the album will be performing. 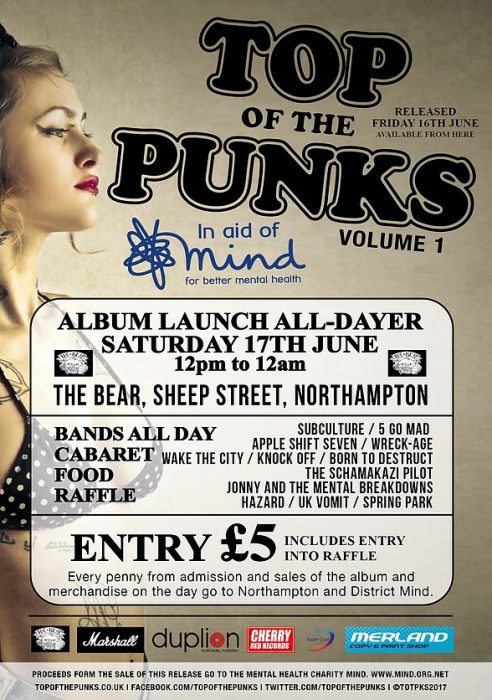 Inspiration for the logo and sleeve design takes a lead from the legendary Top Of The Pops album covers, which are iconic pieces from music history.