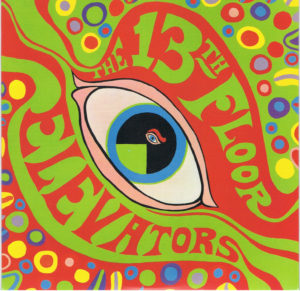 There has been a lot of excited talk of late about the reunion and return of 1960s psychedelic garage rockers the 13th Floor Elevators – including a potential UK tour – and with good reason.

The Texan quartet were one of the most visceral and exciting bands of the era, with their cosmic lyricism, meaty garage sound and Roky Erickson’s distinctly tremble of a vocal style.

So, with that considered, I’m going to dive back into the world of psychedelic garage, as a reminder than psychedelia could be raw and visceral, and not all just going to San Francisco with flowers in your hair … starting, of course, with the 13th Floor Elevators themselves…

Really, I could have picked any 13th Floor Elevators song – from the winding Reverberation, the ultra-trippy lyricism of Slip Inside This House, or the upfront primitive garage of “You’re Gonna Miss Me” of “Fire Engine”, but this seems the most representative – Erickson’s vocal is typically trembly and at its very best for it, the pace is bold and breathless and the lyrics about the girl who seems to be operating in a timeframe outside of normal boundaries are full of a kind of stoned mysticism. The perfect introduction.

2. The Electric Prunes – I Had Too Much To Dream Last Night

No, not a song about the perils of eating cheese at night but an absolute classic of its genre, which builds and broods before reaching a chorus which buzzes and clatters, leaving the listener unsure whether the dream is a nightmarish bad trip. The lyrics about a gentle hand reaching to comfort somehow don’t make it seem any less moody or sprinkled with potential darkness; the walls of sound and ability to somehow wrap around the listener ensure that this is very much on the edgy side of psychedelia.

This is the band perhaps now most famous for launching the career of ZZ Top guitarist Billy Gibbons, but don’t hold that against them – it’s hard to connect their straightforward rock with this slice of psychedelic garage, marked out by its simple, effective refrain and subtle-as-a-brick lyricism about how “getting on an elevator” which doesn’t stop until you’ve reached the 99th floor in order to “make you feel how you should” , delivered in wonderfully droll, spaced-out fashion.

4. The Third Bardo – I’m Five Years Ahead Of My Time

In that respect, they were a bit like that girl the 13th Floor Elevators were singing about… sneaking up on the listener with no real chorus, instead relying on the moment the title is sung by singer Jeff Monn – later to have a solo career under the name Chris Moon – in a style almost like prophesying, after opening with some typical lyricism about heading into a new dimension. With a band name taken from the Tibetan Book of the Dead, this is the world of the cosmic at its most potentially authentic.

5. The Attack – Colours Of My Mind

Of course, psychedelic as a stand-alone genre has come to be associated as much with the UK as with America, as records such as “Piper at the Gates of Dawn” and even “Sergeant Peppers” seem go-to titles to mention. The niche genre of the “rock opera” certainly fuelled the movement too, particularly the quirky trailblazer “SF Sorrow” by the Pretty Things, a kind of twisted odyssey which Edward Lear might have written had he been feeling uncharacteristically grim. Early mod acts such as the Who, the Small Faces and the Creation would also adopt aspects of the genre; and the more garage-esque side of things did not go unnoticed by the British either, as Londoners the Attack created this paintbox of a guitar track; a kaleidoscope built from organ and guitar.

When Albert Hoffman first synthesized LSD in 1938, it was designed for psychiatric uses, a kind of assistant to this “golden age” of the growing field of psychoanalysis. Its initial purpose was not creativity, but openness – however they are two things which naturally very much go together. This list taps into a niche genre…now you just have to debate if I got it “right” and can climb to the next dimension , or if this list has fallen down the rabbit hole…

All words by Amy Britton. More writing by Amy can be found at here Louder Than War author’s archive. You can also find Amy on twitter as @amyjaybritton.