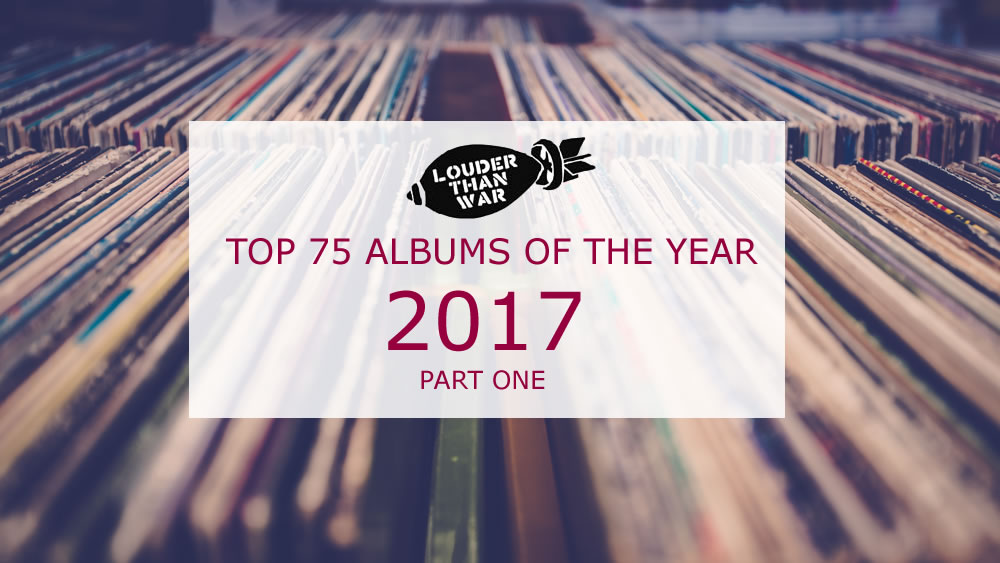 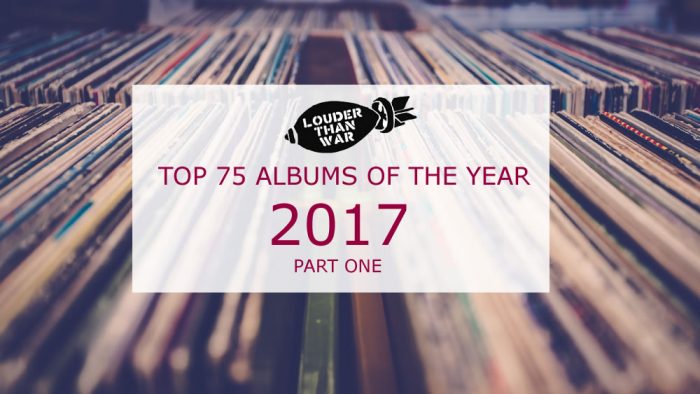 Finally, it’s that time once again to name our best albums of 2017. And what a year it’s been! The shock Brexit vote made us the pariahs of Europe, Jeremy Corbyn unexpectedly became everyone’s favourite gig chant and Liam Gallagher came back, not only releasing a chart-topping album, but also filling arenas around the UK!

2017 saw the underground resurgence of guitar-based music, the persistence of grime and the dominance of the UK charts by the fewest number of artists in living memory, culminating in a carrot-topped Haligonian having sixteen singles in the top twenty!

Without further ado, we give you our top 75, (well 75 to 26 on this page and the top 25 on page 2!) as voted by contributors to Louder Than War website – the magazine publishes its own chart!

Brilliantly brooding, 21st-century gothic-tinged rock with a compelling iciness that adds a sparseness and emotional content to a mix of sludge metal and neo-gothic atmospheres.

A long way from their roots in the Norwegian Black metal scene, Ulver delivered an album of hypnotic near-eighties pop, like Talk Talk on dark matter steroids and somehow it worked…

The Canadian drone droogs, with songs that clock in at 40 minutes plus, took the music to its empty and enthralling extremes.

Finding light and shade in their furious free-noise kraut trips, Hey Colossus reacted to the darkening shadows of the 21st century with an album that is, in parts, almost angular modern pop.

Michael Head is the great lost British songwriter – the Liverpool-born melodic king is much cherished in the underground and this album could finally help to bridge the gap with the mainstream. Read LTW’s Matt Mead’s on the album.

Youthful Stevenage crew put the electricity and fierce energy back into punk rock with an album that reaffirms the primal rush and righteous political anger of the form, with an inventiveness that matches their austerity-era angst.

Debut progressive rock album from the British guitar band – recorded at night, apparently, in an abbey on the Isle of Wight.

If this is the last album from the mighty Fall, it’s one hell of a sign-off – as gnarly and yet as listenable as ever. We wish Mark E. Smith well.

Yet more quirky yet crafted inventiveness from what has remarkably become one of the biggest bands in the world.

“They combine elements from several disparate genres related to 70s punk rock, which results in a hard-hitting brand of rock ‘n’ roll,” said Hannah McFaull in 2014. This, their second album, is punk meets Slade on steroids.

Premier Manc drone crew add to their compelling mystery with a further out-there work that makes big statements in layers of compelling sound.

Manchester post-punk three-piece release storming live album from their set at the city’s Gorilla. “Nothing can top that for pure excitement – scintillating, throbbing music at its very best, music that cuts deep into the soul,” (LTW’s Nigel Carr) Read review here.

Sixth album from the seven-piece indie pop band from Cardiff who burst onto the scene ten years ago. This album is packed with swirling ballads and power pop.

Maverick Manchester band with record collections as eclectic as their muse meld wonk pop with psyche trips and folky meanderings into a cunning and lysergic perfection.

“Feels like it’s Bauhaus in the 21st century. which by all means isn’t a bad thing. The Bug has brought his own feel, without doubt, in the pairing of The Bug’s Kevin Martin and Earth’s Dylan Carlson,”  – Darragh O. Bleak industrial 21st-Century, lurching electronic drone.

‘The Godfather of grime’ returns to reclaim his territory with an album that is diverse as a statement of intent in the most cutting-edge musical genre in the UK of the year.

Fresh set of songs from the Seventies hitmakers. “The thing with Sparks and this album is even though the songs are produced by a multicoloured deity descended from some multi-dimensional universe only Sparks can see, it still holds an unusual catchiness that just pulls you right in.” Jay Stansfield – Read full review here.

Two decades in and now working solo under the Liars flag, wedding-dress-wearing Angus Andrew delivers his most diverse and eccentric work, yet with a dash of wonk electronics and deranged neo-Butthole-Surfers kooky rock, somehow made into a very listenable whole. Read live review by LTW’s Lee Hammond.

Gentle avante-folk from Ben Chasny, who is also guitarist with psychedelic band, Comets On Fire.

Bit of a prog metal supergroup based round the omnipresent Mike Portnoy and Bumblefoot, who once played in G’n’R for his sins. Described by one of the band in an interview as “strategic wankery,” it’s a bombastic and gloriously over-the-top assault. (LTW’s Mike Ainscoe) Read interview with the band’s Derek Sherinian here.

Volcano is the second studio album by English psychedelic rock band, Temples, released Heavenly Records. The album was recorded at their home studio and is self-produced. Temples member, James Bagshaw described the album as being, “A result of implementing a load of things that we didn’t know about the first time around [on Sun Structures].” (Wikipedia)

Forging ahead whilst everyone else squabbles, Glasgow’s Mogwai have a work ethic that is to be admired, especially when they populate it with near-instrumental brilliance like this.

It’s a brave record in an environment that demands “bangers,” repeating a formula over again in ever-decreasing circles of audience attention spans, but it’s a success on every level, more than worth what seemed like the endless wait that’s coming to an end. (LTW writer David Brown on his own blog, Even The Stars)

Beyond the fringes, the black metal drummer’s album about plants has been recorded in isolation. Now with a fully-fledged line-up, he has lost none of his innovative grind.

Hull electronica and spoken-word follow-up to My People Come From The Sea from “two fifty-year-old blokes from Hull.” LTW’s Ged Babey interviewed them here.

There is no way that a band can still sound so urgent and creative this far down the line, but Wire just get on with it, releasing brilliant albums just below the radar, honing their craft, restlessly creative and thrillingly bored easily. Silver/Lead is the best yet on this endless road – an album so full of ideas and moods and pop art genius that you can lose yourself in it for days. (LTW’s John Robb) Read full review here

Artful introspection electronica inspired by JG Ballard that is a personal trip and groundbreaking release.

Pumping through Austin’s clogged Red River arteries since 2014, the Austin firebrands have temporarily broken their vows of Shaolin silence with ten tracks of unadulterated defibrillation –an electrifying monument to distorted melody and verbal hooks brought to a full boil. (Paul Stinson)

With their post-punk sound/attitude, they can easily stand side-by-side with classic Sonic Youth, The Pop Group and The Fall (albeit with a more tuneful singer!). At times they are reminiscent of the likes of Glasgow band, Urusei Yatsura and their ilk. (LTW’s Neil Hodge) Read full review here.

Endangered Philosophies is a cavernous sounding album, made for big spaces and open minds. There remains a traditional river of hip-hop culture running through its centre (The Son Of Immigrants, Beyond The Madness, Nothing Stays Permanent) but it is there as a foundation for the group to build on, throwing everything from shoegaze, industrial, and noise into the mix. (LTW’s Simon Tucker) Read Full Review Here.

Long-awaited album number two for the Los Angeles trio, the follow up to 2013 Days Are Gone. This album is steeped in honest, slick, glossy pop.

The 24th album by Dayton, Ohio group Guided by Voices. It is also the 100th album recorded by main member, Robert Pollard and further proof of their classic melodic prowess and belief in the flickering flame of guitars.

Further cementing his position on the recently-vacated top tier of rock, after the sad loss of Bowie and the old gang, Cave brings his dark clouds of romance and loss to his crafted songwriting genius.

A perfect place for the uninitiated, the curious or the die-hard fan. It is a collection that serves as a celebration of one of the most unique, progressive, singular and intelligent outfits working in modern popular culture. Dig in and be rewarded. (LTW’s Simon Tucker)  Read full review here.

Third album from the lad from Burnage – building on the arena-cramming success of his eponymous debut and 2015’s Chasing Yesterday. Includes the glam stomping single, Holy Mountain.

A rise from The Fall, a reimagining of history, garage band illumination, vocal harmonies from 1970s rock, the snarl of punk turned to positive use. The sound of a real band playing the music they love. (LTW’s Matt Shaw) Read full review here.

Fantastically lunatic mash of prog and psych from prolific Australian band who, like their label mates Oh Sees, seem to flood the world with wonderful and lunatic music.

Groundbreaking influential band return from nowhere with their greatest album yet – brilliant dislocation of post-metal/noise/crank with as many ideas as ever. (LTW’s John Robb)

Bains steps up on his soapbox and delivers a long, impassioned, powerfully articulate speech on the state of America and the trials and tribulations of its young people. (Mark Deming)

Yet more apocalyptic folk genius from the Newcastle troubadour, with his thrillingly obtuse guitar shapes somehow collapsing into perfect songs that capture atmospheres with precise and off-kilter storytelling brilliance.

Utopia is a pastel chalk painting full of smudged edges. It is an album that takes a commitment on the part of the listener and will give you a different outcome each time you journey with it, depending on what choices you make as a participant. (LTW’s Simon Tucker) Read full review here.

It’s not all about loud rock and roll head rush though. Recent single, The Gangway muses romantically with an air of realism that “growing up true is hard to do,” as a reflection on the pressures on young people today. (LTW’s Dave Brown on Even The Stars)

Compiled by John Robb & Nigel Carr for Louderthanwar.com – thanks to all of you who contributed!