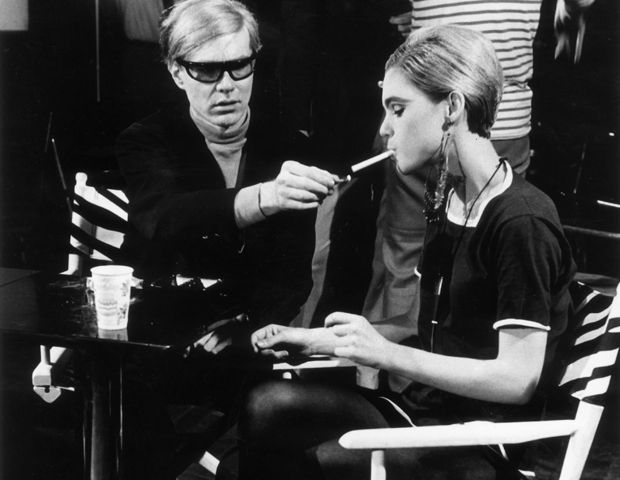 Recently, the seminal film website A Taste of Cinema, something of an authoritative voice on cinematic matters, published their somewhat controversial list of the 15 greatest avant-garde filmmakers of all time. It was clearly designed to incite debate and not be too obvious (the complete omission of Ingmar Bergman, for example and classification as “new wave” filmmakers as “avant-garde”, for example) – but all that considered their number one choice of Andy Warhol controversially shunting Luis Bunuel into second place was something of a surprise. But maybe there’s been no better time, as Pop Art culture has a bit of a “moment” given the recent BBC season, to reconsider Warhol films, largely neglected in favour of the soup cans and Marilyns, and look over the top 5.

1.IMITATION OF CHRIST (1967) With a title inspired by the works of Dutch mystic Thomas a Kempis, which is referenced within the film, this one of Warhol’s most thematically complex works, dwelling on family in a blatantly Fruedian fashion as the protagonist, known simply as Son, lets his Oedipus complex manifest in his relationship with the affectionate maid, played sensually by Nico, while his parents stimulteanously try and psychoanalyse him themselves and confess their own attraction to him. This is essentially a psychological film in which the Oedipus eats itself; edited down from a winding 8-hour piece that some compared to Victor Hugo…perhaps not what the casual Warhol observer would expect!

2.POOR LITTLE RICH GIRL (1965) Notably the first film of Warhol’s to feature one of film/art history’s most iconic muses, the magnetic Edie Sedgewick, Poor Little Rich Girl also delves on Pop Art’s favourite juxtapositions of the everyday and the bigger, more glamourous world. Pop Art collided with the birth of Cultural Studies and the idea that the everyday could be worthy of artistic scrutiny (summarised by the Godfather of Cultural Studies, George Perec with his famous “consider your teaspoons” quote), and early Warhol films such as “Sleep” certainly reflect this. But what when the everyday activities of someone not quite so everyday are focused on? Sedgewick was Warhols superstar, and the close-ups of her everyday activities such as ordering coffee and applying make-up the morning, along with more counter-culture activities such as smoking weed, are given a strangely moving feel by the mixed use of standard filming and out-of-focus shots from a faulty reel that had been accidentally used. Sedgewick’s doomed beauty was the true star of many of Warhols most iconic films (notably also “Vinyl” and “Beauty”) but never more soo than here.

3.CHELSEA GIRLS (1966) One thats come to be regarded as an art-house classic now, initially many critics weren’t so sure – the film critic Roger Ebert claimed upon viewing this said that “Warhol has nothing to say and no technique to say it with”. Nowadays, this film which Warhol co-directed with Paul Morrissey has come to be seen as a radical avant-garde masterpiece, its split screen technique subliminally influential on a lot of modern film and television; albiet in watered down form as the two screens in “Chelsea Girls” are split between two projectionists -one working in monochrome and one in colour, it can be taken as a meditation on the dual aspects of life or simply an artistic view of a super-cool world populated with “Warhol superstars” such as Brigid Berlin, Ondine, Nico and Gerard Malanga, shot in their natural environment of the iconic Chelsea Hotel. Avantgarde has had far, far more to actually say contribute, but this may be its peak moment of “cool.”

4.FLESH FOR FRANKENSTEIN (1973) Yes, in the midst of all this admiration of artistic technique I had opted to pick this gloriously silly, X-rated 3D adaptation of Frankenstein, another collobaration between Warhol and Paul Morrissey. Its gory, its fun, and as 3D nowadays expands as a field and tries to be a bit too clever and it nuances, this has exactly what you need from a 3D film (ie, lots of flying axes at the screen.) Not exactly the example of “avant-garde” that a Taste of Cinema were probably thinking of when they compiled their list, but a wonderful dose of trashy horror. Which is always a good thing, right?…

5. LUPE (1965) Warhol’s last film with Edie Sedgewick is an almost postmodern take on the life and death of the actress Lupe Velez which seems to acts as much like a study Īof its main star (as in the aforementioned “Poor Little Rich Girl”) with shots of Sedgewick-style activities cut with shots of her with her head in the toilet , an allusion to allegations that Velez had indeed died this way. Its never mentioned that this in itself could allude to Sedgewicks lifestyle, having her own vices (she would tragically die of a barbiturate overdose aged 28) and also having suffered from bulimia so severe she had been kept iinpatient treatment for it as a teenager (during an age in which bulimia didn’t even have a medical name.) A biography that says more about its star than it does about its subject…no wonder critics like Clement Greenberg turned towards Warhol as a consistent example of what they loathed about postmodernism. I, on the other hand, love postmodernism…and while I’m not going to go so far as to say that A Taste Of Cinema were right to place Warhol as the top avant-garde filmmaker, a quick glance through some of his greatest moments certainly suggests a place there.

All words by Amy Britton. You can find more by Amy over at Louder Than War author’s archive.