Home Blogs top 5 Masala dosas in the UK- Indian food at its best! 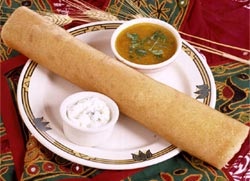 top 5 Masala dosas in the UK

As much as Nigel Farrage would hate to admit it, Indian food is not only the most popular food in the UK, it’s also part of our national identity now. Without the so called curry we, ironically, just would not feel British any more.

Looking like a helicopter blade and hanging from each end of the plate – The Masala Dosa is a bit of a cult food in these parts.

The Indian food from the south of the country is made up of various fillings but mainly a mildly spicy potato masala wrapped in a rice pancake- it looks weird and tastes amazing and doesn’t involve dead things so it’s win/win all the way.

In India it’s a common sit and many places have it as a breakfast. In the UK it’s much more underground with a few specialist curry houses selling them. This is slowly changing and if anyone was smart enough it could be made into a high street snack staple the way that sushi is now…

The expression ‘eyes are bigger than your belly’ was invented for this super dosa- at more than 2 feet long this is a stunning treat that takes a lot of work to get through- not because of its taste because it is perfectly crisp but because of its sheer size. The restuarant also does loads of other cool stuff and is the perfect spot for a pre gig meal being n the edge of the city centre and next to the Academy venue. `they also play great `indian music in here- not the cliched stuff and it must drive the staff mad as we endlessly ask what the tunes are!

3. Punjab Restuarant : Manchester
A Mancunian legend, the Punjab is the best place to eat in the famous curry mile of Rusholme. The dosas are great- crispy on the edges and with a great coconut and also a curry dip.The staff are really friendly as well and it’s a pre gig custom for many to meat in here. An institution – the Punjab has been there for ever and feels like part of the family and it’s great sitting at the window eating a dosa and watching the beautiful chaos of Rusholme outside.

3. Coconut Lagoon : York
A real surprise find and yet another dosa place near a venue- this time York Fibbers- they served up the biggest ever dosa I’v ever seen- even bigger than Liverpool and we eat with a superhuman appetite whilst listening to this amazing fifties soundtrack on the music system of Goan swing and bossa nova recorded in the Portuguese days- again great staff- had a long and fascinating conversation about India with them- the decor looks fab as well- like an old shop it was done up ina way tat made you feel like you were in an India version of Portuguese Goa in the last days of a crumbling empire. A totally unique spot.

4. Madras In Wales : Cardiff
Smaller than the gigantosaurus dosas we reviewed in the above list they still serve up a real crispy treat and are proof of the gradual rise of the dosa to its ultimate place as a key British street food.

5. Sagar : London
Just off Tottenham Court Road, Sagar is a really cool place with lots of South India food- the chefs are from the small town of Udip in India- a real food town blessed by the lords and the centre of South India cuisine from with the beloved Masala dosa comes from. A quiet Oasis surrounded by the bustle and fast food brawl of central London this place is really recommended.