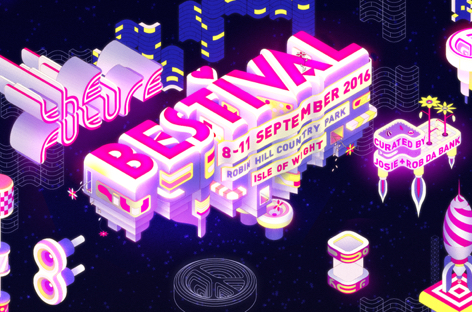 The Bestival line-up gets us so god-damn excited every single year that it would be almost rude not to compile a fresh list of all the great acts to catch for this year’s, The Future Is Here themed she-bang. Excluding the headliners, Harley Cassidy chose 12 of the best live bands and artists to see this year… so far.

Animal Collective:
The sonic son’s of Baltimore have paved a weird, windy path of adventurous psychedelia since 2003 and after a short stint away from the studio, their collective transcendental power has saw them throw all things magical into a melting pot, pop out a new album and take on yet another brand new form of life.

Black Honey:
A British band who look like something out of a 90s, desert-set Tarantino film, Black Honey have been giving indie a good name following relentless touring, an insatiable, raw energy  complemented by a somewhat rose-tinted sophistication. Unmissable.

Hinds:
Hinds are a Spanish four-piece from Madrid whose fun lo-fi garage pop have made them the girl band everyone wants to join. They’ve played shows with The Strokes and The Libertines (no biggie), have an untouchable youthful energy and their debut album, Leave Me Alone is brimming with charm and the catchiest of choruses.

Jagwar Ma:
Not your typical run of the mill psych band, Jagwar Ma’s heady, dance-influenced sound has been heralded as Madchester 2.0 with a wondrous mix of baggy, groove and soul. A duo from the ever-blossoming gene-pool of Australia, their return to Bestival after three years will be joyous.

MO:
From teenage punk activist to Spice Girl’s inspired alt-pop to mega, chart-topping, multi-million selling collaborations, MO’s ascent has evaded every nook and cranny and made her all the more interesting for it. A Danish native, MO’s star may have shone brighter thanks to her Diplo collab, Lean On, but her real talent lies in her amazingly energetic live shows proving she’s still a rebel at heart.

Skepta:
The cocksure ringleader of grime music’s newly re-ignited fire, Skepta has been unfathomably important on the British urban music scene, turning his back on designer-label wearing posing and instead creating a template for working-class youth, using social commentary to poke fun at himself, the government and anyone in general. After catching the attention of Drake and Kanye West, expect the unexpected.

Spring King:
Mancunian garage rockers Spring King have many accolades under their belt; amongst them are the fact that they were the first band to be played on Apple Beats 1, they have a sax solo in one of their songs and they converted their bathroom into something much more useful… a recording studio.

Sunflower Bean:
Brooklyn’s brightest young things come in the form of a trio fronted by Saint Laurent favourite Julia Cummings who deal in dreamy, lo-fi angst painted by the melodic trauma of being young and wondering what the fuck life is all about.

VANT:
They’ve been signed to Parlophone Records and have cited their philosophy to be inspired by The Clash, so you already know you’re in for a treat. Fronted by Mattie Vant, VANT’s main mission is to tackle our concept of a radical band in 2016 and they do it with aplomb.

Wolf Alice:
A band as versatile as they are dynamic, Wolf Alice have been indie music’s biggest breakthrough, steadily building their fanbase and releasing blindingly good single after single since their formation in 2012. A more refined take on 90s grunge, riot-grrl, britpop and everything in between, the four-piece are mesmerising live.

The Wytches:
If you like dark, tortured psychedelia then look no further than Brightonian three-piece, The Wytches. After the success of their brilliant debut, Annabel Dream Reader, the band’s raw vocals and surf-doom riffs look set to expand and excite for 2016.

Keep an eye out for the second part to our three-piece Top 12 Acts To See At Bestival feature!

All words by Harley Cassidy. You can read more from Harley on Louder Than War here or follow her on Twitter @harleycassidy.