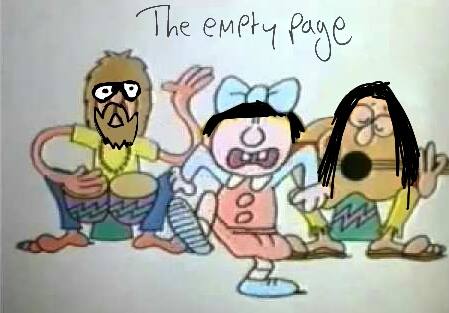 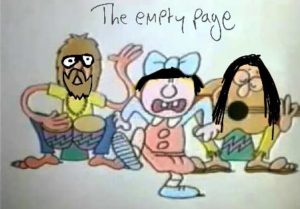 Purists have often pointed out that the trio is the perfect line up for a rock band – no space to hide and every key insyrcmtnhas its role. The Empty Page are a fast rising Manchester band who are a trio and have kindly given us a list of their top 1o trios.

This month The Empty Page will be playing their biggest show yet gig at Manchester Ritz on Saturday April 29th the Membranes and their 20 piece choir and special film about the universe. Also on the bill will be Brix and the Extricated, The Nightingales, Evil Blizzard, Dub Sex, and The Blinders . The gig is only £10 and tickets are selling fast. All details from here.

(Giz) We all love these guys’ catchy, fuzzy, American alt rock, when we first started jamming we played a bunch of covers including Feel The Pain, so you could say they have definitely shaped our sound. This band are amazing and J Mascis is a huge influence on me and my guitar playing. I have one of his signature Fender Jazzmasters and it makes an appearance in our video for Cracks in the Surface. Take a look at the Freak scene video and see if you can guess where it was filmed?

(the Dinosaur Jnr video for Freak Scene was filmed in the Membranes back garden and all the props were from the membranes garden..)

(Jim) What’s not to love about the Beastie Boys? They write, they perform, they make films, make clothes, a magazine, owned a label (who produced music from amongst many others, At The Drive-In, Lucious Jackson and some bloke called Sean Lennon), they play hip hop, rock, hardcore, jazz, punk, easy listening, country…  They’ve been a consistent force in hip hop circles and their innovation, irreverence and politicism still inspires so many artists – and my son’s middle name is Adam, after MCA who died the year my son was born.

Harvey Milk – Motown (from Life The Best Game in Town)

(Giz) Harvey Milk are a doom, sludge alt rock band from Athens Georgia. They are named after an American gay activist and politician and have been writing killer guitar riffs and making a heavy noise since the early 90’s. I first saw them supporting Oxbow at the Ruby Lounge and they blew me away. This trio are one of my favourite bands ever!  Check out the album Life…the best game in town.

Placebo – 36 degrees (from Placebo)
(Kel) It was at my first Reading Festival that I discovered Placebo, there was a big buzz about some band with a singer who was a guy who looked like a girl and that was enough to pique my teenage interest as I’ve always loved androgynous characters. My mate and I went to see what all the fuss was about and could barely get in the tent but we fell madly in love with Brian Molko. I went home and bought the debut album straight away and must have listened to it solidly for my entire teenage years. It has so many great tracks but there’s something about 36 degrees which sends me right back to that time.

(Jim) Ask any drummer their favourite ‘sound’. If they were around in the 90s, the chances are they’ll mention Troublegum and go all doe eyed. I saw Therapy? a few times but the free gig they did at The Boardwalk was phenomenal. I’d never heard anything so dark and urgent and loud!