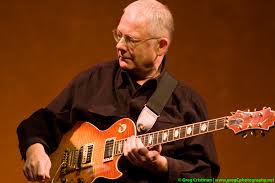 In 2012 Robert Fripp announced his retirement from the music industry, declaring it to be “a joyless exercise in futility”. However the enigmatic guitarist does have a history of prematurely handing in his notice, and despite his earlier pronouncement Fripp’s latest version of King Crimson (mk 8) has just completed a highly successful UK tour.

In celebration of his unpredictable creative muse, we look at 10 instances of the often unlikely team-ups which dot Fripp’s celebrated career.

In 1973 Fripp was big news because of King Crimson , while Eno had established himself via Roxy Music and his pioneering ambient record Discreet Music. Together they produced (No Pussyfooting), which blended the pair’s talents to dramatic, hypnotic effect. The album was a definitive piece of alternative music – a slowly stirring cauldron of ingredients at once soothing and alarming, a formative tract on the development of drone and dark ambient.

They did further work together on Evening Star (1975) and The Equatorial Stars (2004), but nothing would surpass the brilliance of that first collaboration.