Home Blogs Top 10 concept albums by Transmaniacon ‘a list where no-one else dares... 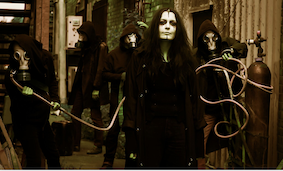 Here are the top 11 concept albums that were put together collectively by Transmaniacon. The self-styled Heavy Progressive Rock band for the 21st Century Schizoid People of the Blue Planet who have just recorded their own great concept album with guests like Lydia Lunch which we highly recommend with its dark and wonderful sense of adventure and which you can preorder from here
They did put together ten but wanted to add one from Lydia Lunch in there as a bonus too.

CONCEPT ALBUM LISTLydia and Maya both chose Lou Reed, perhaps appropriate especially for the New Yorker in our group but also from both of our ‘Suzie Pellet’s’ – a street survivor living in a murky underworld of shady characters. Perhaps every Lou Reed album is a concept piece, every song even (think of ‘Street Hassle’), or even his whole carreer ?Berlin – Lou Reed (1973)A concept album about coping with the daily struggle of a drug addiction. Thanks to a no opt out broad musical education from my father I discovered the album when I was a child. For me, the power of a concept album is always the narrative and I have very fond memories of dancing around the house imagining myself as a mournful ballet dancer and creating sad narratives around whoever Caroline might have been. Although it wasn’t until later that I understood the true ‘concept of the album’ the sad beauty and slow pain was always evident to me and in some way very appealing.https://www.youtube.com/watch?v=-wL1edIlgzs  (‘Caroline Says I’)Thick as a Brick – Jethro Tull (1972)Should perhaps not really be on this list as it is meant as a parody of a ‘concept album’ but the idea is just so brilliant- it is the epitome of talented musicians, creating carefully crafted, well thought out music with a real sense of fun. The piece is a real commitment to the idea of concept albums and encompassed the lyrics, supposedly based on the poem of a child genius-Gerald Bostock, a 12 page newspaper with the lyrics and stories about a poetry competition and Bostock’s disqualification and a very complex live show showcasing the complicated progressive style music and many costume changes and the whole show stopping to take a phone call mid-way through the set!https://www.youtube.com/watch?v=EUGBJA-eYEY   (‘Part 1’)Warrior at the Edge of Time – HawkwindLoosely based on the concept of Moorcock’s novel The Eternal Champion this might well be Hawkwind’s finest studio album. All the usual stuff is there, Lemmy’s pulverising bass, Brock’s “unique” guitar riffing, the sci-fi fantasy vocals, but we also get Simon House’s epic washes of synth and atmospheric violin. Plus, in Opa Loka, some of the greatest motoric krautrock that Neu never made.https://www.youtube.com/watch?v=AkagvXwDsYU    (‘Kings of Speed’)Quadrophenia – The WhoPretty much a shoo-in for any list of the greatest concept albums, this double finds the Who at one of their many peaks. Great songs, great playing (naturally), and a proper concept followed diligently throughout. The fact that it ultimately spawned a movie pays tribute to the strength of the story. Townsend reckons it’s the Who’s last great album, and they “never recorded anything that was so ambitious or audacious again”https://www.youtube.com/watch?v=zA1l-2jrVCY    (‘5.15’)Captain Lockheed and the Starfighters – Robert CalvertMusically this might as well be another classic Hawkwind album, but it’s elevated in a list of the all time great concepts by the dialogue and content that’s interspersed between the songs. The list of participants is pretty striking too. Alongside the usual Hawkwind stalwarts there’s involvement from Brian Eno, Viv Stanshall, Twink, and Jim Capaldi – testament to how highly Bob Calvert was regarded at the time. And the band rocks.https://www.youtube.com/watch?v=yEBE5RqtV9U   (‘Ejection’)2112 – RushStrictly speaking perhaps not a concept album at all, as the concept doesn’t really extend beyond side one. But side one more than compensates. In 20 minutes of hard-rocking bombast we learn the fable of the city of Megadon in the year 2112, where the population is controlled by a cabal of malevolent Priests who reside in the Temples of Syrinx. Doesn’t get much more concept than that!https://www.youtube.com/watch?v=RtdKhwhAcd4    (‘Overture’)Murder of the Universe – King GizzardIn which the Australian psych-rock virtuosos rock hard across three spoken word epics, taking us to the outer reaches of sci-fi and fantasy. Ridiculously it’s one of FIVE albums they recorded in 2017. It would take most other bands five years to put this one album together. Also, any album that contains a piece entitled “The Lord of Lightning vs. Balrog” surely has to make the list of best concept albums?https://youtu.be/Rd3vwwXArMQ (The Lord Of Lightning vs Balrog)Occult Architecture (1&2) – Moon DuoYou want guitar drones, psychedelic keys, pounding krautrock drums, and largely incomprehensible vocals hinting at the changing of the seasons? Then Volume 1 is your album. We get a bit dreamier and floatier on Volume 2. It’s not altogether clear whether this set counts as a concept at all, but it probably deserves its place just for the uber-concept album titles. That and the single-minded dedication to the one-chord piledriving chug of Vol 1.https://youtu.be/VwZG_jY9gFs (Cold Fear)Zen Arcade – Husker Du70 minutes of prime low-fi roar from the Minneapolis trio. This is another one where you’d not necessarily realise there’s a concept involved, but it apparently tracks the path of a teenager leaving home, having rejected his parents or been rejected by them. As usual with these boys, listening to the whole lot in one sitting might be a bit daunting, but then that’s part of the joy of the concept isn’t it?https://www.youtube.com/watch?v=PS7vu0IQhqE   (‘Turn on The News’)S.F. Sorrow – The Pretty ThingsPre-dating ‘Tommy’ this is 60’s psych of the highest order. A song cycle that chronicles the life of protagonist ‘SF Sorrow’ from birth to death. It’s choc full of sonic invention (courtesy of producer Norman Smith), and catchy melodic songs. It has backward effects, mellotrons, fuzz guitar, in fact it encapsulates the entire language of psychedelia on one lp … ace.https://www.youtube.com/watch?v=JgwnC-pEw3k&list=PL363FC4A1F20A8897    (‘SF Sorrow is Born’)Lydia Lunch – MarchesaConceptual and a homage to the writing and stories of the Marquis De Sade who has always been a great inspiration for her. A world of sadism, perversion and pleasure. A literary voyage against a background of dissonant sounds, distorted orchestration and ambient noises composed by Stefano Rossello (Bahntier, Ketvector) and by Lunch herself.https://www.youtube.com/watch?v=ddLXxSm4kp0    (‘Teaser’)