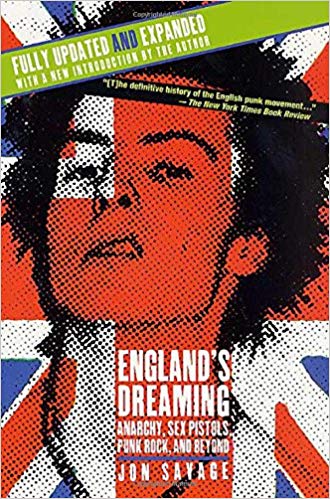 There has been a whole library of books written about punk rock. It’s a long way from amphetamine guitars and wild nights. I guess it’s the ageing process as a generation of snotty, glue sniffing tearaways got bored of drinking cider, pissing in bus shelters and arguing about what is real punk and started to read about it in weighty tomes. Some of us even get to write them, which means that my ‘Oral History of Punk Rock’ cannot feature in this list because, well that would be a bit stupid wouldn’t it….

The key book of the genre. It’s big. It’s pretty comprehensive. It’s academic. But it’s not dry academic, you know in the way that some of those rock professors write in theories and degree level writing without any understanding of the form, sounding quite horrified that they can be so fascinated by something as low and grubby as pop music. Jon Savage is different, he is a great writer, his attention to pop culture detail is legendary and his obvious love of the music leaps off the page. The book is centred around the Sex Pistols and all the punk rock thinking that went around the band and puts them in a very different place than they tend to be dumped these days- Savage sees them as sexy, young assassins, agent provocateurs who changed England for ever and he is right. The book is thrilling and stuffed with details and puts the sex, subversion and style back into the movement and is one of the best books written about any type of music full stop,

The oral history of the New York scene from the mid seventies onwards is documented here in a classic fascinating and seamy ride through the intertwined histories of the Ramones, New York Dolls, CBGBs, Blondie and a whole cast of characters whose lifestyles seem so much more darker and rock n roll than the beautiful naivety of the British scene documented in my own oral history. The American bands now seem closer to the Rolling Stones than punk rock but that makes for a fascinating read and the sordid tales are a great backdrop to the moments of pure inspiration that the New York scene was providing at the time. 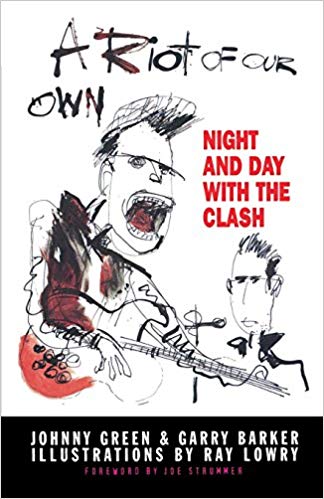 There have been endless books on the Clash that has cemented their long standing reputation as the key band of the period, some like Pat Gilbert’s ‘Passion Is A Fashion’ are great reads that tell the story in absorbing detail but somehow it’s Johnny Green’s memoirs of his days as the band’s tour manager that stand out. The book is a funny and poignant take of life on the road with the band at their late seventies peak that captures the last gang in town mentality of classic rock n roll.

When punk hit America it hit it with the same sort of loose, unhinged and quite violent force that it hit the UK. Henry Rollins was fronting Black Flag -the key frontrunners of hardcore in the early eighties. Their tours were like war, playing to audiences who wanted to drink, fight and fuck as the band deliberately provoked them, constantly redefining what punk was right in front of their faces. The book is written as a brutal tour diary and makes anyone who reads it wince with pain and then want to get on the road no matter how rough it is….

5. Steve Ignorant ‘The Rest Is Propaganda’ and Penny Rimbaud ‘Shiboleth’

Two very different sides of the Crass story that capture the fascinating band perfectly. Steve Ignorant is open and honest in his street level prose and attempts to debunk the myth, his is a working class journey into punk that saw him fronting the most politically coherent band of all time, Penny is questioning and intellectual and immersed in hippie counter culture, both books scream their opposite point of view but are far more full of common ground than they would ever let on.

The second wave of punk is often missed out of the narrative but Ian Glasper has put that right in his series of three books covering the anarchy punk bands, the rehash end of punk and his first one, ‘Burning Britain’ which pinpoints the intense activity that came in the wake of the first assault of punk. A band by band guide to the vitality and tidal wave of bands from beaten up towns that defined the DIY ethic of punk.

7.’The Boy Looked At Johnny’ Tony Parsons and Julie Burchill

I remember this getting passed around at school and everyone being bemused by it’s vitriolic assault on punk. We didn’t realize that this was a punk book and not a book about punk. We were young and we wanted information and what we got was mugged instead. Perfect. These grown ups seemed as cynical as we were! As a guide to what happened the book is hopelessly and laughably out of kilter- Parsons and Burchill were the NME’s idea of hip young gunslingers and signed as their punk writers. They never really liked punk and this book is their assassination of the movement, years later if you get round their lack of musical interest and the fact they dismissed the whole of the punk movement in favour of Tom Robinson then you get the visceral thrill of a snotty, amphetamined assault on the sub culture in perfect sync with the very spirit of the movement. 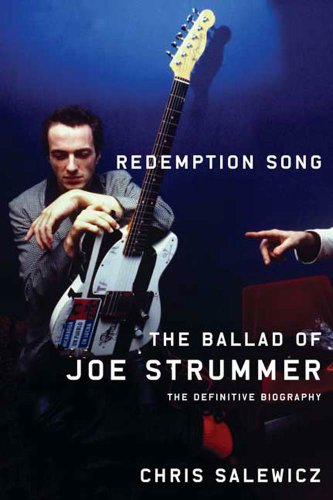 A detailed and exhaustive account of the Clash frontman’s life that deals with all the idiosyncrasies and contradictions inherent in anyone who is a human being trapped in the machine. You come out of the book liking Strummer even more and this exhaustive book really captures the spirit of the man and the times.

9. ‘Dance Of Days- Two Decades Of Punk In The Nation’s Capital’

Mark Anderson and Mark Jenkins. This book is in the list, just for documenting the infernal burning energy of the scene in the American capital. DC hardcore, Washington’s take on punk rock was fierce and intellectual. There is something about American punk and the way it documents itself so thoroughly that we didn’t seem to be able to do as much in the UK- maybe we were too busy doing it to write it all down… The Americans eulogised their own grass roots, creating their own spiky narrative. DC Hardcore was driven by Minor Threat and Dischord Records but that’s just the lid on an amazing scene of activity which this book documents.

Arguably the best autobiography from the punk scene- as contradictory and snarlingly funny as it’s author, El Rotten- who dishes it out to anybody who was within firing range in a deliciously funny book that captures the darkness and hilarity of the music hall gone rancid of punk rock. The other great autobiography from the period is ‘Renegade: The Lives And Tales Of Mark E. Smith’ The Fall frontman’s autobiography is as spitefully funny and darkly dangerous as you would hope. Abrasive, highly intelligent and laugh out loud as you would expect, a perfect document of someone who embodies punk whilst spitting and cursing at its pointless straightjacket.

A detailed band by band account of American Hardcore which was also made into a really good film about the scene.

12. ‘In The Fascist Bathroom’ Greil Marcus.

Earnest and dry as fuck but some good points thrown up and some off the wall links made about punk and art. 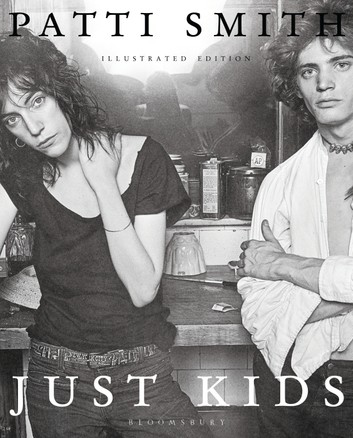 Brilliantly written account of the mid seventies New York creative melting pot that helped provide a template for what punk became, written by the arch priestess of the whole scene- the iconic Patti Smith.

The Stranglers were the leering oddballs of punk, whether they were in or out of the movement is a long lasting pub debate, but for their aggression and non conformist creativity they should be counted in and the subject matter and how they wrote each of their classic songs is detailed here in a way that makes you realise just how damned awkwardly clever they really were…

..a series of interviews with the American post punk bands who took the energy and skewed it into whole new form of music. 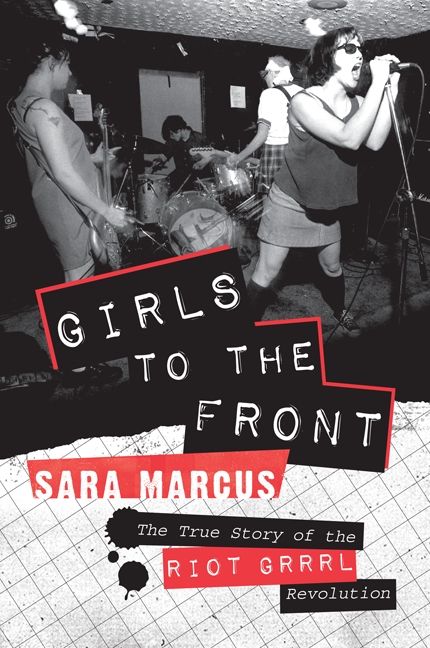 The history of punk has become tragically a boys club, but one of the key ideas of the early scene was the women reinventing their roles in music. American hardcore was even more blokey and this book is a refreshing take on the form from a woman’s point of view.

17. ‘Rip It Up And Start Again’ Simon Reynolds.

Punk brought down the walls of rock n roll and in it’s reconstruction the rules were thrown out of the window. Post punk is an emotive subject but Reynolds captures most of the relevant bands in his book which is a personal account of the form. There are some glaring omissions but this is as good as it gets and as with Simon Reynolds, is brilliantly written.

Ian Mackaye once wrote a very personal song about how he didn’t drink or take drugs and how that didn’t stop him from feeling punk. Somehow this got turned into a religion. A brilliant idea that was corrupted and turned inside out and yet spawned a fiercely creative movement as this book explains.

19. ‘Our Band Could Be Your Life’ Michael Azerrad.

The key book on the American post punk hardcore scene details all it’s key players and their philosophy and their take on punk rock when the musical form became serious in the eighties. Azerrad has an eagle eye for detail and perfectly understands the unleashed energy and its highly intelligent motivation.

Mark Perry’s fanzine was one of the key parts of the first wave of punk. It underlined the DIY ethic – the idea that you could be anything and do anything. It’s scissor and paste, cut up artwork and writing influenced a whole generation of fanzine writers and, by extension, mainstream music and pop culture writers. The complete set of fanzines collected together here underline the power of simple graphics and tell the tale of early UK punk from the frontline as it happened and unfolded. What was once thrown together for speed and cost now looks like a graphic powerhouse.