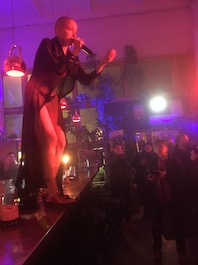 photo of  Siksa by John Robb

Much more than music showcase festival, Tallinn Music Week is a cultural event and an ideas juggernaut that is more than just reflecting the agenda. It is pushing it forward.

In a chaotic and dangerous world with dark forces running amok, it’s refreshing to step into the 21st century with a forward thinking event where music is the core but culture is the key.

This years themes are Brexit and unity and women’s role in music and beyond. They are not just asking questions. They are coming up with solutions.

The music showcase is now at the core of modern music culture and the breaking ground of so many bands and whilst Tallinn Music Week does this perfectly with one of the best and most diverse line  ups of the circuit, it also looks to affect real social and cultural change with an ambitious programme of panels, debates and talks that look at things like the gender pay gap and how to solve many of the current ailments of the world.

It’s ambitious stuff but then why settle for less?

In its tenth year TMW has reinforced its position as the gateway between the fast rising Russian music scene and the trad music bz of the west whilst still being the focus of the great and diverse musics of the Baltic’s and East Europe. This all comes together around the aforementioned panels section which are always forward thinking, embracing the world and it problems and attempting to find solutions in a women led event that is far away from the jaded, gammon, puffy faced, old males that roam the musical earth like tired old dinosaurs.

As ever, band wise, it’s like looking into another future in a different dimension and with the gigs all held in the newly converted old warehouses of the Telliskivi district as well as the converted sock factory that is now Tallinn’s plush and beautiful art school creating a new backdrop to our aural nighttime adventures.

As ever with nearly 200 bands playing a diverse range of music from trad folk to metal to warped post indie and electronica and beyond it’s impossible to see everything but here is a top ten in no particular order but all worth digging deeper into.

Not sure about you but I get really bored of people claiming that modern music doesn’t push any boundaries. That its all been done before, blah blah blah. Siksa dispel this cobweb notion with a confrontational and captivating set that throws question marks around the room as they confront everything.

Siksa are a blowtorch of anger and a wild, no holds barred, theatrical sensuality.  They are a bouncing bomb of sexual tension, a post #metoo defiance and reclaiming of female power whilst dealing a powerful Amazonian feminism that is a visceral clarion call challenge to anyone in the room male or female. One of them is a skinny male dressed in space pixie clothes. He plays a fuzzed out bass for an hour working his way around gonzoid and terrifying blues scales.

Meanwhile, the singer, is the perfect anti star.

She is a stunning charismatic presence who uses the whole room to deliver her poetic, pissed off sermon about shit boyfriends, the overbearing weight off male stupidity and the fucked up Trumpiness of everything with all manner of righteous anger whilst dressed sparsely. This is no mere rant though but a brilliantly thought out display delivered by someone who knows how to use her body and her eyes theatrically and her rich and twisted singing voice perfectly to make her point and hold the audience in the palm of her hand no matter how extreme the gig is.

We saw this Japanese duo last year at the Focus Wales event in Wrexham. That night, like now, they blew the venue apart with their stunning sonic assault. With a polyrhythmic rush the bass and drums combination somehow manages to work out every rhythm and every stop start idea possible in a post rock rush that is jagged and brimful of energy and ideas. Their combination is loud and thrilling but somehow also nuanced and clever and packed with detail and a myriad of bass sounds from the spaceship pile of pedals on the stage. This impatient collection of brilliant bass textures switches sounds and moods and locks in with the frankly, phenomenal drumming that defies everything with its complex frenzy of rhythms that somehow still manager to hook and a four to the floor kick drum to make this sonic skree easy to dance to.

Normally this kind of music is for me and the 20 freaks to nod our heads to in deep appreciation but somehow Moja have found a way to connect with the whole audience who are converted into a joyous mass by their rush of sound.

Shrouded in mystery and a brilliant defiance of any notion of career, Estonian legends Zahir have somehow managed to release their second album in 25 years and it’s a dark, brooding, bass driven monolithic supernaut of post punk genius with brilliant song titles like ‘Nice Parking, Asshole’

Live they go one step further and their avalanche of addictive noise is like a powerful and hypnotic take on Swans, Jesus Lizars and Killing Joke that is a move further away from their roots in the impatient garage rock of the Cramps and the Oblivions that inspired them when they started.

Somehow, after all this time, they sound very much of this moment and their rhythmic assault and huge cavernous sound swamp envelops you and is a reminder of just how potent and powerful this form of music is in the right hands. Stunning gig.

At that time she would play on her own with a violin and play these atmospheric pieces of violin layered up with a loop pedal to create an other world wonder to get lost in whilst intermittently telling stories of the deep dark frost of her rural Estonia hinterland where she grew up.

For her current project she has teamed up with electronic musician Ruum who has added digital backdrops to these esoteric worlds and it works brilliantly as a combination between the two disciplines. Ruum’s slip sliding beats, techno drones and atmospheres perfectly entwine with the undergrowth of Maarja’s pieces and it’s a wonderful improvised symbiosis that enthrals the packed hall.

In Tallinn we always need our dose of melancholic, damp east European mysticism and this year it comes from the wonderful and enchanting Hekla. One woman and a theremin create a spellbinding set off atmospheres and layers of sound that sometimes resemble moody cellos or beautiful choral pieces. It’s a startling, sparse and textural music that easily captures the beauty and emotional power of an Estonian choir.

With her subtle hand movement controlling the Theremin’s mystical vibrations, Hekla is creating the same sort of minimal soundscapes and dark electronica that captivate and move you and whilst taking you into the deep forest of deceptively gentle sound whilst massaging and manipulating your moods.

The Swedish band deliver a dark drone machine like flow of songs that hint at the stadium industrial of Garbage but are exploring a deeper and more impassioned, industrial tinged, almost shoe gaze rush. This is a dark yet saccharine concoction of driving, propulsive rhythms and perfectly judged noise that makes for a very clear manifesto of incisive sound.

I’m rushing through the Tallinn streets on a mission to catch, KnightKnights – this brilliant Russian band who I last saw at Moscow Music Week. Their bass and drum combo explored the sonic space and potential of such a stripped down affair perfectly and their gig was a real highlight at the Moscow event. An event which was already on a high as it freeze framed the much heralded New Wave of Russia music. Using an array of pedals the duo twist the bass into new shapes from psychedelic trip outs to stoner rock grooves to harsh and impatient post punk shrapnel that allied to the powerhouse drumming makes for a great sound.

No wonder I’m sprinting along the old railway tracks of the Telliskivi distiercy hoping to catch the band. When I finally burst into the packed room, though, they are hitting the climactic sonic skree of their set ending song and although it sounds wonderful, it means that I have missed another dose of this genius band…

The Hall is an old warehouse beyond the edge of the Tallinn city centre which has been converted into a pulsating and atmospheric huge techno space. It’s a warren of smaller rooms and distinct vibes but its aching, large, upstairs room is perfect for the sparse and dark electronic pulse of Brartri.

The Czech electronic duo of keyboard and decks dealing out electronic samples with sound of vintage synthesizers and electronic drum machines facing the busy drummer create that kind of perfect gloom-techno or electronic darkscapes that are so addictive.

There is something so good about the digital melancholia delivered by keyboards with their mood driven washes and stark tension that, when combined with the rhythmic pulse of a flesh and bone drummer, makes for film score and almost soundtrack darkness.

From St Petersburg in Russia, Super Collection Orchestra are the latest hotly tipped band to emerge from the effervescent and creative Russian music scene. They are impatient with their own brilliance. Every song is like a cosmos of ideas. This is a world where prime time Pink Floyd collides with seventies art rock, techno electronica and dark industrial -0 there is so much going ion here that it is actually impossible to pun them down. Now that Shortparis and Lucidvox are out there touring and making a grand impression at Euro festivals it’s time to add the next generation of groups and the band who combine electronics with guitars and come armed with an and dark mystery laced sound that pulls you into its throbbing core.

The legendary Estonian crew, started out as an anarcho-punk squad with fierce “songs” that usually lasted under one minute.  During the past few albums they’re sound has evolved immensely – there are shades of blues, postpunk, even jazz.  The band know how to create a riotous righteous racket and their potpourri of decades of rebel music cranked the party to the max. Last year we reviewed a documentary on the band leader Freddy titled ‘More Than Life’ that perfectly captured his dysfunctional, alcohol stained existence that would strike a nerve with anyone who has lived this dissolute punk rock life.  Freddy is probably one of the last “authentic rockstars” who possesses a Barthes´ “the grain of the voice”…

The band are, of course, a celebration and sometimes you need the blowtorch of primal punk music to scorch your mind and reinvigorate your soul.