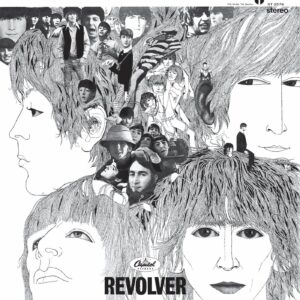 This is my Number 1 album of all time and again; it’s a coming together of stuff. For a start, it’s got 14 really short sharp tracks on it. It’s got a brilliant opening track in “Taxman” and a brilliant closing track in “Tomorrow Never Knows” – so a fantastic top and tail to the album and it’s just so varied. Paul McCartney’s influences are Motown on “Got to Get You into My Life” and then you’ve got the Indian influence and all The Byrds influence was in there and all the things they were listening to were coming back out through those records. It’s just a brilliant collection of pop stuff and really well done music. It was brilliantly played with the band performing brilliantly. The technology that they recorded on was so famous, the big desks, the red channels – they called them ‘the red desk’ – the microphones and everything about it was fascinating, And it’s a fantastically well-made record. It’s a real all time classic album. I’ve seen it loads as people’s all-time favourite number 1 record and it’s mine. It’s just a perfect coming together. It’s quite lo-fi in its sound but it’s the Beatles at their absolute peak – the perfect pop album.

And there you have it – Paul Draper’s Top 10 albums of all time – a great collection of records including some well-known influences and a few surprises. You can tell from his fascination with how a record sounds, that Paul is a proper producer. It will be interesting to hear if any of these records weave their way into his forthcoming solo album. For more on “Spooky Action”, look out for an interview with Paul Draper in the Louder Than War magazine, due out later this year!

More work by Martin Leay on Louder Than War can be found here.