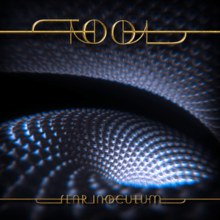 9/10 for first album for 13 years for post genre genius band who dark and powerful visions touch the mind and the soul.

13 years since their last album, 10 000 Days, Tool have returned out of the ether with a powerful, brooding work that pushes the musical envelope. In a typically highly original piece of post genre music the band have created a captivating album that is number one over the world on their own creative terms.

A visceral collection of hypnotic dark songs that combine drones, electronica, psychedelic prog with the dynamics of rock into a brave new whole, Tool have created an album that drips emotion and a deep passionate intelligence that is almost the opposite to the dumbed down stupidity of these times we are stuck with.

James Maynard Keenan’s vocals are a real key to the album. His vocal lines recorded over the band’s instrumental pieces feature his honey rich yearning croon that pull you deep into his eccentric and dark vision. His singing style on the album is closer, in some respects, to his other project A Perfect Circle. They float above the ether, languid and yet full of dark vistas and an even darker energy.

This is powerless apocalyptic stuff, driven by some stunning and powerfully rhythmic bass playing and stunning drumming making the kind of music where you can close you eyes and imagine a film playing itself to its 3D soundtrack.

They are on their own trip and each label they are saddled with slips and slithers off their backs. Nothing can pin them down. They are utterly unique and their multi styles and restless creative commitment to their own emotional and creative integrity leaves them oddly wide open to fans of all styles of music. They can still deliver the heavy but they can stretch out and play with the languid almost eastern scales until they are ready for the high decibel apocalypse now explosions in the sonic sky.

Beautifully they have become one of the biggest groups in the world whilst operating on their own agenda and could even one day get played on the BBC or embraced by the mainstream media like the Guardian – barren media landscapes where rock is something to be terrified of!