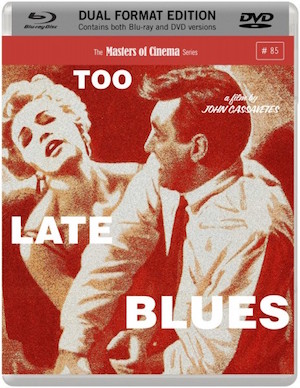 Too Late Blues, directed by John Cassavetes, is the story of a jazz musician’s relationship between both his fellow band members and his love interest, Jess. It’s soon to be released as part of Eureka’s peerless “Masters of Cinema” series. Ian Johnston’s review is below.

In his New Biographical Dictionary of Film tome, author / critic David Thomson curtly dismisses actor / director John Cassavetes’ second 1961 picture, his first Hollywood studio film, Too Late Blues, as “atrocious.” Cassavetes frequently expressed his disapproval of the picture, sighting numerous reasons why the movie failed artistically and at the box office, until his death in 1989. The actor / director variously asserted that he did not have enough time to hone the script (co-written with Richard Carr, who worked on Cassavetes popular Crime Jazz detective television show Johnny Staccato), the shooting schedule was only four weeks long, the budget he had to work with was very low, he had to shoot in Hollywood rather than New York City and the cast was not what he wanted.

Yet Too Late Blues, though far from a masterwork, is a really fascinating picture, with much to recommend it, amid its all too evident flaws. Too Late Blues is a rarely seen example of Cassavetes’ early work and it is clear how both on and off the screen the picture shaped the course of his entire career as a director, as he moved on from his first dynamic independent film, Shadows (1959). Too Late Blues certainly looks stunning, in this superb Eureka / Masters Of Cinema presentation.

Maintaining artistic integrity while working within a commercial art form, in this case jazz, is the theme of Cassavetes’ highly personal Hollywood picture for Paramount. Pop singer Bobby Darin (of ‘Beyond The Sea’ and ‘Mack The Knife’ fame) gives a revelatory turn as jazz pianist, quintet bandleader and composer John ‘Ghost’ Wakefield. Ghost, despite the urging of his Machiavellian agent Benny Flowers (Everett Chambers) refuses to change his musical vision for the market place. Ghost and the band survive playing small gigs in schools and at charity events. Between engagements, a regular occurrence, they hang around drinking beer at Nick Boboleno’s (Nick Dennis, a featured player in Robert Aldrich’s classic noir, Kiss Me Deadly) pool hall bar.

Rather than trying to find work for his client, and line his own pockets with a percentage of his gross, Benny resolves to break Ghost’s artistic spirit. Benny’s loathing of Ghost is amplified tenfold when the pianist fails in love with fragile but gifted and beautiful singer, Jess Polanski (Stella Stevens, who achieved fame in Jerry Lewis’ 1962 film The Nutty Professor, is the acting highlight of Too Late Blues). Benny, a failed musician who harbors twisted desires for Jess, resolves to destroy them both. Jess becomes part of Ghost’s combo, singing strange lyric-less doodling over a Ghost composition. A record deal is nearly struck then Ghost’s life begins to unravel when he feels his masculinity is publicly humiliated in front of Jess during a bar fight with a racist drunkard Tommy Sheehan (Vincent Edwards, featured in Stanley Kubrick’s classic heist film, The Killing). In turn, Ghost rejects Jess and refuses to record the song he wrote for her, thus sabotaging the band’s record deal with sleazy record company boss, Milt (Val Avery).

Ghost is now set on a downward spiral as he enacts Cassavetes’ own nightmare of ‘selling out’, by allowing Benny to pimp him out to a middle age wealthy jazz loving patron, The Countess (Marilyn Clark).

The film’s defects are obvious, probably the most important being the music. For Cassavetes’ first independent film, the director had the great jazz bassist Charles Mingus compose the unforgettable score. For Too Late Blues, a picture that in the ignoble Hollywood tradition focuses upon a band of white musicians rather than African-Americans, he was assigned the acclaimed film composer David Raksin. In order for the dilemma of Ghost’s choice between artistic freedom and commercial drudgery to have maximum impact, his music should have been left field, hard bop New York jazz, as apposed to Raksin’s weird, Esquivel inspired easy listening score. Raksin did have experience as a jazz musician, used excellent jazz musicians on Too Late Blues (including drummer Shelly Manne, trumpeter Benny Carter and Red Mitchell on bass) and wrote great scores for films such as Laura, The Bad and the Beautiful and The Big Combo. Yet the music feels flat, for reasons that become clear when you read the excerpt from Raksin’s autobiography dealing with his work on Cassavetes’ picture, featured in the superb booklet that comes with this release of Too Late Blues – time, money and making the music able to be mimed by the actors are the major factors. The Hollywood sound stage sets are not credible environments and the strain between Cassavetes’ impulse for improvisation and the demands of a Hollywood picture script frequently appears, upsetting the balance of the film.

Of course, as film critic and scholar David Sterritt notes in his essay on the picture, Cassavetes does make a bold gesture towards saluting African-American jazz at the very start of the movie. A school full of black children are enjoying Ghost’s band when suddenly one child snatches the saxophonist’s saxophone away from him and runs off – reversing the trend of modern jazz of pilfering by white performers.

Cassavetes’ originally wanted Montgomery Clift for the part of Ghost and his own wife, Gena Rowlands, to play Jess, yet the Paramount studio choices of Darin and Stevens, in Cassavetes’ capable hands, pay off handsomely. Stevens in particular is utterly convincing as the brittle singer on the edge of a breakdown and she and the dynamic Darin hold up well in a cast populated with actors who would become Cassavetes’ regulars in his celebrated independent features (Seymour Cassel, Vincent Edwards, Marilyn Clark, Val Avery). The vivacious black and white cinematography by Lionel Lindon, who also worked on Johnny Staccato and with John Frankenheimer, is incredibly rich and atmospheric, adds immeasurably to the allure of Too Late Blues.

Though far from perfect, Too Late Blues is infinitely better than many other Hollywood jazz pictures of the era (including Martin Ritt’s Paris Blues, which opened just before Cassavetes’ film and did feature black performers Duke Ellington, who scored the movie, and Louis Armstrong). Too Late Blues also shows why Cassavetes would only make one more Hollywood picture before striking out on his own as a maverick independent filmmaker. If you are a fan of Cassavetes’ work you really have to see Too Late Blues to witness the commencement of how he developed into becoming one of the godfathers of modern American cinema. With a wonderful high-definition presentation, an insightful video examination of the film by David Cairns and a 52 page booklet featuring 2007 interview with Stella Stevens, this Eureka! Masters of Cinema Duel Format edition is the perfect way to see it.