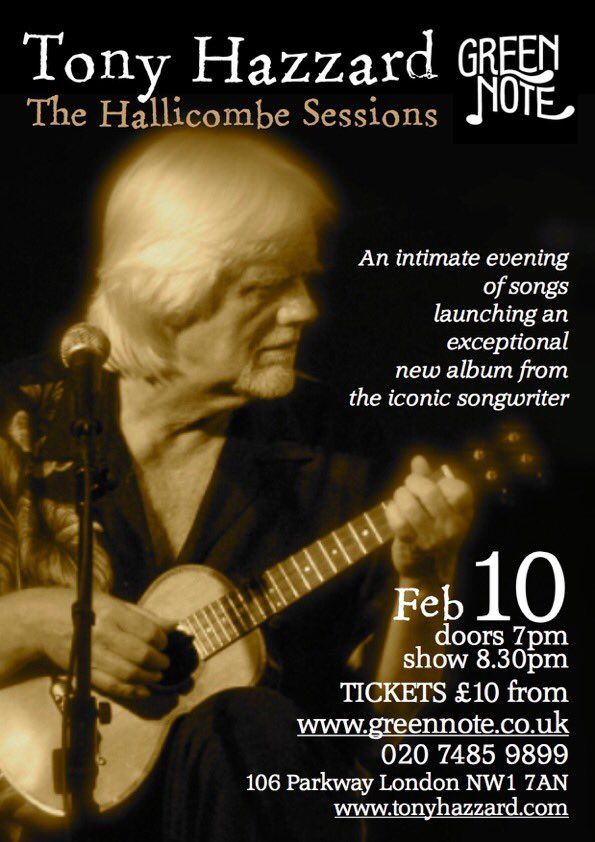 As we were making our way towards The Spread Eagle pub situated just on the other side of the road from The Green Note I asked Tony Hazzard how long ago he had last played in London “Hammersmith opening for Camel in 1976” he replied straight away.  He was at the time promoting the “Hazzard and Barnes” album that would be his last official recording until his 2011 release “Songs From The Lynher”. This evening was the launch party for his new record “The Hallicombe Sessions” recorded at his home in Cornwall with San Sebastian based American musician Matt Harding. Divided in two halves, the evening started with Tony playing songs from his sixties and seventies recordings. Beginning with “Take To The Mountains” originally popularized by singer Richard Barnes in 1970 and that they performed together on their 1976 duo LP, about which Tony told the story of how the sales of the single had been held back by a strike at the Philips manufacturing plant causing it to be an “almost hit”. His first hit “You Won’t be Leaving” for The Herman’s Hermits was followed by “Listen To Me” which gave him the opportunity to recall the recording session of the song by The Hollies at Abbey Road studios and a funny story involving Dave Berry and The Swinging Blues Jeans. “Songs From The Lynher” was represented by “The Venturer” and “Sweet Ruby Ruby Nite-Time” from 1973’s “Was That Alright Then ?” was introduced by Tony recalling the scathing review the Melody Maker gave of the album when it was first released (blow which was softened by the fact that the James Taylor record had suffered the same fate in the same issue).

The evening was full of interesting anecdotes and stories about the people Tony met during his career, “I’m Getting Over You” saw him reminisce about arranger Wally Stott who helped him on the orchestral arrangements of the song and after “Fox On The Run”, he gave us some insight on recording sessions with famed sixties producer Mickie Most. The second part of the evening saw him joined by Matt Harding, the producer of “The Hallicombe Sessions” to play a selection of tracks from the album. The recording process of the new album was totally different from its predecessor “Songs From The Lynher” which although recorded entirely by Tony at his home studio was a very produced and arranged effort. “The Hallicombe Sessions” is a stark and naked record where Matt has pushed Tony to rely only on his songwriting (and his life experience) to come up with a great piece of work (more info to come on their musical partnership in an interview that will be online in the next couple of weeks). “Spice Trader”, an eastern sounding folk song where Matt provided the bass notes on a beautiful Gibson jumbo acoustic is probably one of the best tracks of the new opus. The songs are reflective, “Angela Finkleman’s Eyes” sees Tony recount his first love and on “Seventy, Not Out” he shares his views on reaching the big 7-0 (and manages to include one saucy line in the process). “I’ll Be Still In Love With You” is a very affecting song about growing old and loving each other. Matt far from overshadowing Tony just adds a subtle vocal here, a guitar line there, keeping to his idea that these songs need a simple presentation.

Tony will be playing at The Folkhouse in Bristol on Sunday the 28th of February. Tickets available here.