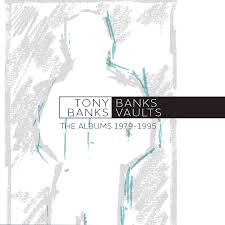 Cherry Red come up trumps with a thorough box set that gathers the bulk of the solo output of Genesis keyboard man Tony Banks.

Anthony George Banks is an oft-quoted major player when it comes to Prog Rock keyboard giants. Not as flamboyant as Emerson or Wakeman yet the one figure who has remained a constant in the Genesis story and who, for many, is the key member of the groundbreaking band.

Like many before and since, the ‘solo’ outlet always proved a strong pull and 1979’s A Curious Feeling saw Banks (and Mike Rutherford) given a break from the Genesis machine while Phil tried to sort personal issues, to explore that very avenue. With hindsight, it’s perhaps the one album that fans will return to and pick as the gem in his solo output. One that placed an emphasis on the sort of rich keyboard textures he’s employed on Genesis’ ‘’’and then there were three… the year previously. In particular, The Waters Of Lethe instrumental combined his verging on classical piano playing with grand swooping banks of synth.  As a songwriter, he’d displayed his chops with the day job, but the title track and the lead single For A While were both as impressive as he’d produced while Somebody Else’s Dream was a real stomping effort and perhaps the pick for singer Kim Beacon.  The instrumental section that makes up the second half of You is filled with uplifting latter-day Genesis styled pomp and although Genesis fans in the main enjoyed the album although the lack of commercial success or critical acclaim led to Banks not sticking and trying to twist the formula.

The Fugitive that came four years later, in hindsight is more of a period piece. Rooted in many of the Eighties synth/keyboard and drum sounds, Banks also took on the vocal duties (mirroring Rutherford on Acting Very Strange). “A strong instrumental album but stark” is his own pretty fair judgement even with some contributions for Genesis live guitarist Daryl Stuermer. While choosing This Is Love as a single can’t have done too much to help matters, a couple of quirky instrumentals in Charm and Thirty Three’s were the pick and also gave an indication of the sort of sounds he would bring to Genesis albums of the time. Despite the attempt to rock things up a bit with At The Edge Of Night, closing track, Moving Under would have been interesting given the chance to develop in the three-man Genesis format. You can see the end easily develop into a prolonged instrumental that Mike and Phil might have got their teeth into. As a vocalist though, the best that could be said was that at least Banks gave it a go.

So where next? The appeal of writing film soundtracks led to The Wicked Lady – Michael Winner’s tongue in cheek remake of the highway robbery Margaret Lockwood classic, titillated up a bit and with a Tony Banks orchestrated soundtrack. The album includes some relatively stripped back versions of some of the themes, but may have been more memorable for its topless whip fight scene… And some of us went to simply appreciate the Banks soundtrack (same of Deathwish II another of Winners, music of course by Jimmy Page). Further dabbles in the soundtrack pool  with Quicksilver and Lorca And The Outlaws included his first of a couple of forays with Fish – then of Marillion – of which many saw as a something of a desperate measure in jumping into bed (not literally of course) with someone whose initial appeal lay strictly in the Genesis soundalike  field. Shortcut To Somewhere isn’t a bad track though and at least Fish sounds up for the challenge despite a few self consciously clichéd lines.  The Soundtracks collection makes up the fourth disc of the set while plans for world domination a la Uncle Phil were made.

The plan led to Banks continuing to toy with trying to find a breakthrough now that his pal Phil was an international solo star, Banks followed the Rutherford template of setting himself up as part of a band. Bankstatement became the band brand built on a sort of Curious Feeling/Fugitive core as Banks joined forces with Alistair Gordon and Jayney Klimek and introduced something a little edgier with Steve Hillage playing the guitar (not that you’d really notice much aside from his jagged intro to A House Needs A Roof) ) and coproducing but even his reputation couldn’t push Banks towards the glare of the spotlight.

By the time we hit Still, the idea of using different singers makes it interesting to hear the collaborations with Fish to get a hint of how the big man might have sounded with Genesis. Another Murder Of A Day on the darker side and no doubting that Fish gives the chance of playing with one of his heroes his best shot. Musically Banks uses the opportunity to allow himself some head on an extended piece that turned out to be the most successful work not only on the album but one that would easily make a ‘best of Tony Banks’ shortlist. The Nik Kershaw songs inevitably sound like Nik Kershaw songs – his vocal a more refined version of Banks’ own and by now you get the impression that although these are nice songs, Banks was clutching at straws somewhat in perhaps not knowing how best to present them. It’s surprising that the idea hadn’t occurred that with a tweak some of the electro-synth boppiness could easily be Eurovision fodder if that’s not too insulting! The different vocalists come with varying degrees of success and not even Stuermer, Pino Palladino or engineer Nick Davis can provide enough magic to an album that in hindsight and with his legacy, seems to be lacking some instrumental clout.

Strictly Inc was Bank’s 1995 attempt at another band project – remaining incognito and hiding his name is the idea behind any preconceptions that might tar his work. Again, dipping his hand into the lucky dip of singers and coming up with Wang Chung’s Jack Hues, there’s a nice nod to the first Genesis album that contains The Serpent – here Banks comes out with The Serpent Said – but again the songs are almost instantly recognisable by now as solo Tony Banks and not really challenging the Collins/Rutherford solo successes. At least he threw caution to the wind with the An Island In The Darkness opus that combines Banks’ aptitude for classical composition and merging with the rock and pop field. A piece that weaves and winds through various piano-based passages in the best traditions of the likes of One For The Vines, it might have been a Genesis classic in the making if he’d not held it over for Strictly Inc.

Looking at the bigger picture of the Genesis members solo careers, the immediate and unexpected success of the Collins solo work (much to Bank’s annoyance – you wonder how serious to take the  “we wanted him to do well, not that well” comment) and eventually with Rutherford finding a more appealing MOR niche with his Mike And The Mechanics group venture buoyed by the, all too elusive for Banks, high profile hit single. Banks was never going to be a pop star, maybe a songwriter which harked back to the ambitions of the fledgeling Genesis, but more as a composer as he found with the 2004 classical album Seven, 2012’ Six Pieces For Orchestra and 2018’s Five saw him at his most comfortable.

A separate DVD comes with the set that gathers all the promotional videos over the sixteen-year period. Never very comfortable in the video arena (or with live albums for that matter – his nonchalance over the recent reissue of the landmark Seconds Out album quite difficult to comprehend), it’s fair to say the phrase ‘fish out of water’ springs to mind watching Tony make his way awkwardly lip-syncing through the This Is Love promo while  he’s filmed sporting the famous green satin Wind & Wuthering tour jacket in For A While although the Butch & Sundance flavour of Shortcut To Somewhere with Fish at least they seem to be having some soft-focused fun.

So Mr B seems to have accepted his lot and according to a recent PROG magazine interview he’s keeping busy with some golf, tennis and gardening – entertaining himself – and despite a patchy solo career, there’s no doubt his contribution and influence in the progressive field.

Watch the video of For A While from the A Curious Feeling album: