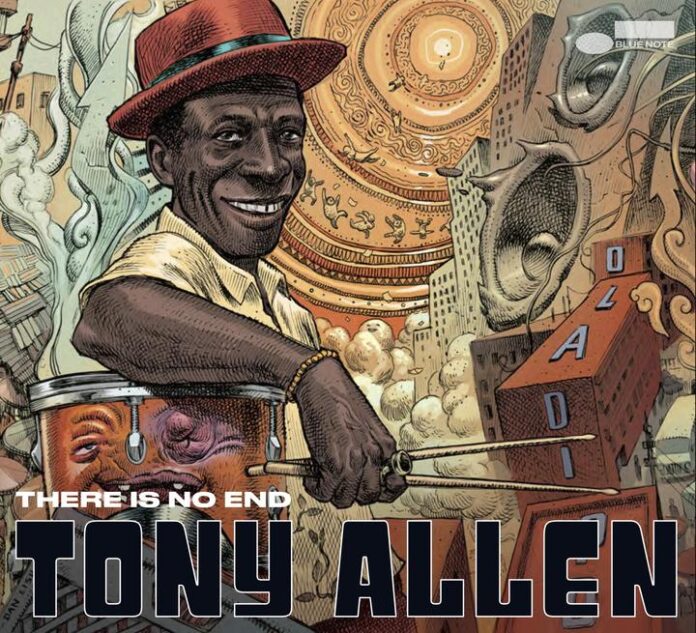 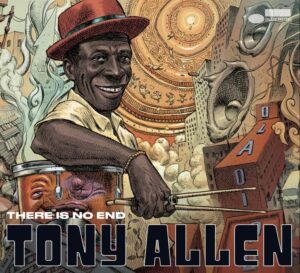 Tony Allen: There Is No End

Twelve months ago, we lost the greatest drummer of all time. There Is No End is a remarkable way to say goodbye to Tony Allen. Quite simply, as a legacy, it could not be surpassed. Louder Than War’s Gordon Rutherford reviews.

“I don’t know when to stop, I’m just exploring this musical field. Because there’s no end.” – Tony Allen

Anyone who saw Tony Allen drumming live can count themselves very fortunate indeed. I am one of the lucky ones, having seen him perform up close with The Good, The Bad & The Queen on two separate occasions. It was special. You were always conscious that you were in the presence of greatness. After all, this was a man who, along with Fela Kuti, invented Afro-beat. As you can imagine, he was an utterly captivating watch. Sitting there with his dark glasses and pork pie hat, the epitome of cool, he made it all look utterly effortless, as though the sticks and the kit were simply an extension of him. His demeanour belied the complexity of those rhythmic patterns he created so brilliantly.

Sadly, on 30th April last year, Tony passed away and the world lost the man described by Brian Eno as “perhaps the best drummer in the world”. In terms of his incredible back catalogue of music, he has left an incredible legacy. But he had one more pearl to bequeath us. I’m always a little wary of posthumous releases. Over the years, there have been far too many cash-ins that do no one any favours bar the bean counters. I shouldn’t have worried. Released on the iconic Blue Note Records, on the first anniversary of Tony’s passing, There Is No End is a wholly fitting release.

Let’s begin with the track that is already out in the wild. Cosmosis is an out-and-out banger, unquestionably one of the standout tracks on this incredible album. Hell, it’s quite possibly the best track released by anyone this year (so far). It’s the one song on the album that was effectively recorded ‘live’, with all the instruments playing together. Allen, along with Damon Albarn and Skepta, had just finished recording How Far for last year’s Gorillaz album, Song Machine, when they were joined in the studio by the legendary Nigerian poet and author, Ben Okri. Despite the lateness of the hour, they got back to work and, as they had done so many times before, they weaved Allen’s African groove with Albarn’s western pop sensibilities. Over this, Okri delivered a series of powerful spoken word passages, some from his poem, The Present Moment, others the product of the vibe in the studio at that time. Skepta augmented the track with his red-hot rapping. It all came together to create an absolute tour de force.

In many ways, Cosmosis represents the closure of one particular chapter in the Tony Allen story: the one with Damon Albarn. But when Allen embarked upon this ambitious and exciting project, his objective was not to re-tread old paths. That’s not what his illustrious career was built upon. Instead, this was all about creating something new, fresh and quite unique. He envisaged a project where he would take his characteristic rhythms to the four corners of the globe and collaborate with the very best young rappers and vocalists. Because when it came to breaking down boundaries, whether cultural, geographic or of genre, Tony Allen was nonpareil. He had an aspiration to amplify the voices of these singers, these inner-city poets, and to make them heard above the cacophony of global turmoil. As Okri explains, Allen’s vision was to “lay out this universe in which dreams can come forth”. And that, in a nutshell, is the absolute essence of There Is No End.

Album producer Vincent Taeger explains that in laying the foundations for this album, Allen would literally jam on his drums whilst listening to iconic hip-hop tunes on his headphones. Not to mimic the beats, but rather to interpret them in his own inimitable way, fusing American hip-hop grooves with West African rhythms. In doing so, he crafted a rich tapestry, onto which the other artists are invited to overlay their own special gift. That was the plan, however, as is oft her want, fate made a cruel intervention. Tragically, Tony Allen passed before many of the rappers had the chance to record. Crucially, thankfully, the universe he had envisioned had been completed. His magical textual landscape had been created, ready for the next generation to pick up the baton. And they did. The end product is quite dazzling.

Of course, we all know that the sun is a fixed point in the universe, but let’s take a trip down memory lane, back to those cheery, merry medieval times when people assumed that the sun was the one doing all the hard work by orbiting the earth. To help us talk about the music on There Is No End, let us track the path of that glorious golden orb and head west. We take a short hop across the pond to New York City. There, we find Tsunami who brings his deep rap skills to Très Magnifique. His words are brutal, as he raps darkly about the metropolitan reality. It is ominous and portentous, evocative of any big city late at night. For the following track, we stay on the east coast, moving southwest to Maryland. Hurt Your Soul, featuring Nate Bone, comes from a different location, but it’s the same feel. It’s a track built upon Allen’s trademark snare and hi-hat filigree and, like the preceding track, it has an edgy, inner-city danger to it.

Moving inland to Detroit, we get a different feel. The Motor City’s role in the evolution of electronic house music is well documented and Coonta Kinte, featuring Zelooperz, brings that vibe in spades. The track preceding that is one of the album’s highlights. We find ourselves on the west coast now, in Los Angeles, fittingly the city where Allen cut his first American recordings with Fela Kuti. Rooted in the deepest of funk grooves, atypical of that west coast influence, Rich Black is built upon a beat that just won’t give up and the catchiest of synth melodies. Koreatown Oddity raps with utter bravado on top and Laetitia ‘Jaeguar’ Bourgeois provides rich vocal tones on the chorus.

There are a couple of other stops stateside in addition to those referenced above. Several different locations spread across one vast country – all bringing their own unique local dimension to Allen’s canvas. However, at the risk of being labelled parochial, the very best tracks on this outstanding collection are the ones that emerge from these shores. One In A Million is vying with Cosmosis for the title of this album’s finest moment. Allen’s African soaked grooves beat out an intense pattern, a funk-rich beat that serves as the perfect backdrop for the album’s finest vocal performance. West London rapper Lava La Rue is appropriately named as she scorches a path through this track. It’s followed by Stumbling Down; another dazzling track with its roots in West London (with a sprinkle of Johannesburg and Gabarone). Multiple Aussie Grammy winner, Sampa The Great, takes the mic for this tune that just oozes the sound of latter-day London. It’s a little glitchy and a little dubby and extremely infectious. The third track featuring a capital influence is the super-cool Mau Mau, featuring London-based, Kenyan vocalist, Nah Eeto. It’s a veritable feast that combines Afro-beat, electronics and hip-hop. It sashays out of the speakers and absolutely forces you to sway to that beat.

It goes without saying that massive kudos are due to the incredible production skills of Vincent Taeger and Vincent Taurelle, who have ultimately crafted all of these precious gems into the one gloriously dazzling piece of jewellery. This is precisely the kind of concept that, in the wrong hands, could easily backfire. But they get it just right and have produced an album that has incredible depth and variety, whilst not sounding like someone’s Spotify Recommends playlist. At no point does it sound formulaic or algorithmic. Nor is it messy and disjointed, despite the plethora of artists and geographies. Instead, it sounds fluid, organic and totally conjoined and that’s an incredible achievement, one that is testament to Allen’s vision and beats and the skill and responsiveness of the two Vincents.

Holistically, There Is No End is like the Kellogg’s variety pack that you used to moan the face off your Mum to get every time you went to the supermarket. It takes a whole gamut of flavours and textures and combines them into one beautifully attractive package. The difference is that there will be no individual components of There Is No End discarded to the darkest corner of the kitchen cupboard, never to be consumed. There is no filler here, nothing that will be forgotten about until well past its sell-by date.

Tony Allen has left an incredible and fitting legacy with There Is No End. It is an album that is a musical triumph, one that is groundbreaking and thrilling. Furthermore, it will do what Tony Allen’s work has been doing for decades – influence and inspire the musicians of tomorrow. The beat goes on. I play yours, you play mine. Quite literally, there is no end.