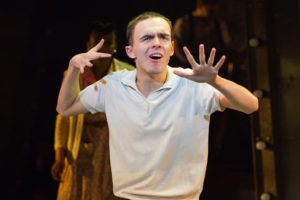 The really startling thing about this thrilling production of a rock opera about a ‘deaf, dumb and blind kid who plays a mean pinball’ is that it has taken until 2017 to be performed by a mixed cast of disabled and non-disabled actors. Paul Clarke reports back for Louder Than War.

There is something uniquely powerful for The Who fans to see the theatrical version of a genuinely ground breaking album with a deaf actor in the lead role as William Grint’s expressive face and signing adds something new to Pete Townshend’s prophetic words.

In the year Sgt Pepper’s celebrates its 50th birthday it becomes increasingly obvious that Tommy – released two years later – was always the natural successor as where the fab Four couldn’t be bothered to string their songs into a coherent narrative Townshend took that step which works…for the most part.

There is much debate whether Tommy has aged well, but Ramps on the Moon have smartly melded the album, the iconic film and elements of the successful stage show to bring it up to date.

Even now Tommy is an uneven mix of murder, paedophilia, disability issues and a mediation on the merits of following religious leaders which ironically makes it a pretty contemporary piece.

Tommy watches his father murdered before retreating into a catatonic state that sees him sexually abused and bullied before he discovers a talent for pinball as he eventually comes out of his catatonia to lead that a quasi-religion that goes horribly wrong.

No spoilers there as Tommy is so familiar, but Kerry Michael’s bold direction deftly used the cast’s lived experience as they romp through some of the greatest songs ever written. It is no wonder Townshend was so closely involved in this production as he was always an early adopter of technology ,and had an innate understanding of rock theatrics, so the use of signing, audio visual tricks and a flexible metal set fits well with his thinking.

This is one of those shows with a big talented cast where everyone seems energised by the onstage power they are creating, but the ever reliable Gary Robson delivers a suitably creepy Uncle Ernie who ‘fiddles about’ with Tommy .

Max Runham is moving as Tommy’s lost father Captain Walker and the interplay with Grint as they sing and sign ‘see me, feel me’ to each other is just beautiful. Peter Straker was in the original Tommy cast and is a feisty Acid Queen before making the most of a much more downbeat new Townshend song that helps explain why she originally disappeared in act one.

It helps they are knocking out some of best rock songs ever committed to vinyl. Everyone knows Pinball Wizard, but some very clever staging makes it sound fresh as the younger cast members run riot with it. I’m Free is a call to arms to be ourselves and when at the end the cast stand together for Listening To You joyfully chanting ‘listening to you/ I get the music’ it becomes a challenge to free ourselves of being conned by charlatans.

The tight live band do a great job, but they lack the coiled menace of The Who, which is no criticism as who could hope to match the most powerful trio in rock history. If you want to see how Tommy should sound like check out the Who’s confrontational performance of the songs at Woodstock as they deliver a West London middle finger to a bunch of daft hippies looming for a fake enlightenment.

This bright and lively version of Tommy brings it bang up to date especially in a world when disabled people are being sanctioned, a smirking posh idiot poses with a pint of bitter as Europe burns and an orange moron is in the White House. Great art is timeless but sometimes it needs a cast as committed as this one to reveal its relevance.