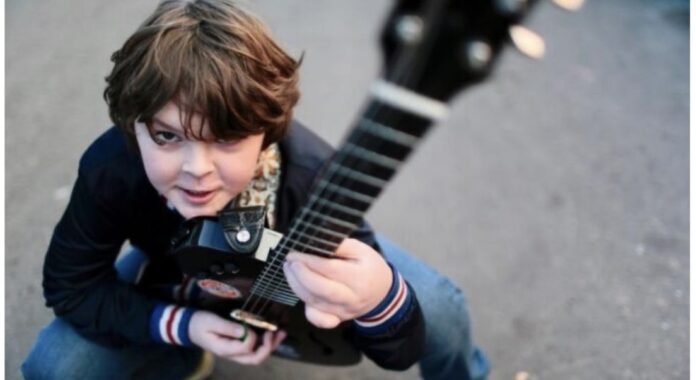 When 8 year-old Tommy Ragen notebook and guitar in hand wrote and composed a compelling rock ballad called “Chasing” little did he know that a few years later Paramount ViacomCBS would be releasing a captivating movie inspired by his song. The young Broadway star of “School of Rock” also plays a lead role as “Oak ” in the dramedy “Might Oak” also starring Janel Parrish, Alexa PenaVega, Carlos PenaVega, Gianna Harris, Rodney Hicks, Julia Michael, and Levi Dylan, (grandson of Bob Dylan). 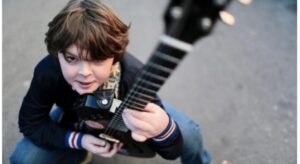 The Brookwell/McNamara production tells the story of a band manager Gina, who struggles after losing her lead singer and brother in a fatal car accident while traveling to a gig. A decade later Gina meets a 10-year-old music prodigy named Oak who seems to possess the same qualities as her late brother. Invigorated, Gina starts to pull her life back together as she tries to reunite the band with Oak as the new front man.

I spoke with 12 year-old Tommy regarding the film as well as his music career. He was super professional with a touch of child-like innocence and enchantment….

Louder Than War…How did you become involved with the movie “Mighty Oak?”

My music was already being used for “Mighty Oak” so I auditioned in front of the director and I got the part.

How did the producer find your music?

It’s kind of a weird story. I was at a charity event called “Natural High” and I was playing an original song called “Chasing.’ That is pretty much where it all started. “Chasing” became kind of what the movie was based on. Some people saw it at the Gala.

So your song “Chasing” pretty much inspired the story of the film?

How old were you when you started playing guitar? What inspired you to want to learn the guitar?

It was six years ago when I was six years old. I was at a concert and my dad met this guy who was sitting next to him. He had a son who was also there who played music and I was inspired by him. My sister started taking guitar lessons then I wanted to take them. That’s how it happened.

You’ve also been on Broadway?

Which do you prefer, the silver screen or Broadway?

I’ve only had one experience with both. I think that I’m turning towards movies more probably.

Do you have a hero, someone who has influenced you?

Yeah. One person who really influences me musically is Juice Wrld. He really inspired me and helped me develop my style now. Hip hop is my favorite genre.

Do you write hip hop?

I have written rap. My newer songs are rap but even if they aren’t I usually incorporate elements of hip hop into my songs. Not for the movie though. I wrote those songs when I was like 8 or 9 so I wasn’t writing any R&B yet.

What do you hope your future brings? Do you want to stay in the entertainment industry?

As a kid, how has Fame affected your life?

I think there are a lot of huge sacrifices that you have to make. You were definitely giving up some of your childhood. You have to create a balance. To be honest I am still trying to work out that balance. I think that it can be very tiring but if you make it fun it’s worth it. It fun if you are working with people that you really enjoy working with. I mostly work with adults and I enjoy hanging out with adults. At the same time they are kind of like kids because they are in their early twenty’s. They are really sweet and light-hearted. They know how to okay music really well. So jamming and recording with those people really helps make it stay fun and makes it feel like you’re hanging out with your friends.

Did you have a favorite part in the movie?

I think all of it was really fun but I think my favorite part was in between the scenes. Everyone there was so incredible. They were really nice and supportive and they were really sweet people. When you meet them, they don’t act like they are famous. Which is really great. All those people are really humble, and I really appreciate that and I really look up to them.

What was it like working with Bob Dylan’s grandson?

It was awesome. Levi has a very cool personality. We were kind of in different parts of the movie, so we didn’t have too many scenes together here. I pretty much played the reincarnated him. Not actually reincarnated, but it’s up to you to believe if it was a reincarnation.

You probably already have lots of fans. If you could say anything to them what would that be?

I don’t like to think of people who enjoy my music as fans. I think if they want to do music or acting, they should just stay with it and try to work through the challenges, and not give up just because there’s a challenge. It’s going to be with it in the end.

What was your biggest challenge doing the movie?

To be honest, there wasn’t really any challenge because everyone there was really nice and everything went really smoothly. It’s not just because I’m trying to be positive and not say anything that’s going to start drama. I think it was just the best first movie that I ever could’ve done and I’m just really grateful to have had that opportunity. Everyone was so professional and everyone was just really nice to me. It was really awesome.

Do you play video games, and which is your favorite?

I do. Minecraft is my favorite.

If you could have me ask you any question on the planet what would that be and how would you answer it?

That’s a hard one….maybe what’s your advice to kids in general while growing up? So my advice to kids about growing up in general is there are always going to be challenges and there is no such thing as everything being perfect. You should try to ignore things that bother you and talk to your parents if you feel like you need help or something. Even if you feel like they’re not on your team just try to talk to them or try to have someone else talk to them. Just try to surround yourself with good people.