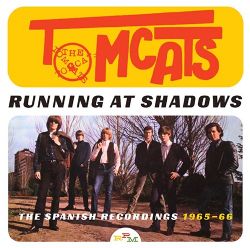 The Tomcats – Running At S

Louder Than War’s Ian Canty reviews the first CD release  of The Tomcats, the band that became Psychedelic legends July.

It’s a fact that we live in very odd times musically – witness the recent and very well received live performances of July, the 60s Psych band that put out one LP in 1967 which sank without trace at the time, but over the years has come to be regarded as a classic of the genre. A remarkable feat given the near half a century time lapse, but not one without precedent in this “everything at once” era. The roots of that band came out of an earlier outfit called the Tomcats who, starved of success in their homeland, hopped across to mainland Europe to try their luck amongst the senoritas….

The Tomcats evolved into July taking the same “Skiffle to Beat to Psychedelia” route of many musicians in the UK of that vintage. Initially inspired by Lonnie Donegan (now there is a crucial figure in the development of UK Rock ’n’ Roll who never ever gets his due credit) they formed in the early 60s as the Dreamers but changed their name when Freddie Garrity appeared on the scene. Led right the way through from that time by Tom Newman (who would later collaborate with Mike Oldfield and even legendary Punk band the Adverts on their second LP “Cast Of Thousands”) and also featuring Peter Cook (no not that one) and Chris Jackson who would all contribute to the July LP many years down the line.

Their history is closely entwined with another Ealing band, neighbourhood rivals the Second Thoughts whose history included drummer Speedy Keen (later on to be in Thunderclap Newman and like Newman had links to the 70s New Wave through producing the Heartbreakers “L.A.M.F.” album). Four Second Thoughts tracks appear here as a bonus, their selections being pretty standard beat recordings, but not bad.

The version of the Tomcats compiled here existed in that time between the first flush of Beat and the eventual tripped out flowering of the hippy era. The term “Freakbeat” has been retrospectively applied to this timeframe, as bands added more sonic experimentation to their previous pared down version of the Blues. The Tomcats wholeheartedly grasped the sound of the time whilst keeping the odd slowie in hand for the dancers.

Like many UK bands in the 60s, after setbacks like their residency at the Beat City club in Oxford Street going down the tubes and a temporary split, they looked further afield for excitement and fame. In the Tomcats case this meant an offer from French singer Teddy Ray, an old fashioned Chanson merchant based in Spain who was looking for an appropriate “bunch of hairies” to update his act.

Thrilled by the reception their Pretty Things-style look and sound received in this part of the continent (here it’s worth pondering that Spain at the time was a Fascist state under Franco, but the Tomcats seem to have got in under the radar) they set the Tomcats back in motion in their own right and issued a series of EPs which make up the bulk of the material collected here.

From their new base they manage to blag their way into being the “de facto” Rolling Stones of Spain and this necessitated the Mick and Keef covers which are dotted liberally throughout this collection. You would never mistake these versions for the originals and they aren’t that dissimilar from the versions hundreds of bands were knocking out all the place at this time (another Ealing band the Eyes did a whole cheapo LP of Stones covers), albeit here with some nice fuzz guitar courtesy of a box made out of an old “Colman’s Mustard” tin!

Much more interesting though are the Tomcats manic take on local hits – “A Tu Vera” tips the Colman’s fuzzer into over-time to yield a Freakbeat marvel and “Pena Penita Pena” gets a similar roughing up to its immense benefit. “Macarenas” borders on some nice Mod Jazz apart from some stinging guitar and midway through “Que Familia Mas Original” (that’s “Shame And Scandal In The Family” to those unfamiliar to the Spanish tongue) the calypso song is sky-rocketed through the stratosphere with some great fuzz.

The band originals though tend towards moody ballads – “Running At Shadows” is probably the pick of the bunch, but they’re all with equipped with charm if a bit naïve at times. They were a band clearly still finding their feet, which would pay off with their next incarnation.

Macca’s perhaps too frequently heard “Yesterday” is given a bit of a flamenco spin which despite some dodgy singing notes makes the soppy old standard listenable and their effort at the Yardbirds great “For You Love” is a decent attempt to put their own stamp on the song. The best is saved for last, their contribution to the film “Operacion Secretaria” (which looks on the small amount of evidence I can find to be somewhat like a Spanish version of one of those later Norman Wisdom films) – as the excellent sleeve-notes state “Two Minds In Tune” does take a bit from “Dirty Water” but it is a barnstorming, blues-wailing, arse-booting effort itself and we’re treated to a version with dialogue from the film as a bonus.

July fans are going to want this but for anyone this is an enjoyable, stand-alone listen without taking into consideration the band’s future triumphs. The Tomcats, despite the odd wobbly vocal and dodgy sound, had some interesting musical ideas and managed to fashion the material they had access to into a potent fuzz-fest.

All words Ian Canty whose author profile is here