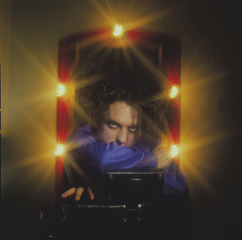 In Between Days. The Cure in photographs 1982 – 2005
by Tom Sheehan. The book comes complete with a foreword by Robert Smith

Tom Sheehan is one of the great post punk photographers – with a catalogue of image that defines so many of his subjects/victims he is one of the photographers that made sense of those times and freeze framed the very perceptions of many of these musicians. his work with Robert Smith and the Cure is iconic and it took someone who as a real character like Tom to get the best out of the band.

This upcoming book tells the story of the photographs and we have four shits exclusively sent to us to show you and comments on each shot for LTW.

The Flood Gallery is proud to announce the second book from the archives of celebrated music photographer, Tom Sheehan. Having worked with The Cure for over 20 sessions across 3 decades, the book offers a stunning photographic journey, shown in chronological order, of one of the most important and successful UK bands of the last 40 years.
The book, featuring a foreword by Robert Smith, includes many photographs never seen before all carefully scanned and retouched to show Tom’s work at its glorious best.

Featuring many previously unseen images, “In Between Days” is divided into three parts focusing on specific phases of their history. Part 1 (1982-84) traces their early travels at home and abroad, also including portraits of Smith’s parallel career in Siouxsie & The Banshees and the side-project The Glove. Part 2 (1985-89) highlights their imperial period through a trio of classic albums The Head On The Door, Kiss Me, Kiss Me and Disintegration, including rare behind the scenes images from the celebrate The Cure in Orange concert film. Finally, Part 3 (1990-2005) collects Sheehan’s latter portraits of Smith and the group as they cement their status as one of the biggest alternative bands in the world, still touring today.

Each section is accompanied by an essay by acclaimed author and music journalist Simon Goddard (Ziggyology).

“In Between Days. The Cure in photographs 1982 – 2005” is a beautiful, strictly limited, Deluxe and Super Deluxe book with 240 pages charting over 20 years in the career of Robert Smith’s legendary group.
The Super Deluxe will be a limited edition of 700 with pearlescent hard slip-case which includes 3 unique photos from Tom’s archives with a bound-in certificate of authenticity signed and numbered by Tom Sheehan himself.
The Deluxe limited edition of 2500 features the 240 pages hardback book, complete with hardcover slipcase.

‘This was the saturday morning before they played at the Elephant Fair in Cornwall . We had been sat in a pub garden when I suggested doing some shots on the way back to the site as I didn’t want festival site shots to be the main images used. We parked up and rattled off a few frames in this corn field.  A few years later the (Melody Maker) paper where it ran did a special ‘give away’ on The Cure where Robert captioned some photographs .  If memory serves I recall his caption for this image was … “ Sheehan was in a particularly bad mood that day, he knew I had hey fever and he made me stand in a cornfield” ! 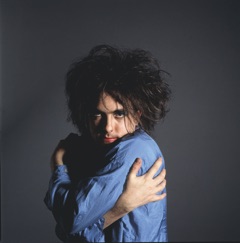 ‘The Cure were doing a photo session for the record company ( why not me !!! ) — the photographer had done his thing , I asked may I do a few shots using his lights . I moved a few things round and came up with a nice series of images.’

‘A friend of mine had just set up a studio in what was once a brewery about one hundred years ago.   I had dome some really nice shots of Robert inform of a roll of colourarma then asked to do some shots in the dressing room on the barber’s chair . He wasn’t too keen , but I love this images of him as I haven’t seen a shot of him like it.’ 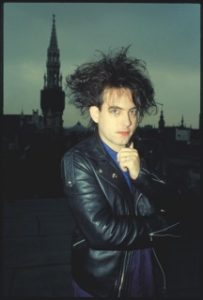 ‘This was late on a Sunday afternoon. I had plans to do some daylight shots on the roof of the hotel. By the time Robert showed up it was twilight , it gets dark quick in November. I wasted no time in rattling off  a few frames before it got dark. This like a lot of the images in the book is probably  been the first time it’s been seen.’