Tom Sheehan is one of the premier UK rock photographers and one of the great post punk photographers – with a catalogue of image that defines so many of his subjects/victims he is one of the photographers that made sense of those times and freeze framed the very perceptions of many of these musicians. His work with Paul Weller and The Jam is iconic and it took someone who as a real character like Tom to get the best out of the band.

Flood Gallery Publishing is proud to announce a new book featuring the work of celebrated music photographer Tom Sheehan. AIM HIGH Paul Weller in photographs from 1978-2015 is a beautiful Deluxe and Super Deluxe book with 240 pages charting the photographic history of the UK music legend.

Tom Sheehan has photographed some of the biggest names in music and with AIM HIGH he is releasing for the very first time a comprehensive collection of his photographic work with Paul Weller. With many never before seen images, this is a unique body of work that shows the brilliant talent of Tom via a fantastic visual journey from the Jam, through the Style Council and the Solo years.

Paul Weller has penned the introduction to the book and says ”I love working with Tommy [..] I can’t believe just how many sessions we have done together and over 5 decades….enjoy the work of a great photographer and man”

The book is arranged in 3 chapters introduced by an essay from music journalist Simon Goddard covering in chronological order The Jam, Style Council and Solo years.

Every photograph has been carefully scanned and re-touched to produce the images in their glorious best and every element of this Deluxe book will be produced to the highest specification.

For us, it has been a pleasure working with Tom over several months to bring this project to the fans. We are all delighted with the final result. It is not often that a photographer has such a long working relationship with such an iconic figure and as result, we are sure all Paul Weller fans will enjoy this wonderful book.

‘They were making ‘All Mod Cons’ Round the corner at RAK studios. This was my second encounter with The Jam in a few months shooting for two different music papers.

Straight off the bat there was no mistaking that Paul was the team leader. He just seemed to loose LEADER ! His sometimes often mistakenly gruff exterior is merely a sign of someone that takes what he does very seriously. It took a few more encounters with him to realise he is very serious about his art/craft as a musician and songwriter.’ 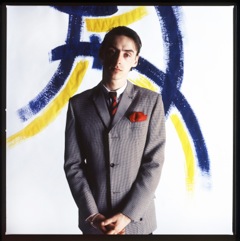 ‘Paul , like many of our great British musicians that take their job seriously. Like Oasis , Radiohead etc …. Paul Weller has never been late for a session with me in all our thirty five years of snapping. He was there at Floral Hall bang on time … I was mis-knocking up a dodgy background when he arrives , … “What you going to do with that Tommy “ he asks ….. ‘have you throw a few shapes in front of it’ I offer ! As you know it’d be a cold day in hell when you see Paul showing shapes , … he doesn’t have to ! Always cool in front of the camera , … I think he pays attention as he wants the photographer to ‘get on with it’ ! I think part of our enduring encounters when we meet up is that I can nail what I’m after quite fast.’ 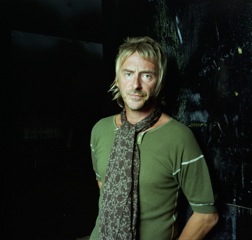 ‘I think Paul was rehearsing the band for a tour – … the equipment laid out as if they were on stage , but facing a huge metal doors. I spent about thirty minutes doing various set ups , Paul as ever wanting me get what I need as well as edging me on to nail it. Like most musicians they love to be doing what they do , as opposed to standing around in a photo studio. So having guitars and equipment around helps them relax. After the session we sent off to a local pub garden where had to rabbit to a journalist where all I had to do was take a refreshing glass of ale.’ 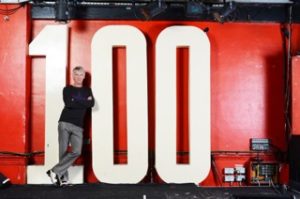 ‘This was my last encounter with Paul , He arrived before my equipment did ! … while gassing he said “you should do a book Tommy’ , I thought he meant a book of ‘all’ the many artists I have photographed over the last forty years . The penny dropped about a month later. It started this series of book from my archive. Paul was an ideal candidate for the first volume , … not only had I been photographing him for a very long time , but also photographing him through his three musical outings , The Jam ,The Style Council and his solo years culminating in this last image of him.’