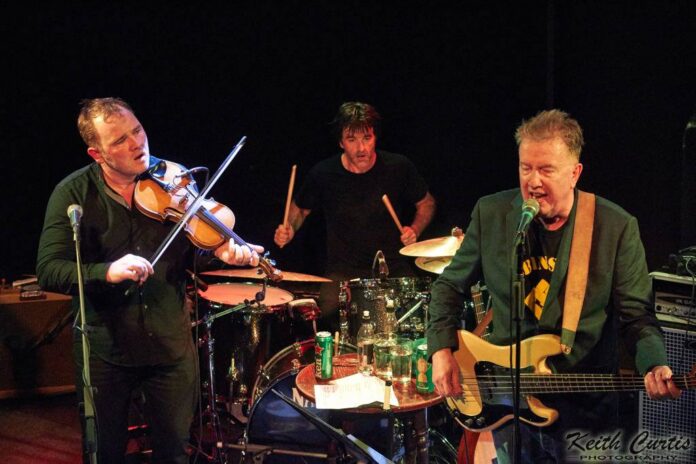 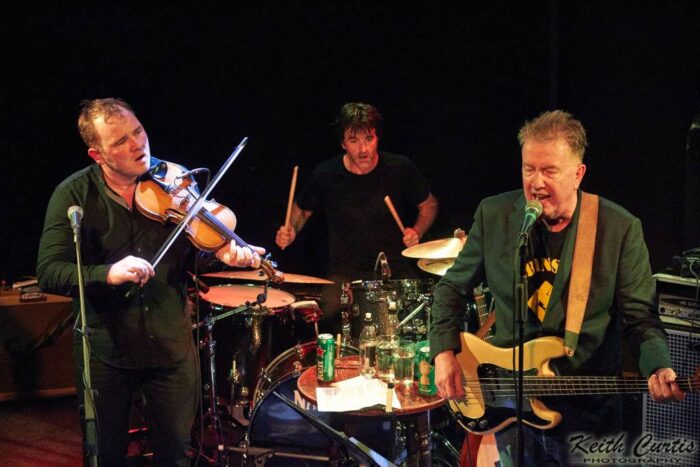 Ian Canty surprised by how Strummer-like Tom Robinson can be, despite being in his 65th year.  Tom that is, not Ian.

It seems oddly fitting that in the week Jeremy Corbyn assumed leadership of the Labour Party that Tom Robinson is beginning his first tour in years, plus he has a new album out imminently.  The first stop was at the Brook Southampton, so I went along, hoping that attention-grabbing and obvious opening line spiked has your interest to read on……..
Playing two sets divided into the old classics and the new LP (Tom said that it would be ok for people to leave after the “old” set, but no-one did), the night proved that the old fire was there and the new material also stood up to scrutiny. The almost two decade break seemed to have just served to sharpen his muse.

Starting the first set with the classic TRB instrumental line up of bass, guitar, drums and Hammond organ (acoustic guitar and fiddle were added later, but the banjo that stood prominently front of stage was seldom even looked at), a very young looking 65 year old Robinson is the only survivor of that era but the new band have captured the old sound and spirit easily. In particular, Adam Phillips has those wonderful Danny Kustow guitar lines that were such a big part of the original TRB brilliantly down to pat. Tom’s voice may sound a bit grittier than in 1978 (might be down to tour rust), but oddly it fitted perfectly with the material culled from “Power In The Darkness” era, benefiting from the roughness giving them a Strummer-like bark at times.

“The Winter Of 79” could easily sound dated and irrelevant; TRB were so tied into a time and the circumstances that were around them, but the more things change the more they stay the same (it was commented later on in the set that Legal Aid is being limited to the extent that only the rich can afford justice) and the power and belief of the performance didn’t make you despair for the way things haven’t moved on but it felt more like a celebration of making it through and still being able to confront the new challenges to freedom of 2015.

“Too Good To Be True”, “Martin”, “Grey Cortina”, “Up Against The Wall” and of course “Glad To Be Gay”, all classics that pepper the first half (I did laugh when Robinson said “I always see a few anxious faces during this part of the set…but don’t worry, you can sing along, you don’t have to be…..glad”. Great comic timing there!), the superior pub rock new wave meeting the 80s pop hits like “War Baby” and “Listen To The Radio” plus of course the stomper “2,4,6,8 Motorway”, it was a great set and it was difficult to see how the second half could match it.

But there’s much promise in the new LP “Only The Now” too. I particularly liked the Viv Stanshall tribute “(Never Drive The Wrong Way Up A) One Way Street”, which is a marvellous Bonzos style romp and the Tom McGuiness (Manfred Mann) co-write of “Never Get Old”. To show he’s not got soft in his old age though, the financial problems made by the fat cats are dealt with in “Risky Business” and the poignant single “Don’t Jump Don’t Fall” is a genuinely touching anti-suicide song.

But it’s not all serious stuff and this being the first time I’ve seen Tom Robinson live I was most struck by the engaging and humourous method in his stage craft – it was a lot more fun than I had imagined it would be as well as being musically very good indeed. The fire was still there indeed, but the down to earth and funny approach kept you listening. Worth getting along to the other dates in the tour I would say!

All words Ian Canty whose author profile is here.   Photo by Keith Curtis co-promoter of the New Forest Folk Festival