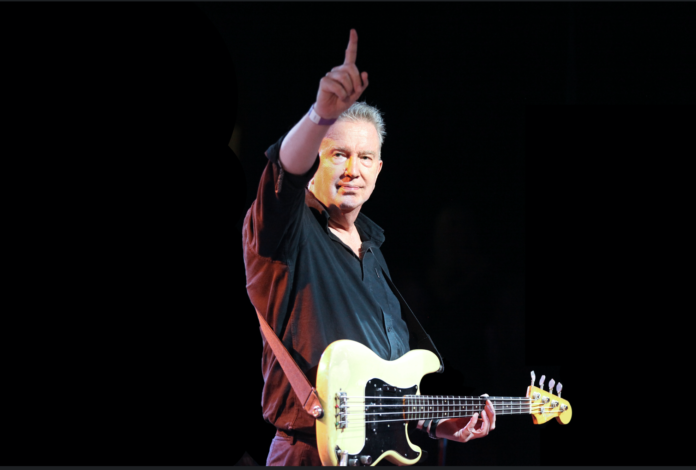 Living proof that it’s Never Too Late, the veteran vocalist and bassplayer hits the motorways in May for an 18 date UK tour. It ends in London on Saturday May 30… where Tom will celebrate his landmark birthday with friends and guests at the O2 Shepherds Bush Empire.

Audiences can look forward to songs and stories spanning four decades from 1978’s rip- roaring TRB album Power In The Darkness to Tom’s acclaimed solo comeback Only The Now in 2015 (see biog).

Expect classics such as Up Against The Wall, War Baby, Glad To Be Gay, Atmospherics: Listen to the Radio, Too Good To Be True, Martin, Grey Cortina, and, of course, the traditional surprise encore 2-4-6-8 Motorway.

Best known today as a radio presenter and new music advocate on BBC Radio 6 Music, Robinson’s decision to tour live again at the age of 69 was given urgency by the sudden death of TRB guitarist Danny Kustow in March 2019 after a short illness.

He says “Losing Danny brought home the importance for all of us of living in the moment – and seizing our chances while we have them. Of course old age brings its problems. But while I’m still fit enough to strap on a Fender bass, this is my chance to go out and pay tribute to the past – and speak out for the future – in the here and now.”

A new live album titled Power In The Now is also planned for May 2020 via State51 – which will include Danny Kustow’s last recorded performance at London’s 100 Club in October 2017.

BIOGRAPHY
Tom Robinson emerged in the late 1970s as a musician and LGBT activist with the Tom Robinson Band (TRB), who were founder members of Rock Against Racism and vocal supporters of Amnesty International. In 1977 TRB’s debut release 2-4-6-8 Motorway hit the Top 5, becoming one of the landmark singles of the UK punk era.

Other hits included Glad To Be Gay, Don’t Take No For An Answer and Up Against The Wall while the band’s debut album Power In The Darkness went gold in the UK & Japan. As a solo artist Tom had further success in 1983 with War Baby and Atmospherics: Listen To The Radio, and co-wrote songs with Peter Gabriel, Elton John, Dan Hartman and Manu Katché.
As a radio presenter, Tom has hosted programmes on all eight of the BBC‘s national radio stations over the last 30 years, and won two Gold Sony Academy Radio Awards. He currently hosts three shows a week on BBC Radio 6 Music

Tom was a member of the Ivor Novello Awards committee for ten years, is a recipient of a BASCA Gold Badge Award, and was awarded a fellowship of LIPA in 2016, in recognition of his support for new music through BBC Introducing. His blog at Fresh On The Net currently offers an open door to new tunes and free insider advice for independent and emerging musicians.

In 2015, at the pensionable age of 65, Tom Robinson strapped on his old Fender bass to record his first new studio album in two decades. Overseen by producer Gerry Diver, ‘Only The Now’ featured John Grant, Billy Bragg, Nitin Sawhney, Nadine Shah, Martin Carthy, TV Smith, Lisa Knapp and Ian McKellen (as The Voice Of God) in addition to Tom’s regular band members Adam Phillips, Andy Treacey, Jim Simmons and Lee Forsyth Griffiths.
In October 2017 the bass came out again to mark the 40th anniversary of TRB’s breakthrough single 2-4-6-8 Motorway with three sold-out nights at London’s 100 Club. With his latest incendiary band, Tom blasted through his debut album ‘Power In The Darkness’ with updated lyrics and a ferocity that belied his 67 years on the planet
Then, tragically, in March 2019 TRB guitarist Danny Kustow died after a short illness. The memorial concert Tom organised at The Scala in London in July 2019 raised over £10,000 for the Critical Care Unit at Bath Royal United Hospitals, where Danny was cared for in his final days. By autumn Tom himself was in hospital for a prostate operation, followed by an enforced period of rest and recuperation.

In 2020 he’s back in the saddle and fighting fit. Ahead of turning 70 on 1 June, Tom’s embarking on an 18 date UK tour with his band, culminating in a birthday celebration at the O2 Shepherds Bush Empire in London on Saturday May 30th.