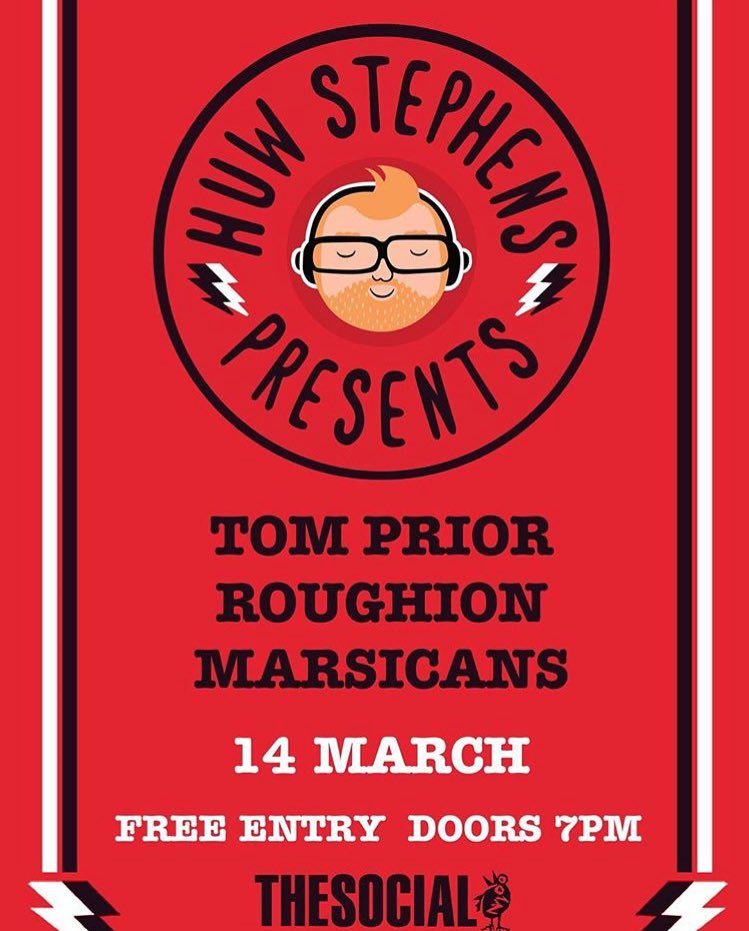 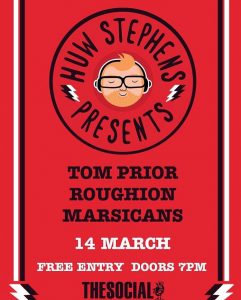 Whilst many of our favourite bands are in Texas this week for South by South West Keith Goldhanger gets to see one or two bands that may be there themselves this time next year.

“It’s like being invited to the Whitehouse by Obama and arriving to discover he’s on a beach in Hawaii” is how Tom Prior described his headline show in the tiny Social in central London this evening.

Radio One DJ Huw Stephens is in the US along with some of the bands we’ve popped into this small venue to watch over the past few years, however what he’s missed this evening is one of the most entertaining ‘Huw Stephen’s presents’ in recent months.

Monthly visits to The Social for one of Huw’s (Free) shows are increasing in numbers for one or two of us. Putting the first band on at 8 and all over by about 10 is just what we need to get through the week on a Tuesday and tonight we run up escalators, skip in between stationary busses in Oxford Street and arrive just in time to see a band that have driven down from Leeds to show us how ridiculously ace they are.

We last caught up with Marsicans at Glastonbury last summer on the BBC Introducing stage and this evening they were just as thrilling as they were that Sunday afternoon. Marsicans are a young band that remind us of Eliza and The Bear on a diet of Vampire Weekend tunes. Their superb on-line tunes are racking up in number now and along with the three of four new tunes aired tonight we suspect the day will come when an album will have anyone here tonight cherishing. This four piece have vocals that are as strong as The Beach Boys, The Hollies or The Monkeys matched with songs that slip and slide and a ferocious pace with the odd anthemic chorus thrown in. To witness this at such an early hour of the evening is enough to draw the breath of anyone watching such an energetic performance.

We learn that Roughion are from Aberystwyth and their first performance in the capital made us pine for the festival fields as their laid back beats and Hot Chip/ Cabaret Voltaire vibe got the legs shaking and shoulders swaying for the short time they performed.

North London’s’ Tom Prior stands at a piano and performs a bunch of tunes that many people will shortly fall in love with. Backed with a sharp guitar and a booming bass and crashing drum it’s clearly noticeable that this chap knows how to pen a tune. He’ll be compared with Jamie T and Alex Turner in the vocal department however these comparisons only last a short time. Looks like Rain is already a big favourite for some of us. Tom Explains it’s a song he wrote as an alternative to punching someone’s lights out. Don’t Worry is another tune that will be picking up new friends for a few years and early indications are that we’ll be seeing Tom again in larger rooms and larger stages in months even years to come.

It’s worth catching all three of these bands whilst you can still see the whites of their eyes.