Tom Petty and The Heartbreakers

What better fitting final to this year’s series of concerts in Hyde Park than an evening with Tom Petty and The Heartbreakers and their federating anthems. After a set by The Lumineers, the audience cheered Stevie Nicks and her band. Playing a career spanning set from her lean days in Buckingham and Nicks all the way to her most recent solo recordings, it was a well oiled performance tailored for this event as Stevie had to take out the stories that she normally tells throughout her show. 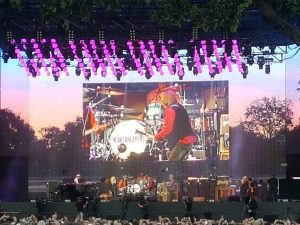 After a prodigiously quick changeover (considering the amount of gear that the Heartbreakers have), the band sauntered on stage and launched straight into “Rockin Around With You” that was originally released on their first LP forty years ago, a good way to start a gig that’s part of their 40th anniversary tour. Far from sticking to a greatest hits option, the band chose to delve deep into their back catalogue with a selection of better known songs sprinkled on top. Petty’s 1989 solo LP “Full Moon Fever” and his 1994 sophomore solo effort “Wildflowers” got the lion’s share of the setlist. The crowd roared with appreciation at each hit single from the former (“I Won’t Back Down”, “Free Fallin'”, “Runnin’ Down a Dream”) but also greeted the guitar pyrotechnics of “It’s Good To Be King” or the intimate folk of “Wildflowers” with fervour. Petty seemed genuinely thrilled by the response (and the size) of the crowd relishing the call and response during “Learning To Fly” and inviting Stevie Nicks to join him for a duet on “Stop Draggin’ My Heart Around”, a solo hit for her in 1981 that was penned by Petty and Heartbreakers lead guitarist Mike Campbell. 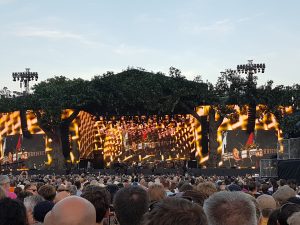 Rightfully proud of his band, Petty took the time to induce each member with a small story. On this tour The Heartbreakers include a duo of backing singers called the Webb Sisters who had previously toured with Leonard Cohen, the two England born vocalists adding a sweet tone to the bands repertoire. Their most recent albums were represented by one track each: “Forgotten Man” from 2014’s “Hypnotic Eye” and a scorching version of “I Should Have The Know It” from 2012’s “Mojo”. Their landmark LP “Damn The Torpedoes” got only one track with “Refugee”, Petty being keen to showcase his own personal favourites with lesser known tracks such as “Walls”, “Crawling Back To You” and “Yer So Bad”. The band closed off with an extended version of “You Wreck Me” (that included an homage to Chuck Berry) and their jangling anthem “American Girl”. 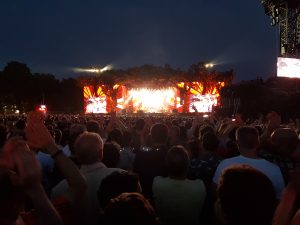